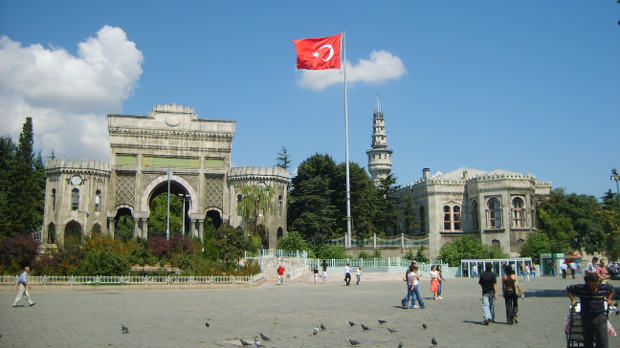 The campus of Istanbul UniversityWIKIMEDIA, DANBURYAfter a military faction attempted to overthrow the Islamic government in Turkey two months ago, the government has been targeting academics, arresting, suspending, and forcing them from the academy. After the failed coup attempt on July 15, the presidents of four Turkish universities and more than 1,500 university deans have been asked to resign. In late July, 167 staff members were reportedly dismissed from Turkey’s Scientific and Technological Research Council (TUBITAK). All academics have also been banned from leaving the country.

The coup, reportedly led by rebel soldiers, came at a time when academics were already under intense scrutiny from the government, following an online petition in which many scientists (and other scholars) protested the government’s treatment of the country’s Kurdish minority. Turkish President Recep Tayyip Erdoğan accused those who signed the petition of supporting terrorist propaganda and helping terrorists achieve their goals....

These recent events underscore the challenges Turkish scientists face as they strive to increase the country’s scientific development and influence, a goal that would require greater international collaboration and institutional independence. For years we have studied how scientists around the world view the social context of science, and Turkish scientists have long been worried about their academic freedom and autonomy.

“The National Academy of Sciences in America is autonomous; the US president doesn’t interfere with their activities,” one scientist told us in an interview. “Turkey is already not strong in science in the world, and the little position it has, has been pushed even farther down the scale and this is really, really upsetting,” said another researcher.

From 2012 to 2016, our team looked at the religious and political views of academic scientists in eight countries and regions, including Turkey. Our data collection included both a survey of 22,525 physicists and biologists and interviews with 609 of these scientists. The scientists were situated at elite and non-elite universities and research institutes and spanned all career stages. We received 9,422 completed responses for an overall response rate of 42 percent (as defined by the American Association for Public Opinion Research). All surveys and interviews were completed under conditions of complete confidentiality.

Our interviews with scientists revealed that Turkish academics feel increasing pressure from the government, and that political and religious conformity is valued at the expense of scientific progress. Turkish scientists were concerned that the vibrant Islamic sentiment in the country would prevent science from flourishing. One biologist told us that since the current government took office, “it’s going in this direction that when I give a lecture,” she said, “I have to think twice about saying something about evolution, for example.”

Scientists also said that funding decisions and appointments to the Turkish Academy involved favoritism toward certain religious groups and the suspension of a merit-based process. “There is more money being doled out to certain universities that are not strong but they have more associations with the religious leadership,” according to one biologist. “There were scientists who were good,” said another biologist, “but they had religious views that meant they were discriminated against.”

Based on our interviews, we have ascertained that Turkish scientists feel political and religious conformity with the government is too highly valued under the current regime.

Surprisingly, there were some researchers who supported some state influence in higher education, in light of the pressures that religious academics may have faced under a previous regime of intensive secularism. According to one physicist, “If past governments were implementing negative discrimination against religious people, maybe right now [religious scientists are] being exposed to positive discrimination. I mean, it depends on the atmosphere, the time.”

But if Turkey seeks to raise its scientific profile, science must be free from such interference. Academic researchers will need to be able to travel and work internationally to increase collaboration, and they will need to be granted institutional independence and autonomy, as well as religious and academic freedom, the kind of freedoms that a truly global science needs.