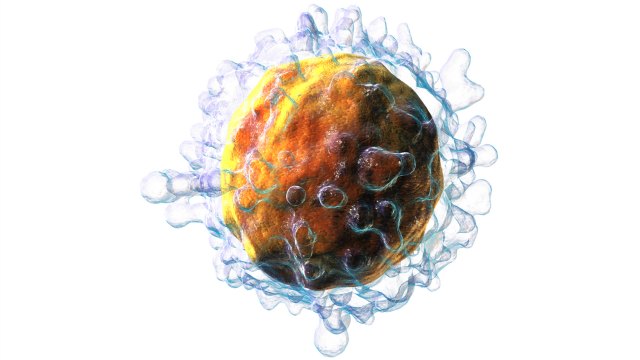 WIKIMEDIA, BRUCEBLAUSThe immune system is known for its ability to remember its response to pathogens, leading to more efficient clearance of the same pathogen upon reinfection. This immunological memory forms the basis of one of the most important medical achievements: infection prevention through vaccination.

Any memory response to a pathogen, vaccine, or tumor starts with naive T cells. These cells are produced by the thymus and each have a unique T-cell receptor, recognizing a specific part of a pathogen. Critical for every T-cell response is the activation of T cells from their naive state. Only those naive T cells that recognize a pathogen via their T-cell receptors lose their naivety and differentiate into effector cells, which can kill infected cells or give help to other immune cells. Following pathogen clearance, most of the effector cells will die while a small pool of T cells develops into memory T cells, responsible...

Any memory response to a pathogen, vaccine, or tumor starts with naive T cells.

Although the naive T-cell population is known for its enormous diversity of T-cell receptors, in terms of other characteristics it is generally considered to be a quiescent and homogeneous population of cells, waiting to be activated. In Nature Reviews Immunology, we review recent findings that demonstrate that naive T cells are much more heterogeneous in terms of phenotype, function, dynamics, location, and differentiation status than previously appreciated. In fact, the naive T-cell pool forms a whole spectrum of cells with different characteristics.

For a long time, research on naive T cells has focused purely on their numerical presence. It is now becoming clear that not only the number of naive T cells, but also the composition of the naive T-cell spectrum, can change with age and in different diseases. This revised view of the naive T-cell pool may have important implications for its assessment and role in health and disease.

It is attractive to speculate that especially early in life, when effector and memory formation is still low, naive T cells are part of the rapid protective response against pathogens.

Vaccination, for example, could benefit from a deeper understanding of the naive T-cell pool. Although the success of vaccination is beyond dispute, important challenges remain. One of these challenges is the successful vaccination of newborns and elderly individuals, who are most vulnerable to infections, but paradoxically respond least efficiently to vaccination.

In the elderly, the T-cell pool is skewed towards memory cells. Because the thymus produces progressively fewer naive T cells with age, the loss of naive T-cell receptor diversity is generally held responsible for the weak response to vaccination. If the loss of specific naive T cells in elderly individuals is indeed the cause of the decreased response to vaccination, protecting the elderly may require vaccination at an earlier age. If the T-cell receptor diversity of naive T cells in the elderly is not a limiting factor, vaccine strategies for the elderly may instead have to focus on boosting the magnitude of the immune response.

Remarkably, the cause of the impaired vaccine response of newborns is completely different. The newborn immune system is skewed toward naivety, and it has long been assumed that naive T cells are incapable of any kind of protective immune response. This view has been challenged, however, by recent findings (that demonstrated that very young naive T cells that have recently egressed from the thymus produce an important signaling molecule (cytokine) associated with an active immune response. This signaling function is lost when naive T cells mature upon signals from the environment.

These very young naive T cells are present in large numbers in neonates and young children. They are not only found in the blood but also reside in tissues such as the gut. These cells specifically express receptors that can sense inflammation. It is therefore attractive to speculate that especially early in life, when effector and memory formation is still low, naive T cells are part of the rapid protective response against pathogens. This may also provide opportunities for targeted immunization strategies in neonates, such as the use of adjuvants that specifically stimulate the young naive T cells.

The implications of these new insights into naive T cells are not limited to vaccination. In situations in which the immune system needs to recover, such as after chemotherapy or post stem cell transplantation, it is important to monitor and distinguish the full spectrum of naive T cells. Looking below the seemingly calm surface of naive T cells may reveal aspects that can guide strategies for optimizing vaccination, immune recovery, and healthy aging.

Theo van den Broek is a postdoc at the Boston Children’s hospital and Harvard Medical School. José A.M. Borghans and Femke van Wijk are Associate Professors at the Laboratory of Translational Immunology at the University Medical Center Utrecht, the Netherlands.