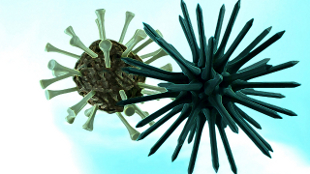 The definition of life is as enormous a problem as the phenomenon of life itself. One could easily collect from the literature more than 100 different definitions, none satisfactory enough to be broadly accepted. What should the definition contain, to be suitable for all varieties of observable life? Humans, animals, plants, microorganisms. Do viruses also belong to life?

There are two tendencies in the attempts to define life. One is to formulate an all-inclusive definition, accommodating life's attributes and manifestations from all levels of complexity.1 Another tendency is to reduce the attributes to only those which are common to all forms of life.2 But we do not know what would be the “simplissimus” from which everything, probably, started. Darwin speculated 140 years ago,3 not knowing yet about nucleic acids: “…we could conceive in some warm little pond, with all sorts of ammonia...

Viruses are simple, having often only protein coat and one or a few molecules of nucleic acids. But this is only a minute part of their description. For reproduction they require the whole complexity of the higher organisms in which they reside. But the “individuality” of the virus is encoded in its genome. Viruses do not invade any arbitrary organism, but rather target specific host species, dictated by the virus’s own genes.

Still, the virus is a good clue in the search for the simplissimus. This was appreciated first by Sol Spiegelman in late ’60s, who observed the process of self-reproduction of the viral RNA by imitating intracellular conditions in a tube.4 All the replicating RNA needed was the building blocks—nucleotides, taken from the lab’s shelf, and purified natural protein RNA-replicase, encoded in the viral RNA and produced by host cells. The system not only copied the RNA endlessly, but also displayed ability to mutate, to change the sequence of the RNA to any degree of dissimilarity with original viral RNA.

Another extremely simple system found in nature is viroids, the most primitive plant disease agents, which consist of only RNA. They invade a plant and force it to produce the viroid RNA. This RNA does not encode any proteins, but serves merely to direct the expression of relevant host proteins and cellular processes. That is, the viroid, if considered as a living organism with non-traditional life cycle, is just an RNA, with the sequence instructing its own propagation (via the host), all ingredients and copying devices provided by the host’s cells.

Both of these examples are not the simplest, though, as they require enzymes provided by more sophisticated organisms. But could not we artificially synthesize the replicase or a simplified version? What about removing the replicase and relying upon RNA only? After all, RNA is a “ribozyme” with many catalytic properties typical of protein enzymes. If some primitive version of RNA (or perhaps even DNA) is capable of self-replication, and respective monomer units required for the synthesis could be produced abiotically or artificially in some reasonable setup imitating primordial conditions—the nucleotide analogs to the abiotic synthesis of natural amino acids observed by Stanley Miller in his model system of early Earth atmosphere, for example5—the RNA itself would become, probably, the simplest living entity.

Whether we stop the reductionist strive here, at replicating RNA, or continue even further down, to the variety of abiotic syntheses, depends on what we define as life. The border between life and nonlife may, actually, be placed anywhere within the realm of the abiotic processes. Oligonucleotides, oligopeptides, nucleobases, amino acids, sugars—all could be considered as very primitive and simplistic life forms, if the definition is extended (and simplified) to the very elements. Before 1828, when organic substances could be found only within living matter, the popular idea of a “vital force” reigned. In those days, one could draw the life/nonlife border at the first appearance of the small “vital force” (i.e., organic) molecules. Abiotic synthesis of urea by Friedrich Wöhler in 1828 dethroned this common belief.

The hypothetical primitive RNA replication process has a degree of sophistication that separates it from mere chemistry: it copies itself and allows copying mistakes, which themselves are copied in future generations. In other words, this is the process of self-reproduction with variations (as in Spiegelman’s system), not just organic synthesis. This is the very definition of life suggested by the developing theory of early molecular evolution.6,7 The same formula is derived by “word count” analysis, which yields the most frequently used words, of more than 100 known definitions of life (2). The recent discovery that both genes and genomes appear to have emerged originally as simple tandem repeats, with subsequent mutations increasing their complexity8,9 makes such definition even more attractive. One can view a genome as molecular habitat for emergence of “new life” in the form of expanding and mutating simple repeats. In that sense, and under the above minimalistic definition, life never stopped emerging, starting some 4 billion years ago with replicating RNA,6,7 and continuing to this day within the genomes of every living organism.

Edward N. Trifonov is a professor at the University of Haifa in Israel and Masaryk University in the Czech Republic. He can be contacted at mailto:trifonov@research.haifa.ac.il.

3. C. Darwin, as quoted in M. Calvin (1969) Chemical evolution. Molecular evolution towards the origin of living systems on earth and elsewhere. Clarendon, Oxford.