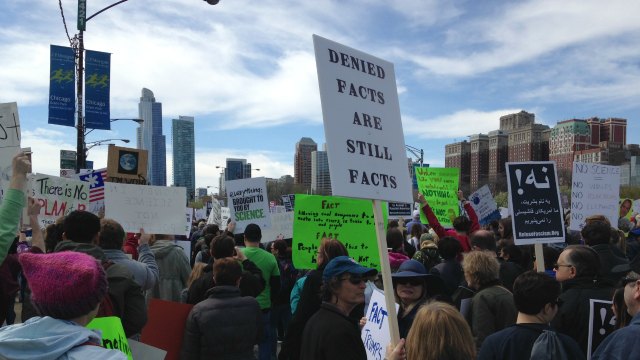 March for Science in Chicago, April 22, 2017KERRY GRENSOn April 22nd, the March for Science drew hundreds of thousands of participants to 610 satellite marches around the world. The most unique feature of the march—scientists and science allies becoming vocal participants in a protest movement—was surprisingly the easiest thing to materialize. Getting the activist community to temper its passionate prior beliefs was a lot harder.

Experienced activists know the value of a wide tent. You build movements, they’ll tell you, by letting as many groups as possible sign on, letting as many ideas and agendas as possible into the fold. There’s truth in that. Working with experts and those with experience in this space is appealing. After all, the culture of science encourages collaborations, and the world of activism ignites the public to action. People arrive at political beliefs in a lot of ways, and not all of...

However, a striking instance of the dangers we face in terms of beliefs co-opting science came when an organization that promotes the idea of “intelligent design” attempted to partner with the March for Science. Intelligent design is one of several neo-creationist ideologies. The conclusion-before-evidence approach of creationism is exactly the sort of thinking the march was (intelligently) designed to oppose. We wanted to include diverse viewpoints, but this was clearly a group whose efforts were not aligned with our purpose.

Of course, by limiting our discourse to scientific evidence, we can appear elitist or hardheaded. I urge you to hold your (peer-reviewed) ground and rebuff advances from those who seek to exploit the word “science” to advance their own unscientific agendas. At the same time, we’re opening a door that goes both ways. Becoming more politically involved means listening to new voices that we haven’t heard before, and sometimes what they have to say will be uncomfortable—yet valuable. We will not be able to change the world without changing ourselves.

What we’re fighting for is the best tool we have for reducing human biases and achieving ever greater approximations of the truth about the world. It’s a method that can improve human prosperity, and give us long lives free of infectious disease and with enough food to survive.

But it can also be used for great evil. That’s why we need to stay involved, and why it’s so important to seek the input of the sort of experienced advocates scientists might otherwise shun, like those with experience planning marches and demonstrations not strictly focused on science, such as moral issues surrounding economic policy. Washing our hands of the moral implications of science, and the political decisions made with it, makes us complicit in how that tool is used, good or bad.

Our morality guides our politics, as should scientific evidence. Science can tell us what is factually correct, but it does not necessarily tell us what is morally right. That’s why we need to exercise caution and respect the passionate approach of many non-scientists. Let moral beliefs guide how we use science, and what decisions we make once the scientific evidence has been considered—but the converse should never be true. We should never let our moral feelings guide what science we believe and what evidence we reject.

The greatest threat to science isn’t people who see themselves as anti-science, if there are any such people. What we need to guard against are well meaning people operating outside their own area of expertise, who sometimes cherry pick evidence to support their prior beliefs. Accepting the tool of science means accepting all of the results it produces, not just the ones you want to be true. The didactic approach of educating science denialists on individual topics, such as climate science or agricultural biotechnology, is important, but in many ways it is treating the symptom, not the disease.

We need to educate the public, and especially advocates of scientific skepticism, about who bears the burden of proof, about how to read primary sources and academic journal articles, and about how to think critically about evidence. When becoming advocates we need to always let evidence guide belief, and not let belief guide evidence.

Scientists and activists can learn to work together. The March for Science was unprecedented and a testament to the hard work of thousands of volunteer organizers across the world working toward a common goal. In some cases that meant scientists like myself diving into the unfamiliar land of activism, and in other cases the converse. Let’s foster these relationships with care and good will, but always keep the science sound.

By bringing together the stereotypically (though not actually) cold and unfeeling world of science with the hot-blooded world of activism, the march was an incredible success in demonstrating just how important science is to the world, and just how strongly we’ll fight efforts to weaken it.

Jonathan M. Berman is a co-chair of the March for Science and a postdoctoral fellow at the University of Texas Health Science Center at San Antonio.