“Whether it holds a record of ancient life, was food for life, or has existed in the absence of life, organic matter in Martian materials holds chemical clues to planetary conditions and processes,” Jennifer Eigenbrode, a biogeochemist at NASA’s Goddard Space Flight Center and lead author on one of the studies, says in a statement.

Since 2012, the Curiosity rover has been traversing the surface of Gale Crater, possibly an ancient lake bed, slowly making its way up the side of Mount Sharp that lies within the crater. The rover drilled into sedimentary rock, compounded over billions of years, at four sites in the... 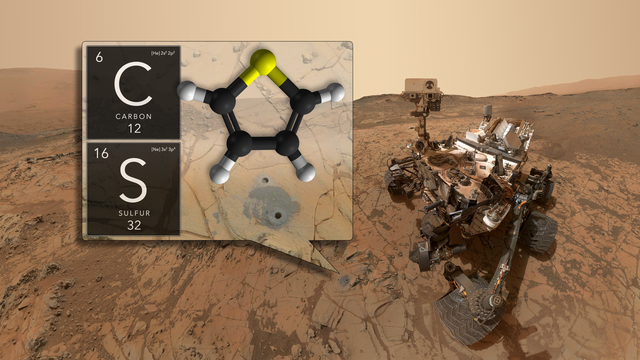 According to Science, these carbon-, hydrogen-, and sulfur-bearing compounds had spectral patterns that are similar to those of kerogen, a constituent of fossil fuel, found on Earth. In the case of Mars, these organic molecules may have formed due to the planet’s ancient volcanoes or may be a remnant of ancient life.

Ultraviolet radiation and chemicals in the soil would break down any organic materials on the Martian surface. Curiosity’s discovery of organic material only 5 centimeters below the surface “bodes well,” says Eigenbrode in the statement.

“This is very promising for the preservation of potential ancient life on the planet,” Kirsten Siebach, a planetary geologist at Rice University who was not involved in the work, tells The Guardian.

In another study, researchers obtained new information from atmospheric methane measurements Curiosity has been collecting over the years. Their analysis has revealed an annual, seasonal cycle in the levels of the gas. The result indicates that there is likely a reservoir leaking out greater amounts of methane in the summer compared to the winter. “The observations we see do not rule out the possibility of biological activity, [but] it’s not a smoking gun for it,” Christopher Webster, a senior research scientist at NASA’s Jet Propulsion Laboratory and coauthor on the study, tells National Geographic.

However, “we’re in a really good position to move forward looking for signs of life,” Eigenbrode tells Science.