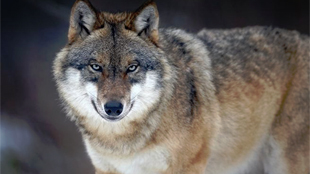 Gray wolfWIKIMEDIA, MARTIN MECNAROWSKIDomestic dogs evolved from a group of wolves that came into contact with European hunter-gatherers between 18,800 and 32,100 years ago and may have since died out.

This origin story comes from a new study that compares DNA from dozens of dogs and wolves, including 18 ancient fossils. The results, published today (November 14) in Science, provide the clearest picture yet of where, when, and how wild predators came to be man’s best friend.

“It really is a sea change from the little bits of fragmentary DNA that have been reported in the past,” said Gregor Larson from Durham University in the U.K., who was not involved in the study. “It includes really old material from a wide range of sites.”

The new paper follows two earlier studies that looked at the genetic signatures of domestication in dogs, and came to differing conclusions about...

Both studies compared the genes of a wide variety of living dogs and wolves, but modern samples can be deceptive. Dogs and wolves diverged so recently that many of their genes have not had time to separate into distinct lineages. They have also repeatedly hybridized with each other, further confusing their genealogies.

To deal with these problems, a team led by Olaf Thalmann from the University of Turku in Finland analyzed mitochondrial DNA from 18 fossil canids. They compared these ancient sequences to those from 49 modern wolves and 77 modern dogs, and built a family tree that charts their relationships.

The tree conclusively pinpointed Europe as the major nexus of dog domestication. It identified four clades of modern dogs, which are all most closely related to ancient European canids rather than wolves from China or the Middle East. “We didn’t expect the ancestry to be so clearly defined,” Thalmann told The Scientist.

“This suggests that the population of wolves in Europe that gave rise to modern dogs may have gone extinct, which is plausible given how humans have wiped out wolves over the centuries,” he added.

These molecular dates fit with fossil evidence. The oldest dog fossils come from Western Europe and Siberia, and are thought to be at least 15,000 years old. By contrast, those from the Middle East and East Asia are believed to be 13,000 years old, at most. “The archaeologists would be happy,” said Larson.

The dates also make it unlikely that dogs were domesticated during the Agricultural Revolution, which took place millennia later. Instead, they must have first associated with European hunter-gatherers. They may have assisted humans in bringing down large prey, or could simply have scavenged leftover carcasses. Either way, their association with humans grew stronger and stronger, until they eventually evolved into domestic dogs.

However, Thalmann acknowledged that his team’s analysis does not include any ancient DNA from the Middle East or China, nor nuclear DNA from any of the fossils. In other ancient DNA studies, nuclear DNA sequences have revised the evolutionary stories told by mitochondrial ones.

“Who knows what we would find if we had ancient canid samples from East Asia or elsewhere, or were successful in amplifying nuclear DNA from ancient canids,” said Adam Boyko from Cornell University, who was not involved in the study, via email. “But that shouldn't detract from the great work they were able to do here,” he added.

Larson cautioned that the paper is not the final word on canine origins. “It would be a mistake to jump and say that dogs were domesticated in Europe and not anywhere else,” he said. “We know pigs were domesticated independently in China and Turkey, so there’s no thinking that dog domestication had to happen in just one place.”

Indeed, Thalmann’s team showed that the famous Goyet dog—a 36,000 year old Belgian skull, supposedly belonging to the oldest known dog—is not directly ancestral to modern dogs. Instead, it represents an ancient sister lineage that died out. The same is true for other old specimens from Belgium and Russia’s Altai Mountains. “Maybe they were trial domestications that were not successful,” said Thalmann.