Dogs Are Teaching Machines to Sniff Out Cancer

The idea of using dogs’ noses to detect the scent of human cancer has been around for decades, and researchers have even tried building machines to do the job, but none have been able to match the sensitivity of man’s best friend. Rather than try to compete with evolution, scientists decided to bring in the experts. In a proof-of-concept study, researchers used dogs to train a machine learning algorithm to detect prostate cancer, the second most common cancer in men. Because the study included a small number of samples—from 50 men, of whom only 12 had a positive biopsy—the dogs didn’t achieve the sensitivity and specificity that other canines have been able to, but it’s a promising first step, according to Marc Aubreville, a professor of image understanding and medical application of artificial intelligence at Germany’s Technische Hochschule Ingolstadt, who wasn’t involved in the work. “It’s really interdisciplinary what they’re doing and that’s kind of cool,” he says. “I think the method is sound . . . but I would really have loved to see more samples and better proof that this really works with machine learning.”

New Understanding of Metastasis Could Lead to Better Treatments

In 2013, Memorial Sloan Kettering cancer biologist Adrienne Boire had an encounter with a patient that would dictate the course of her career. The woman had very basic questions about how and why her cancer had spread into her spinal fluid, and Boire realized she couldn’t answer them. Indeed, many questions remain about how exactly cancer cells are able to colonize and proliferate inside new tissues, a process called metastasis. But in the years since, Boire and others have learned some of the answers: rather than a late stage of cancer, metastasis is now considered to be a complex process that can begin much earlier, and scientists have also found that cancer cells can sometimes lie dormant for years before awakening, facts that have opened up new avenues for monitoring and treating metastatic cancers. Ideally, Boire says, researchers will develop ways to dampen metastasis completely, putting “me and my clinic out of business. . . . It would be really lovely to not have any more patients to treat.” 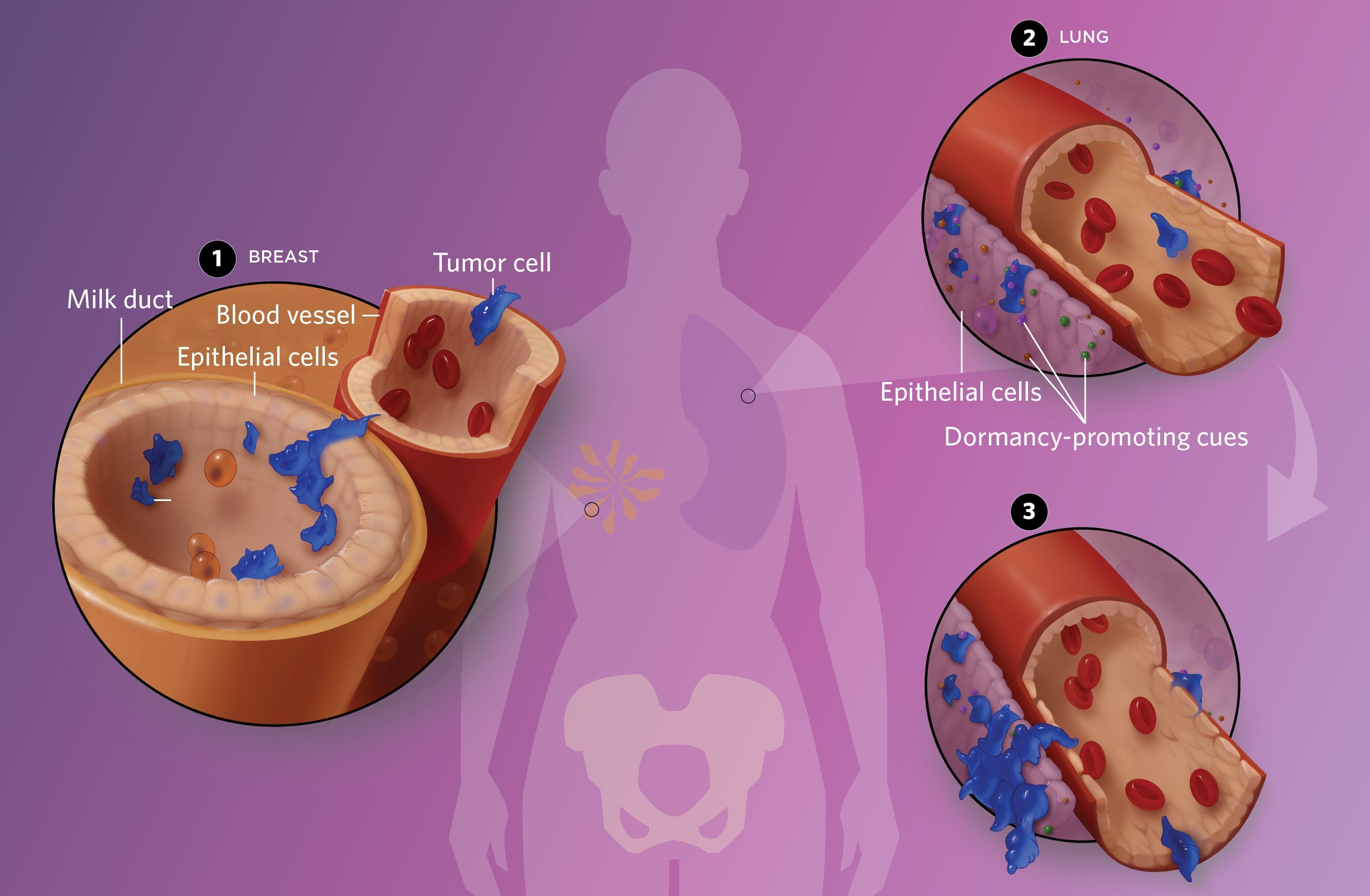 Cancer Cells Parasitize Other Ones to Survive: Study

Tumor cells are known for their impressive heterogeneity—it’s a major challenge for cancer treatments, as each cell may be slightly different from its neighbor—and in some cases, the loss of certain genes or proteins can prompt cells to adopt new lifestyles. Researchers at the University of Minnesota found that cancer cells lacking a DNA repair protein complex called the Ku complex became parasitic, attacking neighboring tumor cells to access their cytoplasmic material. Beyond that, the parasites sometimes entered other cells and remained inside, intact, before exiting later on. This, says molecular biologist and study coauthor Nurten Saydam, may allow cancerous cells to adapt to genetic stresses in their microenvironment and ultimately metastasize. “Parasites go into the cell. They hide there. And then when everything is all over, they can come out and grow much better.”

Cancer May Be Driven by DNA Outside of Chromosomes

Paul Mischel was baffled in 2012 when tumors in his glioblastoma patients seemed to be evolving in ways that defied classical genetics. Despite aggressive treatments with drugs that targeted a growth-promoting oncogene, the tumors developed resistance within two weeks.  He and his colleagues found that the DNA driving this resistance resided not in the patients’ chromosomes, but in extrachromosomal DNA floating within each cell’s nucleus. This previously overlooked ecDNA has since been found to promote extremely high levels of oncogene transcription and even create entirely new gene regulatory interactions, all of which conspire to make cancers more robust. But it has also revealed new options for treatments, leading Mischel and his team to cofound a company, Boundless Bio, to identify and develop new ways to treat ecDNA-based cancers. “It is exciting to see mounting interest and an influx of talented investigators aiming to decipher the key aspects of ecDNA biology,” he writes. “We look forward to the development of new tools, new collaborations, and new treatments for patients.” 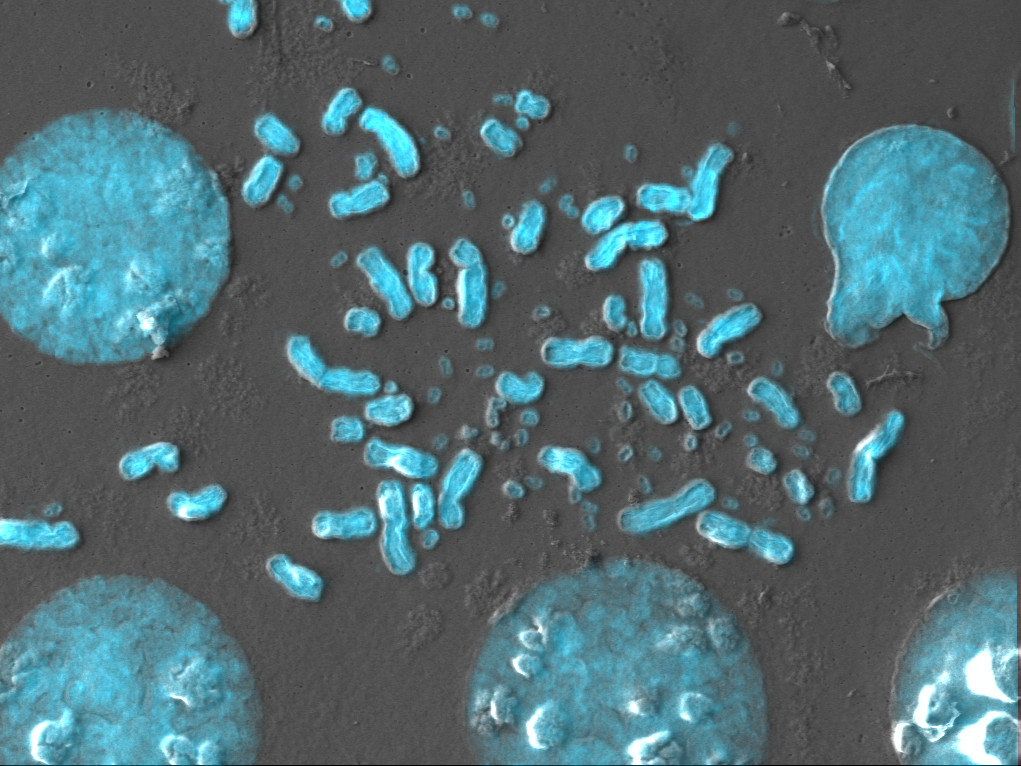 Extrachromosomal DNA is spotted in this false-colored scanning electron microscopy image of lysed colon cancer cells. (Large spots are intact nuclei from other cells.)
KRISTEN TURNER, PRINCIPAL SCIENTIST AT BOUNDLESS BIO; PHOTOGRAPH TAKEN WHEN SHE WAS A MEMBER OF THE MISCHEL LABORATORY

Blind mole rats not only look strange—where are their eyes!?—they’re odd genetically, too. These rodents are extremely long-lived and naturally cancer resistant, thanks in part to an increased production of the inflammatory cytokine interferon beta (IFN-β) in precancerous cells that induces their death. Researchers recently traced this unique cancer-fighting ability to DNA sequences in the mole rats’ genomes that can move around by copying themselves and reinserting into new locations. These “jumping genes” are found across the tree of life, including in humans, but are often silenced through methylation. In mole rats, however, the researchers discovered that retrotransposon RNAs and IFN-β are more abundant in the quickly proliferating cells, while levels of the enzyme that methylates DNA are lower, findings they were able to replicate artificially in human cells. “The paper describes an important new mechanistic insight into the way one can trigger inflammatory signals in cancer cells to either kill them directly or make them vulnerable to cancer-killing therapies,” says Johns Hopkins School of Medicine cancer biologist Stephen Baylin, who was not involved in the study. “The importance of it is really quite profound.”