The University of Oxford is considering what to do about replacing the director of a high-profile center for studying ancient DNA who resigned 6 weeks ago in the wake of an investigation into his conduct, a spokeswoman has told The Scientist.

Geneticist Alan Cooper had been director of the Henry Wellcome Ancient Biomolecules Centre since it was established in 1999, but on April 22, he resigned his post. He had been the subject of an internal investigation by the university relating to allegations that he had violated the university’s code of practice on academic integrity in research.

“The allegations relate solely to material included in grant applications and not to published research results or the conduct of ongoing research,” Oxford said in a statement. In accordance with university rules, however, it would not provide any details of the investigation.

The Ancient Biomolecules Centre was built with funding from the Wellcome Trust and the UK government, and provides a sterile, physically isolated environment in which DNA samples can be analyzed without the risk of contamination from the local environment. Recent work at the lab has focused on the phylogeography of the wild boar, the relaxed clock model, and the rise and fall of a population of bison.

Cooper led a research group at the center, but his departure leaves it without a senior investigator. Oxford said it was considering what to do about replacing him. “Discussions are currently underway concerning the most appropriate way to fill the vacancy created by Professor Cooper’s resignation,” the spokeswoman said.

“It would have to be an external appointment,” said Terry Brown, professor of biomolecular archaeology at the University of Manchester. “There are a number of researchers in the UK and elsewhere who could do an excellent job.”

“I’m sad that Alan is leaving the UK, but there will still be a number of very good ancient biomolecules labs in this country,” he told The Scientist via E-mail. Researchers in Bristol, York, London, Bradford, and Cambridge, for example, all do work as good as Oxford’s, he said.

Peter Forster, from the molecular genetics lab of the McDonald Institute for Archaeological Research at the University of Cambridge, took a slightly different view. “There is little ancient DNA [work] going on in Britain, and Alan's departure has not improved matters,” he told The Scientist in an E-mail.

“It needs to be remembered, however, that all of our conclusions on the evolution of humans and other species are based on the analysis of modern DNA, which give us a glimpse into the past via mathematical reconstruction methods,” Forster added. “Ancient DNA is good for offering the occasional opportunity to confirm directly the prehistoric scenarios we reconstruct, and is thus much appreciated.”

Cooper, meanwhile, has been awarded a Federation Fellowship at the University of Adelaide in Australia.  He told The Scientist that he would be establishing the Australian Centre for Ancient DNA. The new center would “have technical facilities of an internationally leading standard, equalled only by one or two other labs in the world,” he said.

“I was extremely pleased to accept the Federation Fellowship position in September 2004 as it presented a unique opportunity to bring a high-tech ancient DNA center to the Southern hemisphere, where little ancient DNA research has been done to date. The research projects I hope to be working on include studies of the environmental effects of climate change, human migration and impact, megafaunal mass extinctions, and related areas—all of which have special importance in Australia,” Cooper said. 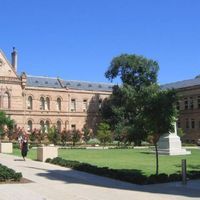