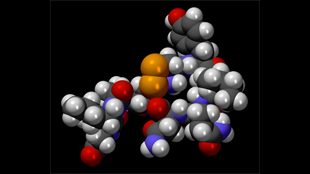 OxytocinWIKIPEDIA, MINDZIPERThe hormone oxytocin is usually associated with positive traits like trust, cooperation, and empathy, but scientists have now found that it can make people more dishonest when their lies serve the interests of their group.

“This is the best evidence yet that oxytocin is not the ‘moral molecule,’” said Carsten de Dreu from the University of Amsterdam, who co-led the study, which was published today (March 31) in PNAS. “It doesn’t make people more moral or immoral. It shifts people’s focus from themselves to their group or tribe.”

These findings are “consistent with more and more research showing that the effects of oxytocin aren’t straightforward,” said Carolyn DeClerck from the University of Antwerp, who was not involved in the study. “They can be social or antisocial, depending on the situation and on individual differences.”

Decades of animal studies have shown that oxytocin is involved in social...

But recent studies have shown that oxytocin has a dark side. Depending on the context, it can hinder trust, reduce cooperation, or trigger negative feelings like envy and schadenfreude. In 2011, de Dreu found that the hormone could make people biased toward others from their own ethnic or cultural group.

His latest study, conducted by Shaul Shalvi from Ben-Gurion University of the Negev in Israel, adds to this subtler portrait of the hormone’s role. The duo ran a double-blind study in which 60 volunteers played a simple game, after inhaling either oxytocin or a placebo.

Working in teams of three, the recruits were asked to predict the toss of a virtual €1 coin and, once they saw the outcome, to say whether they had guessed correctly. A correct answer could gain them money, lose them money, or do nothing, and any winnings or losses would be divided evenly between the three anonymous teammates.

The duo found different results when they repeated their experiments, this time telling volunteers that their decisions would affect their own earnings, but not those of their teammates. This time, oxytocin had no effect on their lying.

These results showed that oxytocin could boost dishonest behavior, but only when it served the group and not the individual. “It can actually make people more immoral in the group situation because they’re deceiving, and stealing money from, the experimenter,” said de Dreu.

Even then, he and Shalvi found that the hormone’s effects varied depending on the situation. It had no apparent influence on the volunteers’ behavior when nothing was at stake, or when they stood to lose money. In the latter case, the oxytocin-sniffers under-reported their correct guesses just as often as did the volunteers that inhaled the placebo. De Dreu suggested that humans show such a strong aversion to loss that oxytocin has very little bearing on behavior in this context.

These results fit with the idea that oxytocin is a general social chemical that can wield opposing influences on human behavior in different contexts. “Some people may say that it’s still the ‘love hormone,’ because they love their in-group, but these people are in a very minimalistic setting and they don’t know the others in their group,” said de Dreu. “Oxytocin is causing a more general shift from self-interest to group-interest. It’s simplistic and wrong to call oxytocin a ‘moral’ molecule.”