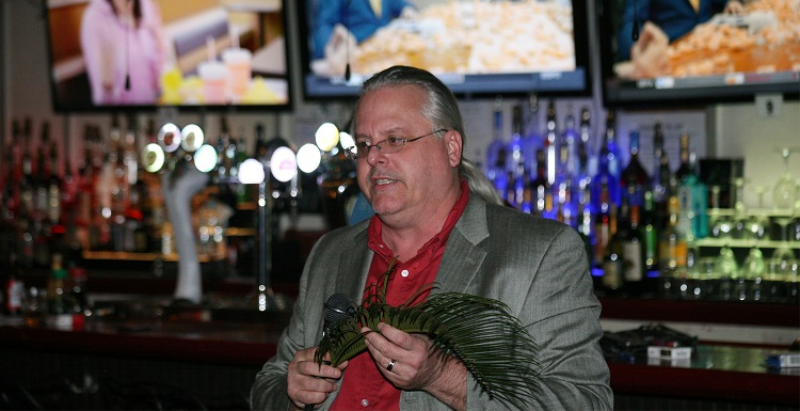 Brian Axsmith, a paleobotanist at the University of South Alabama who discovered many significant fossils in the southeastern United States, died May 5 from complications associated with COVID-19. He was 57.

Axsmith was born in Stowe, PA, and raised in suburban Philadelphia. His sister Doreen Axsmith Inmon tells FOX10 he had a love of dinosaurs and paleontology from an early age. In an email to The Scientist, Timothy Sherman, a biologist at the University of South Alabama in Mobile, says Axsmith specifically became interested in Mesozoic plant fossils after finding them near his hometown in the Newark Basin when he was an undergraduate student.

Axsmith received a bachelor’s degree in biology from Millersville University of Pennsylvania and a doctorate in botany from the University of Kansas in 1998. Following postdoctoral training at the same institution, Axsmith took a job at the University of South Alabama in Mobile in 1999, where he was a professor of biology until his death.

“He had been doing a lot of work reinvigorating paleobotany down in the southeastern US, where some of the last publications had come out in 1918,” Dana Ehret, a curator at the New Jersey State Museum, tells The Scientist. Ehret says Axsmith rediscovered some of these old fossil sites in Alabama and Mississippi and resumed excavating them, discovering new specimens and species. His research focus was Pliocene flora from the Citronelle Formation local to Mobile.

Some of Axsmith’s most significant discoveries included the fossilized pollen and needles of the eastern white pine (Pinus strobus) in Alabama and Mississippi. Currently, the species is only found in the northeastern United States and Canada. Axsmith also uncovered the earliest known post-Eocene fossil record of ironwood trees in North America.

Axsmith also discovered fossilized wingnuts (Pterocarya) in the Citronelle rock formation in Mobile County, Alabama. Present-day wingnut species are only found in Asia, but Axsmith’s find indicated that the species once existed in the southeastern United States as well. In 2019, a genus of plant fossils, Axsmithia, from the Triassic of Antarctica, was named in his honor.

Ehret recalls the infectious enthusiasm with which Axsmith performed fieldwork. “Working with him out in the field, he was a big guy, but he would be swinging a pickaxe over his head for hours on end, pulling all these fossil specimens out of the sediments. You could see that childlike fascination with him.”

Students at the University of South Alabama, where Axsmith taught evolutionary biology, remember him as a fun and engaging lecturer. “He challenged you to think—regardless of what you thought about evolution. He is one of those if I could just sit there and listen to him hours on end—I would do it. He was very intriguing,” Charlie Crabtree, a former student, tells FOX10.

Axsmith is survived by his wife Jennifer, son Jeffrey, and sister Doreen.