A team has extracted what could be DNA molecules from a 125-million-year-old fossil dinosaur, according to a study published last month (September 24) in Communications Biology. But other experts have voiced caution or outright skepticism about the findings.

Gizmodo reports the oldest sequenced DNA belongs to a million-year-old woolly mammoth. DNA is a relatively fragile molecule, and dinosaurs went extinct 65 million years ago, so the idea of sequencing DNA from these ancient creatures has so far remained science fiction.

In the new study, paleontologists from the Institute of Vertebrate Paleontology and Paleoanthropology (IVPP) of the Chinese Academy of Sciences and Shandong Tianyu Museum of Nature extracted and decalcified femur cartilage from a 125-million-year-old Caudipteryx dinosaur, which lived in the Jehol Biota—in what is now the coastal province of Liaoning in northeast China—during the Early Cretaceous period.

According to a news release from the Chinese Academy of Sciences, the femur cells contained preserved nuclei and chromatin fragments that could potentially hold preserved dinosaur DNA. The scientists discovered this by staining the extracted cells with hematoxylin, a chemical that binds to cell nuclei. The team also compared the Caudipteryx cartilage staining to that of a chicken cartilage sample, noting the fossil's staining resembled the chicken's visible nuclei and chromatin material. IVPP’s Li Zhiheng, a coauthor on the paper, explains in the statement that “Fossil preservation in the Jehol Biota was exceptional due to fine volcanic ashes that entombed the carcasses and preserved them down to the cellular level.” The research paper suggests that nuclear cell components are preserved particularly effectively in fossilized cartilage tissue compared to other tissue types. 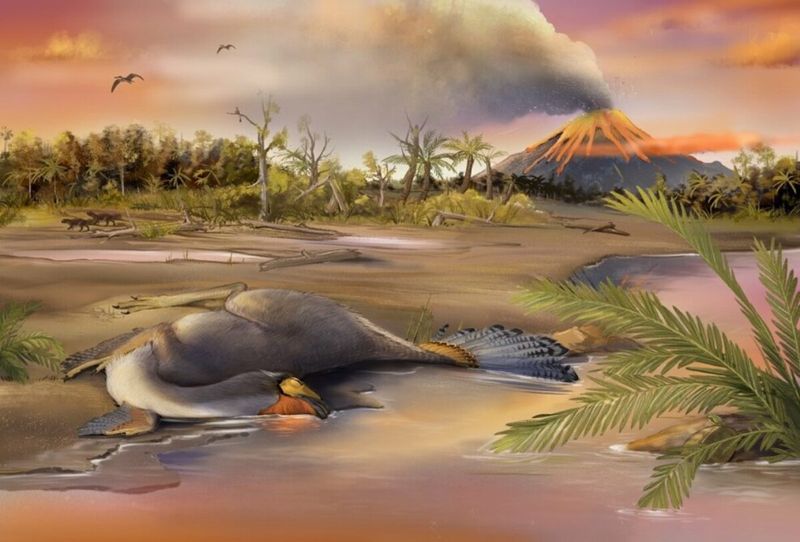 However, Evan Saitta, a researcher from Chicago’s Field Museum of Natural History, tells Gizmodo that microbes on fossils could be mistaken for genetic material from the dinosaurs themselves.

Paleogeneticist Love Dalén from the Centre for Palaeogenetics in Sweden was part of the team that extracted million-year-old mammoth DNA. He calls the notion of DNA enduring in dinosaur remains almost “impossible,” adding in an email to Gizmodo, “We know from both massive empirical studies and theoretical models that even under completely frozen conditions, DNA molecules will not survive more than ca 3 million years.”

University College London biochemist Sergio Bertazzo, who also was not involved in the new study, tells Chemistry World that more analysis is needed to support the conclusions of the research; specifically, he says, “They need to use other chemical/biochemical techniques, [such] as mass spectrometry or any other method that can confirm the chemical identity of what they are staining.”

The research team also acknowledges the necessary work ahead to accurately identify the biomolecules from the Caudipteryx femur. Chinese Academy of Sciences paleontologist and coauthor Alida Bailleul tells Chemistry World, “These dinosaur nuclei are staining like normal cells, but does it mean there’s DNA inside them? Not really.” She calls staining “a good start” but “not precise enough to indicate whether certain compounds are present.” In the news release, Bailleul further points out that “We have good preliminary data, very exciting data, but we are just starting to understand cellular biochemistry in very old fossils. At this point, we need to work more.”

Correction (October 27): This article originally described the fossil as 125 years old rather than 125 million years old. The Scientist regrets the error.