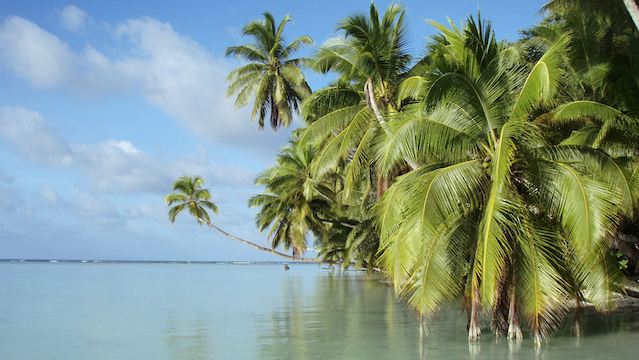 Palmyra AtollKEVIN LAFFERTYOne thousand miles south of Hawaii, the Palmyra Atoll, a horseshoe-shaped chain of islets, is about as isolated as you can imagine, says Erin Mordecai, a biologist at Stanford University who has visited the islets to conduct ecology research. “It’s really, really remote and has never had a native human population,” she says. Year-round, the population varies between approximately five and 30 people—generally, scientific researchers and Nature Conservancy staff.

But the atoll is far from unspoiled, Mordecai continues. “The most human impact it’s had was during World War II when there were about 2,400 troops.” Considering the brevity of the soldiers’ inhabitation, the repercussions were immense. “They built airstrips on some of the islands. There’s still metal and debris that they left behind.” They also brought rats and mosquitoes, neither of which is native to the atoll. There are in fact no native mammals...

With no predators and plenty of food, the rat population exploded. In 2011, it was estimated to have reached 40,000. “There’s not a lot of land . . . [so] they were everywhere,” says wildlife refuge manager Stefan Kropidlowski of the US Fish and Wildlife Service in Honolulu who oversees research visits to the atoll. Kropidlowski had not visited Palymra before the eradication, but “by all accounts,” he says, “if you walked though the jungle, they were in the trees, they were jumping up around you, they were crawling through the cabin screens at night, and it was a huge hassle to store food.”

From a conservation perspective, Kropidlowski says, “the rats were predating a lot of the seabirds and probably resulted in the extirpation of a number of ground-nesting [species].” So, when the atoll became a National Wildlife Refuge in the early 2000s, he says, “rat eradication was one of the major conservation priorities . . . to give the seabirds a chance to start coming back.” 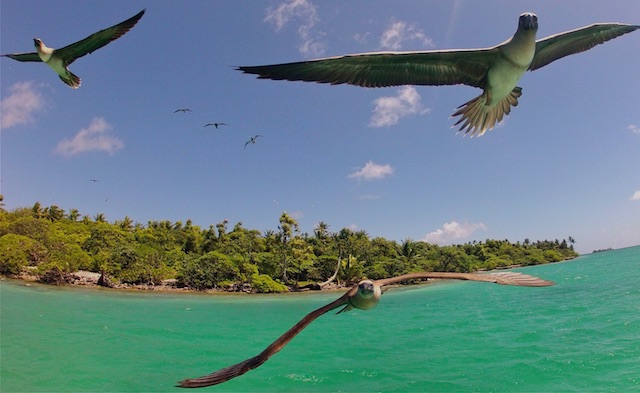 A 2011 atoll-wide rat-poisoning endeavor successfully eliminated the rodents, and, in the following years, conservation researchers documented the effects to the native wildlife. Among these scientists was Kevin Lafferty of the US Geological Survey and the University of California, Santa Barbara, who led the research. “We were looking at how the food web was changing after rat removal,” he explains.

But of course, “we were part of the food web,” says Lafferty. “Getting bitten by mosquitoes is the price you pay for working in paradise.” Therefore, after the rodent eradication, it became “just obvious that we weren’t being bitten [during the day] anymore.”

As Lafferty and his colleagues report in Biology Letters today (February 28), not a single Asian tiger mosquito (Aedes albopictus) has been found on Palmyra Atoll during a recent two-year survey. This unanticipated secondary extinction serves as a reminder of the interdependency and fragility of species within ecosystems.

“This is an interesting paper that opens up the fascinating possibility that eradicating one human-introduced pest, which would be the rats, could lead to the secondary elimination of another human-introduced pest, A. albopictus,” says entomologist Megan Fritz of the University of Maryland who was not involved with the study. “The findings have implications for conservation biology and habitat restoration and possibly even human health in sparsely populated tropical island communities.”

Indeed, “this study highlights an often under-sung impact of invasive species—disease vectoring,” Alex Wegmann, the Palmyra program director at the Nature Conservancy in Honolulu who was not involved with the study, writes in an email to The Scientist. “Rats do not carry yellow fever, but, in this case, they allowed the pathogen’s primary vector to persist at Palmyra for decades.”

A. albopictus, one of the two mosquito species on the atoll, bites during the day and feeds preferentially on mammals, but can also bite birds. The other, Culex quinquefasciatus, bites at night and feeds preferentially on birds, but can also bite mammals. Without the rats, it was thought that A. albopictus might bite birds and humans more often. “We hadn’t predicted that the mosquitoes would [die out],” Lafferty says.

After the rat eradication, researchers started noting how pleasant their trips had been, says Lafferty. Kropidlowski recalls his first visit to the atoll, a few years after the rodents were wiped out. “I had been told to expect lots of mosquitoes,” he says “but there were none.” He remembers noticing old bottles of insect repellent, gathering dust, unfinished.

The idea arose that perhaps the mosquitoes might have starved to death. “Normally, you come up with an idea like that and it just remains an idea,” Lafferty says. But, as luck would have it, Lafferty’s colleague at the University of California, Santa Barbara, and coauthor on the study, Hillary Young, had data on flying insects, including mosquitoes, that predated the rat eradication.

“It was very serendipitous and not planned or expected,” says Lafferty.

Because the researchers would still occasionally be bitten at night, the question was, had the daytime-biting, mammal-preferring A. albopictus really been wiped out? Lafferty’s team went to great lengths to try to capture members of the species—setting two different types of trap—before concluding that, yes, by the standards set by the World Health Organization (two years of sensitive surveillance without detection), A. albopictus was indeed gone.

It was clear the mosquitoes hadn’t switched to feeding more often on birds and humans, at least not in sufficient numbers to support the population. And there was another factor that the authors speculate may have contributed to the mosquitoes’ demise. Without the rats, there were far fewer freshwater receptacles in which mosquito larvae could hatch. The rodents would gnaw coconut shells in half, to eat the innards, and leave them littered about the islets, catching rainwater.

It would be nice to think that in areas with more people, such as cities, rat eradication might also eliminate mosquitoes, but this seems unlikely, says Fritz. “The modelling results from the paper suggest that larger human populations would likely be able to sustain A. albopictus populations.”

“I don’t think the main message of this paper is that we’ll be able to eradicate rats to get rid of mosquitoes,” agrees Lafferty. “The more important message is . . . the interdependence of species.”

If a species is driven to extinction, he says, “are we just going to lose that one species . . . or could we lose many? Even though we’re talking about two species we don’t like, here, it could just have easily been two species we did like. It could have been, for instance, an endangered flower and its pollinator.”