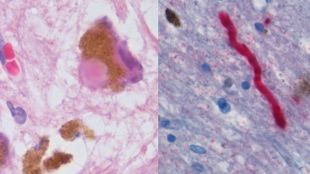 A former assistant professor at the University of Medicine and Dentistry, New Jersey (UMDNJ) committed research misconduct by fabricating data, according to an investigation by the university and the Department of Health and Human Services’ Office of Research Integrity (ORI). The ORI, which announced its findings on Thursday (June 28), determined that Mona Thiruchelvam falsified cell count data published in two papers in 2005 in Environmental Health Perspectives and Journal of Biological Chemistry, both of which she has agreed to retract.

Thiruchelvam fabricated stereological cell count data in two studies on how pesticides influence neuronal mechanisms involved in Parkinson’s disease (PD). The studies reported the results of 13 new experiments that supposedly counted nigrostriatal neurons in the brains of mice and rats, but an investigation spearheaded by the UMDNJ determined those counts were never taken. The nigrostriatal pathway is a...

The papers slated for retraction investigate the neurological response to the combined pesticides paraquat and maneb, and suggest the pesticide atrazine also has a role in disrupting dopamine pathways. The false data were used to create several summary bar graphs, which Thiruchelvam modified to support the hypothesis that proteasomal dysfunction is higher in males than females with PD, and that exposure to paraquat and maneb enhances this effect.

Gary Miller, who cited the Environmental Health Perspectives paper (which has been cited 36 times, according to ISI), said his lab has always been skeptical about the association between certain herbicides and Parkinson’s. “There is strong evidence of an association between pesticides and PD, but figuring out exactly which compounds are driving this has been difficult,” he told The Scientist by email. “I suspect some laboratories have pursued studies based on these findings, which is unfortunate. The retraction of these papers doesn’t help the field.”

Deborah Cory-Slechta, a co-author on the same paper, said in an email she was “both shocked and disappointed” by the news. Both papers have had influence in the field, with the Journal of Biological Chemistry study being cited 73 times according to ISI.

A collaborator at UMDNJ first brought the matter to the attention of university research integrity officials a few years after Thiruchelvam joined the university in 2003, when he realized she was publishing cell density data without using his lab as she had done before. An initial inquiry was launched, for which Thiruchelvam provided the name of a researcher in California who she said had provided her with data. The witness, who Thiruchelvam said by that point had moved to England, was called and confirmed the story, but further investigation by UMDNJ revealed that this was a false witness. When investigators got a hold of the actual person Thiruchelvam had named, they learned she still resided in California and that she denied providing any data to Thiruchelvam.

In her defense, Thiruchelvam then produced 293 data files she said were the product of a confocal microscope system manufactured by the company Micro Bright Field (MBF). When UMDNJ investigators gave MBF the data to interpret, the company concluded that the files were corrupted and couldn’t be verified as real or false. However, when the case was passed to the ORI for oversight review, agents used forensic computing software to determine that many of the files, despite having different file names and dates, were identical in content.

This suggested to the ORI that the corruption had been intentional on the part of Thiruchelvam, and not due to damage by a computer virus. The identical files were then sent back to MBF for further analysis, which subsequently discovered that all of the files had come from one single file created in 2002 during one of Thiruchelvam’s previous investigations at the University of Rochester, before she joined UMDNJ.

After the investigation was passed back to UMDNJ and the findings were confirmed, Thiruchelvam was notified and provided with an opportunity to respond. She never did, and in February 2010, she left the UMDNJ. The ORI sent her a Voluntary Exclusion Agreement, which excludes her from federal funding and serving on advisory committees for seven years, which she signed without comment.

Thiruchelvam could not be reached for comment by The Scientist. Judith Neubauer, Associate Vice President for Research and Regulatory Affairs at UMDNJ, said in an email that the university expects the highest standards from its community, and “this breach of this trust by Dr. Thiruchelvam is a great disappointment to us.” She added that the issue resulted in “collateral damage to collaborators, trainees, and the scientific community as a whole, and threatens to undermine the public trust in all the excellent work being done at our University. Rest assured that we view this violation very seriously and believe that appropriate action has been taken.”

Correction (July 6, 2012): This story has been updated from its original version to correctly reflect that the Environmental Health Perspectives and Journal of Biological Chemistry papers were published in 2005, not 2009. The Scientist regrets the error.