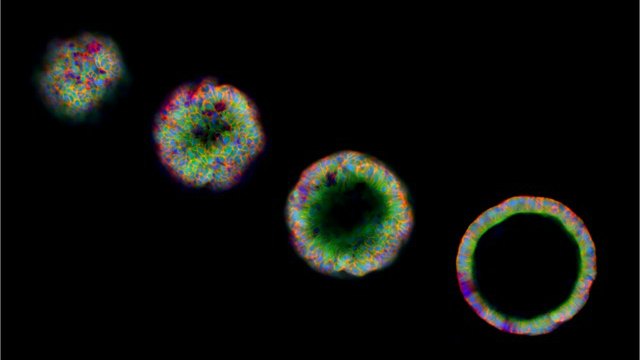 Hollow iPL colonyLILY GUOThe promise of cell-based therapy is limited by the challenge of generating large enough numbers of the correct type of cells. But a strategy called interrupted reprogramming could help overcome this limitation. In study published today (November 30) in Stem Cell Reports, researchers in Canada subjected mouse lung cells to reprogramming factors for short periods of time, which nudged the cells toward a multipotent, progenitor-like state capable of dividing exponentially to give rise to large numbers of cells, but stopped short of pluripotency.

Coauthor Thomas Waddell, a thoracic surgeon and researcher at the University of Toronto, explains that in the past, researchers have focused on the final product of cellular reprogramming, the induced pluripotent stem cell (iPSC), but that the process of generating iPSCs can be time-consuming and expensive. “We’re interested in the idea that reprogramming could become something other than the...

Waddell and colleagues isolated club cells—a population of both terminally differentiated and variant cells, which proliferate in response to injury—from the lungs of adult mice. They sorted the cells to collect those that appeared to contain only mature club cells that did not proliferate extensively in vitro.

Transgenes in the mice allowed the researchers to administer doxycycline to activate the four genes commonly used to generate iPSCs. Cells treated with the drug proliferated exponentially and formed colonies, while untreated cells did not form colonies.

The authors determined that to make multipotent cells, rather than full iPSCs, the ideal duration of doxycycline exposure was three weeks. This time period generated induced progenitor-like (iPL) cells that expanded quickly and had the ability to form colonies, but did not lead to more pluripotent cells induced by longer treatments. The cells increased exponentially in number by about 30 fold, in contrast to methods of generating iPSCs, which often have low yields. 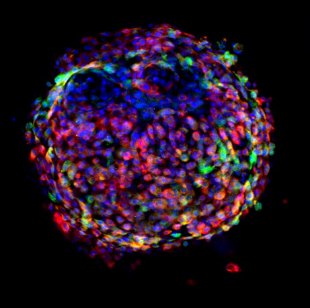 Mature Club cells derived from iPL cells LILY GUOThese iPL cells were more likely to develop into different types of lung cells than cells treated with the drug for longer periods. And when they removed doxycycline, the iPL cells reverted back to a club-cell phenotype, suggesting that they maintain their lineage commitment. The cells were also capable of replacing lung cells in a mouse model of cystic fibrosis, and did not cause teratomas.

The work is “innovative and could be of interest for cell therapies for lung disease. For people in the lung field it will be very exciting,” says Bernard Thebaud, a physician and researcher at the Ottawa Hospital Research Institute in Canada who did not participate in the study. “The concept could also be applied to cells outside of the lung,” he adds.

“We do think it’s applicable to other cell types,” agrees Waddell, whose team is already testing the technique in other lung cells. Their collaborators are also exploring the utility of the strategy in the pancreas.

“The question for me is, does this partial reprogramming that they’ve subjected the cells to really add any reasonable benefit to what the cells are capable of doing at baseline in the proper conditions?” says Andrew Vaughan, who studies lung stem and progenitor cells at the University of Pennsylvania School of Veterinary Medicine and did not participate in the work. Because club cells have endogenous proliferative capacity and other groups have had success growing them in vitro, he explains, it is not clear to what degree interrupted reprogramming represents an advance.

Vaughan says that there is a need for strategies that will allow for the generation of large numbers of cells and maintenance of those cells for long periods of time in culture, especially when starting with human cells. “If partial reprogramming were to allow us to . . . expand the cells indefinitely, especially if they were derived from the patients themselves, then you’d be looking at a real step forward in potential cell-based therapy applications,” he says.