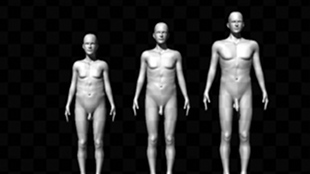 Researchers asked women to judge computer-generated images of men.MAUTZ ET AL., FIG. 1Women rate images of men more highly the larger their penises are, according to a study published yesterday (April 8) in the Proceedings of the National Academy of Sciences. Penis size had about the same influence as height in determining how females rated the attractiveness of males. Body shape was also influential in determining hotness—men with broad shoulders and narrow hips faired best.

Researchers had 105 heterosexual female Australian women rate life-size computer-generated images of men of various heights, builds, and penis sizes. They found that, at rather short lengths, adding inches to penis size was hugely helpful, but the benefit per added inch began to diminish when penises reached around 3 inches long when flaccid. The researchers, from three Australian universities, predicted that there would be a size at which penises became too big...

The scientists said that women’s apparent interest in penis size could explain why human males have penises that are larger in proportion to body size than the penises of other animals. Since penises would have been readily visible for much of human evolution, ancestral women could have selected for large penises through sizing up partners before copulating.

The preference could have several explanations, the authors speculated. A previous study showed that larger penises were associated with more orgasms in female sex partners. A predilection for large penises could also be a social or cultural phenomenon. Alan Dixson, a primatologist at the Victoria University of Wellington in New Zealand, told Nature that in order to understand the cultural component, the researchers should study how women from various areas and cultures value penis size.