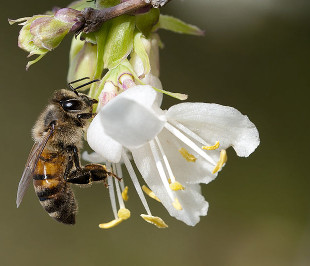 WIKIMEDIA, ZEYNEL CEBECIExposure to neonicotinoids, a type of pesticide widely used on crops, reduced the percentage of viable sperm in male honeybees (drones) and also shortened the insects’ lifespans, according to a study published today (July 27) in Proceedings of the Royal Society B.

“Exposure to common pesticides leads to a decline in sperm quality in honeybees, even when the dose of pesticide provided is so small that it has no effect on growth and development,” Peter Dearden, a geneticist and bee researcher at New Zealand’s University of Otago who was not involved in the work, wrote in an email to The Scientist. The levels of pesticides used in these experiments were equivalent to those bees might encounter in a neonicotinoid-treated field. But even a small adverse effect from a low pesticide dose can have serious ramifications, said Dearden. “Because bee society relies on each caste...

Neonicotinoids are one of many possible factors that scientists believe may contribute to recent bee population declines and colony losses. That hypothesized link—and whether it warrants banning of these pesticides—has been the subject of controversy, particularly in the U.K. Researchers have already linked neonicotinoids to a variety of honeybee ailments. For instance, honeybees exposed to neonicotinoids show impaired homing instincts. One study found that queens exposed to the pesticides had enlarged ovaries and fewer stored sperm of lower viability compared with those not exposed to the pesticides.

The present study is the first to examine the effects of neonicotinoids on male honeybees, said study coauthor Lars Straub of the University of Bern in Switzerland.

The researchers raised 20 honeybee colonies, each including one already-mated queen, and fed half of the colonies a pollen-sugar-honey paste laced with two different neonicotinoids. The control colonies were fed this same pollen paste minus the pesticides. They next induced each queen to lay both unfertilized eggs (which produce male drones) or fertilized eggs (which produce female workers that care for the developing drones). As the drones matured, the male bees continued to eat pollen with or without pesticides depending on their experimental group.

Drones fed the neonicotinoid-containing pollen paste produced as many sperm as controls, but 8 percent fewer of those cells were viable, Straub and colleagues reported. Male bees exposed to neonicotinoids also had shorter lifespans than controls, which could reduce their chances of living long enough to mate with a queen, the researchers wrote in their paper.

The queens in this study had already mated at the start of the experiment, so they did not experience the effects of drones’ reduced reproductive capacity. In the wild and in managed honeybee colonies, however, reduced sperm viability in male drones might also affect queen bees’ health and reproduction, Straub said.

Early in her life, each virgin queen goes on a mating flight during which she copulates with many different males, Straub explained, collecting sperm from each one. These sperm swim from the queen’s oviduct, where they land after mating, into the sperm storage organ, the spermatheca. A few days after mating, the queen detects whether she has enough viable sperm in her spermatheca. If not, she may go out to mate again.

If the queen mates with males of reduced sperm viability, fewer sperm make it to her spermatheca. That sperm scarcity may necessitate more mating flights, Straub predicted, and with each flight comes a risk of losing the queen.

“All these flights that she has to take upon herself [are] like a risk not only to herself but obviously also to the colony,” Straub said, as queen loss can lead to colony loss.

Reduced sperm viability is just one of many possible negative effects of neonicotinoids, agreed University of Maryland bee researcher Dennis vanEngelsdorp, who also was not involved in the work. “We’re not likely to find one smoking gun,” he said.

VanEngelsdorp added that he wondered whether the pesticides have similar effects on other types of bees.

“We might expect other drones of other bee species to respond the same way,” said US Department of Agriculture bee researcher Jeffery Pettis. “But we don’t know that yet.”