ABOVE: A lymph node with B cells labeled yellow and CD4+ T cells in blue.
FLICKR, NIAID

Just like any skilled workers, many antibody-producing cells require training to do their job proficiently. That education happens in germinal centers, structures in the lymph nodes that form upon infection or vaccination, then disappear after a few weeks. Although our bodies have some antibody-spewing plasmablasts at the ready when they first encounter a new virus, better, longer-lasting antibody-making cells emerge from these lymphoid boot camps.

In what’s described as the dark zone of the germinal center based on its appearance under a microscope, B cells swiftly multiply and diversify into clones that carry differently shaped antibodies. They then drift into the “light zone,” where they face examination by specialized T cells that test their ability to recognize viral protein. This test is tough; imperfect clones are sent back to the dark zone for refinement or are eliminated. The result of this natural section on fast track is a number of winning clones that stick very tightly to viral protein and are immortalized into long-lived memory B cells and plasma cells, which provide antibody protection for years or even decades. This schooling in germinal centers is crucial to developing lasting immunity, whether by natural infection or vaccines.

A preprint posted to Research Square on March 10 shows that a dozen people who received the Pfizer/BioNTech mRNA vaccine produced potent germinal center responses—the first demonstration that an mRNA vaccine triggers the formation of these key structures in people. Although there was no reason to suspect that the Pfizer vaccine wouldn’t induce germinal centers, proof has so far been elusive. The research provides reassurance that vaccinees will likely have long-lived antibody immunity to SARS-CoV-2.

This is what the vaccine is meant to do.

“I was hoping this response would be there . . . so I was very excited,” remarks immune engineer Ankur Singh of Georgia Tech, who recently got his first dose of the Pfizer vaccine and who wasn’t involved in the research. “I think this is quite an interesting finding [that] a lipid particle–based mRNA vaccine is so nicely inducing these responses, because it has never been shown up until now that it was even a possibility.”

Feeling limited in studying the human immune response just by looking at blood samples, immunologist Ali Ellebedy of Washington University School of Medicine in St. Louis and colleagues began tracking germinal center reactions a few years ago. Guided by ultrasound, they used fine needles to extract cells from the lymph nodes of people who had received a seasonal influenza vaccine with the viral protein hemagglutinin. In that study, they found hemagglutinin-binding germinal center B cells amassing in some participants, sometimes for up to nine weeks after vaccination. When the new COVID-19 vaccines rolled out, the team was ready to investigate whether they would have the same effect. (Ellebedy and some coauthors disclosed various relationships with pharmaceutical companies, including active collaborations with Pfizer, a position on the scientific advisory board of Moderna, and having received funding from both pharma companies. The Washington University School of Medicine has filed a patent application related to the new research.)

The team tracked 32 healthy adults as they received both jabs of the Pfizer vaccine, three weeks apart, into their upper arm muscle. The participants’ blood samples revealed—as expected—a short-lived plasmablast response that peaked a week after the second shot and began declining three weeks later. That was accompanied by a flush of antibodies that were effective in neutralizing a SARS-CoV-2 variant in the US, the B.1.1.7 variant first identified in the UK, and a SARS-CoV-2 virus engineered to mimic the spike protein of the B.1.315 variant discovered in South Africa. Notably, neutralizing antibody concentrations were generally higher in a subset of vaccine recipients who had been previously infected with the real virus, suggesting they have a higher degree of protection.

To see if the usual plasmablast wave was followed by a germinal center response, the team extracted cells from participants’ armpit lymph nodes at multiple timepoints and used flow cytometry to quantify the proportion of germinal center–resident B cells there, which carry specific cell markers. Fluorescently labeled probes were used to isolate cells that target SARS-CoV-2’s spike protein, which is produced by the mRNA vaccine. 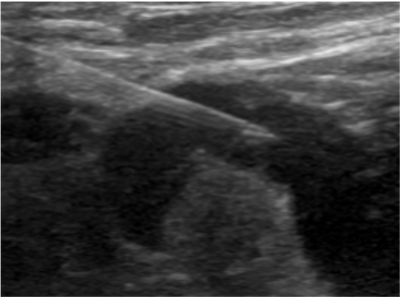 An ultrasound image of a person’s armpit lymph node after being vaccinated with the Pfizer mRNA vaccine. The dark area represents the cortex region of the lymph node, where germinal centers form to generate long-lived antibody responses.
Sharlene Teefey from Washington University Radiology

Sure enough, the researchers observed spike-binding germinal center B cells in all participants three weeks after the first jab. The proportion of these cells increased after the second shot and stayed at high levels in most participants for at least seven weeks—a good sign that memory B cells and plasma cells are being generated. The longer germinal center reactions go on, the more rigorous training antibody-producing cells are getting. “You get higher affinity B cells, but you get also more B cells differentiating into the memory B cells and [a] long-lived plasma cell pool,” he says. “This is what the vaccine is meant to do.”

With the mRNA vaccine, “in every node we looked at, we found very nice, beautiful germinal center responses specific to the spike,” Ellebedy says. He suspects that the difference may have to do with the fact that the seasonal influenza vaccine they investigated doesn’t contain efficacy-boosting compounds known as adjuvants. Instead, the vaccine essentially only consists of a piece of protein, selected for inducing a strong immune response, and relies heavily on the fact that many people already have pre-existing immunity to influenza in order to produce protection. The SARS-CoV-2 mRNA vaccine, in contrast, contains adjuvants, and mRNA itself can elicit immune reactions and is potentially translated into larger quantities of protein than those contained in the flu vaccine, Ellebedy hypothesizes.

To immunologist Ziv Shulman of the Weizmann Institute of Science in Israel, the team’s data are a good sign that the vaccine is having its intended effect in people. What he finds surprising, he says, is the additional discovery of an unexpected type of spike-targeting plasmablast in the recipients’ lymph nodes. In this study, while most plasmablasts produced IgG antibodies—which circulate in the blood—a substantial portion made IgA antibodies, which are normally produced in infected mucosal tissues, such as in the gut or nose.

It’s entirely unexpected to see IgA antibodies produced after a vaccine is injected into muscle tissue in the body’s periphery—he’d only expect that for vaccines that are administered through mucosal tissues, such as the mouth or nose, says Shulman, who was not involved in the study. But their presence is a good thing. Most likely they will migrate into mucosal tissues and provide protection there—which IgG antibodies are also capable of doing, but not as efficiently. “[The IgAs] could block entry of the virus at the site where it goes into our body,” says Shulman. The exact source of those IgA-expressing plasmablasts—for instance, whether they originate from germinal center reactions induced by the vaccine or from reawakened memory immune cells from previous common cold–causing coronavirus infections—is unclear, he notes.

The findings contrast with an autopsy analysis published last year that reported that some severely infected COVID-19 patients don’t develop germinal centers, causing some concern among researchers that this would portend poor vaccine efficacy. Singh notes that immune memory from SARS-CoV-2 infection can be very variable. “There’s more consistency in vaccine-mediated immunity. “I would rather get [immunity] this way than going through the infectious way.”

Both researchers praise the team’s method of examining ongoing germinal center reactions in living individuals. “This is really not a simple procedure to do on healthy people,” Shulman adds. Of course, questions remain, such as how long the germinal center reactions last beyond seven weeks, and whether these reactions do in fact produce long-lived plasma B cells. Those cells migrate to the bone marrow and persist there for decades, secreting antibodies continuously into the bloodstream like a barrage of missiles. “A lingering question is, are we going to get [the vaccine] every year like a flu shot, or are we going to generate a long-term response?” Singh asks.

A week after the second shot, Ellebedy’s team took a closer look at the antibodies produced by some of the spike-targeting germinal center B cells. Interestingly, a few also reacted with the spike proteins of other, common cold–causing coronaviruses. Not only did the vaccine likely create new cells, but it apparently also re-enlisted veteran memory B cells from previous infections back into germinal center training.

The finding could help guide scientists toward an antibody that can neutralize all coronaviruses, and a vaccine that protects against all of them, Ellebedy notes. “That would be a great antibody to find.”