Leder was revered for his work in molecular biology, immunology, and cancer genetics. His first scientific breakthrough came in the 1960s when he was working as a postdoc in geneticist Marshall Nirenberg’s lab at the National Institutes of Health (NIH). Together they developed a technique that confirmed that amino acids were encoded by a sequence of three nucleotides and revealed the triplet code of ambiguous amino acids.

From there, Leder went on to determine the first complete sequence of a mammalian gene, develop the first recombinant DNA vector system safe for use in the lab, identify the structure of genes that encode antibody molecules, discover a gene that caused cancer, and develop the first mouse model of cancer.

“Phil Leder was special. Among great scientists, he was special, and among scientists, he was an icon,” David Livingston, a geneticist at Harvard who worked in Leder’s lab at NIH, tells The Scientist. “He was gifted. He was generous. He was a splendid person to listen to talk, to run experiments by, and be criticized by. He was a splendid human being on top of all of it.”

He had an immensely adventurous mind. No problem was beyond at least discussion.

Leder was born on November 19, 1934 in Washington, DC, and grew up there. He attended Western High School, graduated in 1952, and went on to study at Harvard University. He interned at NIH as an undergraduate, working in biochemist Martha Vaughan’s lab in the National Heart Institute, which is now the National Heart, Lung, and Blood Institute. He finished his bachelor’s degree at Harvard in 1956 and stayed there for medical school, graduating in 1960.

After a two-year residency program at the University of Minnesota Hospitals, he returned to NIH to work with Nirenberg. Leder dove headfirst into the race to decipher the way genes encode proteins and helped to design a filtering instrument to rapidly test 45 amino acid samples simultaneously, instead of one at a time. Leder and Nirenberg could quickly tag amino acids with a radioactive label, bind them to triplet RNA sequences, and put them into the filtering instrument, which helped the team decode unknown amino acid codon sequences, well before other scientists could, according to a remembrance on Leder posted by NIH.

It was one of the most exciting times in Leder’s life, he said. “I would go to bed thinking about the next day’s experiments and then jump out of bed in the morning and rush to the laboratory,” he recalled in a 2012 interview with American Society for Biochemistry and Molecular Biology Today. “I stayed late at night. It was a lot of work, but the intellectual excitement was enormous.” The two published their work on the codons in 1964.

In 1965, Leder joined the Weizmann Institute in Rehovot, Israel, as a visiting scientist and stayed until 1966. He returned to the NIH, serving as a research medical officer in the National Cancer Institute from 1966 to 1969 and then became head of the Section on Molecular Genetics in the Laboratory of Molecular Genetics in the National Institute of Child Health and Human Development and in 1972 was promoted to the director of the lab. 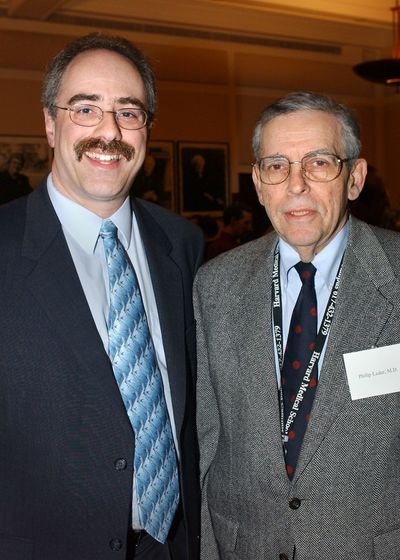 During this time and through the 1970s, he and his colleagues worked on deciphering the genetic sequence of alpha globin, a component of hemoglobin, a protein in red blood cells that carries oxygen to the body’s cells and tissues. His work also revealed important details about the genetics of encoding antibodies and that the synthesis of antibodies was not only regulated by genetics but also biochemical processes that ensure specificity to target the right antigen presented by viruses, bacteria, or other invaders in the body.

What made Leder such an outstanding scientist, Livingston explains, was his immense rigor. Control experiments, for example, had to be “at least as incisive or demanding and rigorous as the actual experiments . . . to prove that nothing in the discovery experiment was an artifact,” he says. “And he had an immensely adventurous mind. No problem was beyond at least discussion,” which made Leder unique as a mentor. “In fact, his ability to mentor was internationally celebrated,” Livingston explains. “You could listen to his talks, and you knew he was a fantastic teacher because his mind was utterly clear.”

Leder joined Harvard Medical School (HMS) in 1980, founding its genetics department in 1981 and chairing the department for 25 years. His research there led to the discovery of a specific gene, MYC. With Harvard colleague Timothy Stewart, Leder began using a fine glass needle to insert the cancer-causing gene into mouse embryos just after fertilization, thereby creating OncoMouse, a genetic line of mice that were prone to developing the disease. The duo patented the animal in 1988, giving researchers an unprecedented tool to study cancer and how to treat it.

His work at Harvard was not limited to his research. He made fundamental changes to hiring, instituting nationwide searches for new assistant professors in the genetics department, which increased the likelihood of hiring women, notes Jonathan Seidman, a geneticist at Harvard who worked in Leder’s lab at NIH in the 1970s. Leder also made sure the department didn’t get too big, Seidman says, and he insisted that if faculty were on different floors, spiral staircases—rather than drab stairwells—would connect them, making it easy for researchers to communicate and collaborate.

Leder’s “contributions to science and to HMS cannot be overstated, and he will never be forgotten,” George Daley, Harvard’s dean of the faculty of medicine wrote to colleagues on February 4.

For his work, Leder was honored with the Albert Lasker Award for Basic Medical Research, the US National Medal of Science, the Heineken Prize from the Royal Netherlands Academy of Arts of Sciences, and the William Allan Medal from the American Society of Human Genetics. He was a member of the National Academy of Sciences, a Fellow of the American Association for the Advancement of Science, and a Howard Hughes Medical Institute investigator.

Surviving him are his wife, Aya Leder, his children, Micki, Tani, and Ben, his daughters-in-law, Karen Leder and Mary Leder, and his grandchildren, Jacob, David, Sarah, Eli, Alex, Matt, Amanda, and Annie.