Picozoans have puzzled scientists ever since their surprising discovery almost 15 years ago. These common, globally distributed microbes are barely bigger than bacteria, yet they’re members of the same domain as animals, fungi, and plants, and everything from what they eat to where they fit into the eukaryotic tree of life has proven difficult to pin down.

Now, a preprint uploaded to bioRxiv on April 14 claims to have found these perplexing microbes an evolutionary home. But the paper, which is currently undergoing peer review, suggests picozoans aren’t done surprising scientists. If the authors’ conclusions are right, then these microbes are indeed algae, even though they seem to lack the group’s most notable feature: plastids, a group of organelles that includes chloroplasts.

The 2007 Science paper that announced the discovery of this group of plankton rocked the field of microbial ecology. “I still remember exactly where I was when I read the first description of these organisms,” says Fabien Burki, a molecular protistologist at Uppsala University in Sweden and the senior author on the recent preprint. At the time, he was a PhD student working on resolving the overall structure of the eukaryotic tree of life. All of a sudden, there was an entirely new and strange branch to consider.

Initially, the authors of the 2007 study, led by Linda Medlin of the Alfred Wegener Institute for Polar and Marine Research, called the organisms picobiliphytes because they appeared to be small algae that photosynthesized using phycobilin pigments, much like some red algae do. A previously undocumented alga in itself was surprising, given that algae are arguably the most well-studied planktonic group, says Burki; their colors have made them popular research subjects for hundreds of years. No one thought that there were major lineages of algae awaiting discovery in the 21st century, he says. Yet, there these organisms were—overlooked because they slipped right through the three-micron filters often used to separate larger eukaryotic microbes such as algae and zooplankton from bacteria.

Once they knew what to look for, researchers detected these microbes in water samples from disparate locations and in both surface and deep ocean waters, suggesting they’re everywhere.

In 2011, Michael Sieracki, a microbial oceanographer who at the time was at the Bigelow Laboratory for Ocean Sciences in Maine, and his colleagues found that ribosomal gene sequences didn’t conclusively place picozoans with other algae, and single-cell genomics couldn’t detect photosynthetic genes. Confirming the idea that the microbes are heterotrophs, a transient culture of one species by Medlin’s team in 2013 allowed for detailed microscopy, which conclusively showed these plankton are consumers that don’t contain chloroplasts or plastids of any kind. So the term Picozoa—pico for their small size and zoa for their animal-like lifestyle of eating other organisms—was proposed and adopted. What they eat is still under investigation, though a 2020 Frontiers in Microbiology study by Sieracki and colleagues suggests viruses may encompass a large portion of their diet.

Still, the “phytes” suffix denoting planthood might actually be more appropriate, as Burki’s genomic data suggest they’re a sister group to red algae—and smack dab in the middle of the Archaeplastida, the taxonomic “supergroup” of algae and plants.

Piecing together the picozoan puzzle 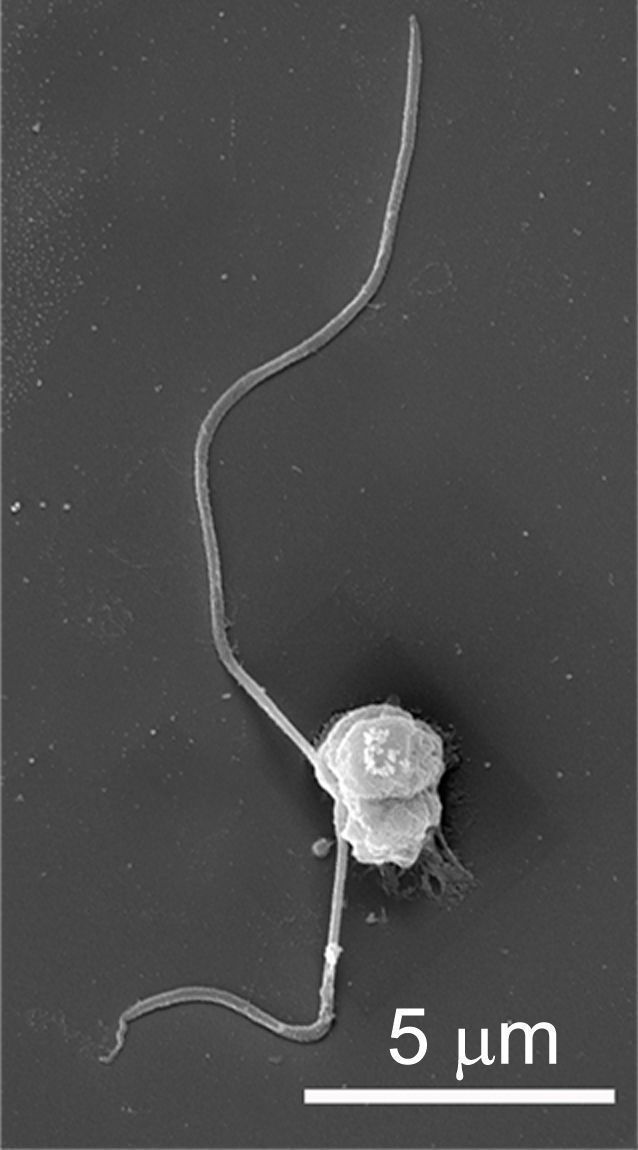 There aren’t any high-quality genome sequences for picozoans. Because no long-term cultures of the organisms have been established, it’s been basically impossible to obtain the volume of pure cells needed for in-depth sequencing, says Burki. So, he and his colleagues turned to single-cell genomics, obtaining 11 genomes from single cells and six genomes stitched together from multiple cells. When they compared these with established algal and microbial eukaryotic genomes, the Picozoa clearly grouped with the archaeplastids. In fact, according to the phylogenetic analyses, they branched off from their algal relatives shortly after the ancestor of all glaucocystid algae (Glaucophyta; a group of unicellular freshwater algae) and green algae and land plants (Chloroplastida) did.

Karolina Fučíková, a phycologist at Assumption University in Massachusetts, tells The Scientist the group’s phylogenomic analyses are “robust” and “sophisticated,” but that she wouldn’t be surprised if future analyses end up disagreeing with the placement. The clade branches are well supported, she notes, but small, ancient, tiny branches are always subject to a degree of uncertainty. “Every phylogeny is a hypothesis, and so I think in the future that the hypothesis may be supported by additional data, or it changes.”

Sieracki, now a program officer at the National Science Foundation, also finds the paper impressive. “It really helps put [the picozoa] in context,” he says. And even though it somewhat disagrees with the evolutionary relationships proposed by his earlier work, he isn’t terribly surprised by the nonphotosynthetic group’s placement inside the Archaeplastida. Algae and other single-celled eukaryotes have had billions of years to evolve and tinker with survival strategies, he notes, and “the whole idea of plant versus animal is a false construct that we put on these organisms.”

See “Mixing it Up in the Web of Life”

In addition to the phylogenomic analyses, Burki’s group combed through the genomes for any evidence that picozoans had ever had plastids, but found none. Even though that lines up with earlier studies, it’s still a bit surprising, says Burki, because it’s unprecedented. “Once you have this organelle, it’s actually extremely difficult to lose it,” he says.

Although plastids are most well known for their role in photosynthesis, they are involved in other essential metabolic processes. They make isoprenoids, for example, which form the basis for many pigments, vitamins, hormones, and key membrane molecules. Some of these are considered essential nutrients that organisms without plastids get by consuming organisms with plastids. The few archaeplastid groups that lack them are parasites that are able to make up for the loss by stealing from their hosts.

Picozoans appear to be the only free-living lineage of Archaeplastida to have ditched these organelles, according to Burki.

I still remember exactly where I was when I read the first description of these organisms.

Fučíková isn’t quite convinced the plastids or their remnants aren’t there; she’d feel more confident if there were more data from cultures of the organisms. “Not having a culture, it does limit what you can do, and to what extent you can study these critters,” she notes. She adds that she also wouldn’t be shocked if they truly did lose them. She points out that scientists don’t really know a lot about the ecology of the organisms that lived more than 1 billion years ago; these organelles may not have been quite so essential to the earliest plastid-bearing organisms.

There is also another, perhaps more controversial option: that picozoans never had plastids in the first place.

Much like mitochondria, plastids arose through endosymbiosis. “The widespread, accepted hypothesis, or paradigm, really, is that this was a single event,” says Burki. “One population of eukaryotes engaged into this relationship with a population of bacterium, and that was it.”

If there truly is no trace of plastids in picozoans, then either they did away with every last vestige, or they never had them. And if they never had them, then their common ancestor with red algae didn’t have them, either—which would mean that plastids must have originated separately in at least two algal groups—red algae and all other algae and plants.

Based on everything he’s seen, Burki says he leans toward total plastid loss, despite that being what he describes as “an extremely unlikely event.” The alternative, he adds, “would be a lot more exciting,” and new discoveries could tip the balance of evidence that way. Scientists have barely begun to sequence the diversity of microbial eukaryotes in the world, he notes, and the ones that live in places such as lakes are especially understudied. If work on them were to reveal additional plastid-free algal lineages, that could strengthen the case for multiple plastid origins.

Fučíková says a dual-origin scenario isn’t impossible. “If there were two endosymbiotic events, but those endosymbionts came from very closely related cyanobacteria, would we even know? Would we even be able to tell?”