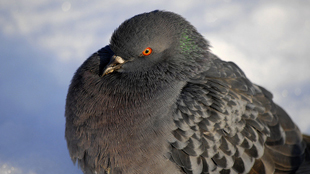 Pigeons, sea turtles, spiny lobsters, and mole rats don’t need Google Maps or MapQuest to find their way home—they have built-in GPS. These animals and others rely on Earth’s magnetic field for orientation and navigation. But how their brains process magnetic information has been unclear.

Now, researchers have identified the neural source of magnetic sense in pigeons—single cells that encode three key positioning factors: the direction of a magnetic field, its intensity, and its polarity (north or south). The research, published today (April 26) in Science, is a first step toward understanding how animals, including humans, compute maps in their heads and could someday help clinicians treat individuals afflicted with spatial disorientation.

“The authors did a beautiful job” recording the neuronal activity, said Wolfgang Wiltschko of Goethe University in Frankfurt, the first scientist to demonstrate magnetic orientation in birds in the late 1960s, who was not...

Last year, J. David Dickman and Le-Qing Wu at Baylor College of Medicine in Texas found that four major areas of the brain become active when pigeons respond to magnetic field changes: the vestibular region of the brainstem, the dorsal thalamus, visual regions in the cortex, and the hippocampus, known to be the site of spatial memory. Behavioral observations suggest that birds’ visual, vestibular, and auditory systems are all involved in magnetoreception, “so you would expect exactly these parts of the brain to be activated,” said Wiltschko. “If I were to construct a magnetic compass, I’d use these systems.”

Next, Dickman and Wu delved deeper into the brain to record the responses of individual neurons in these regions. Using seven awake pigeons, they recorded from 329 neurons in the vestibular area of the brainstem, while exposing the birds to an artificial magnetic field created by an open metal cube wrapped in wires and connected to a generator. The birds were also in the dark, so that there was no chance that the magnetic sense was being activated by the visual system, as has been proposed in the past.

When Dickman and Wu varied the direction of the magnetic field, its intensity, or its polarity, they recorded significant responses from 53 of the neurons tested. Different neurons responded to magnetic fields from specific directions, firing more frequently the more intense the field. “For the first time, we were able to quantify [magnetoreceptive] brain cells,” said Dickman. “Each cell is tuned to a different direction of the magnetic field in space—each has a maximum and minimum direction that it likes.” The cells also responded to field intensities from 20 microtesla (µT) up to 70 to 120 µT, a range that spans the Earth’s geomagnetic field of 25 to 65 µT.

But even with the cells underlying magnetoreception identified in pigeons, another question looms: what part of the body receives the magnetic cues and transmits them to the neurons? “We’re going after the receptor next,” said Dickman.

Scientists have proposed the retina, nose, and inner ear as the site of a receptor in birds. From ablation studies in which he lesioned the inner ear, Dickman believes that is the site of the magnetoreceptor, but Wiltschko said behavioral studies point to the visual system. The visual center of the brain is very close to the vestibular center, where Dickman’s team identified the magnetoreceptive neurons, so it’s possible that both are involved, said Wiltschko. “I’m really looking forward to what’s happening in the field,” he said.