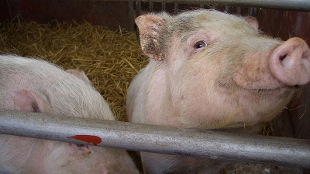 Wikimedia, titanium22The overwhelming smell of a hog farm is more than just an annoyance; it could have an impact on human health. According to a study published last week in Environmental Health Perspectives, the dust, allergens, ammonia, and hundreds of other volatile organic compounds that emanate from such farms can cause a notable rise in blood pressure in nearby residents, ScienceNOW reported.

Waste from industrial-scale livestock farms—specifically the unspeakable amounts of manure the animals produce—is already known to have an impact on human health: when sprayed over fields as fertilizer, manure-dwelling microbes can escape into the surrounding air, water, and soil and eventually make their way to cause infections in local residents. But recent evidence suggests that pathogens in pig poop aren’t the only risk that people living on or around farms face.

In 2009, researchers in North Carolina—a state that’s home to more hogs than people—showed...

Study participants sat outside their homes for 10 minutes, twice a day, noting the strength of the stench on a scale from 0 to 8. The researchers also measured concentrations of particulate matter and hydrogen sulfide. Finally, the participants were asked to take their own blood pressure using an automated reader. The results revealed that both higher hydrogen sulfide concentrations and strong odors was linked to higher blood pressure.

“I was impressed by the strength of the relationship” with self-reported odor, Steve Wing, an epidemiologist at the University of North Carolina, Chapel Hill, School of Public Health who led the study, told ScienceNOW. “Odor can be present without detectable hydrogen sulfide. It's made up of volatile organic compounds at very low concentrations and in a particular combination that people recognize as ‘swine.’”

Others think the results are less impressive. “The blood pressure rise was teeny tiny,” Susanna Von Essen, an internist at the Nebraska Medical Center in Omaha, told ScienceNOW. “I'm not sure this is alarming in and of itself—unless one can show repeated spikes lead to sustained hypertension or earlier onset of hypertension.”