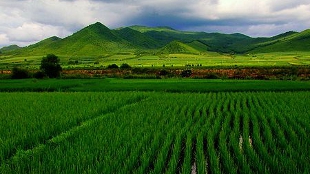 Paddy fields in the northeast of ChinaWIKIMEDIA COMMONS, CHARLIE FONG

When the news broke last September about a study identifying small RNAs from ingested plants in animals, the focus shifted unexpectedly and quickly to potential implications for genetically modified (GM) food safety. But some experts in the field of RNA interference (RNAi) feared that the GM-related concerns were misplaced, and that there were more fundamental issues with the research.

The research team, led by Chen-Yu Zhang of Nanjing University, China, reported finding small RNA molecules from ingested rice and other plants in the bloodstream of both mice and humans and in mice livers. One of these RNAs from rice, they found, could inhibit a mouse protein that usually aids in removal of LDL or “bad” cholesterol from the blood.

The controversy surrounding the results started even before publication. An editor at Science, for example, rejected the manuscript because...

But RNAi expert Phillip Zamore, investigator at the Howard Hughes Medical Institute and Gretchen Stone Cook Professor of Biomedical Sciences at the University of Massachusetts Medical School, thinks that rushing to any conclusions about GM relevance is premature. “If you could dream up a molecule that you would worry about [for GM foods], this wouldn’t be it,” he said.

The deeper question, Zamore said, lies in the assertion that single-stranded RNA molecules like these microRNAs, or miRNAs, which silence expression of their RNA targets, can survive the digestive tract. They are “very fragile,” he said. The idea that these RNAs would not be immediately destroyed by the digestive enzymes of the gut “is controversial, to say the least,” he added. “Hundreds of millions of dollars have been spent trying to stabilize single-stranded nucleic acids in the bloodstream, let alone the digestive tract, and unmodified RNA has never been found to survive.”

But Zhang disagreed, pointing to a 2008 paper in which he and his colleagues demonstrated that endogenous animal miRNA could exist stably in the bloodstream, suggesting that blood-borne miRNAs somehow resist being broken down. So the new findings that miRNA from plants can be stable in blood or other tissues are not unprecedented, he argued. These latest results also raise the “surprising possibility that miRNAs derived from plants are especially stable, although this will need to be confirmed by others,” said plant biologist Eric Lam, a professor at Rutgers State University. Lam also noted that the miRNAs in question were ingested as part of plant tissues, not as unprotected RNAs, a possible explanation for their ability to survive the animal digestive tract.

Zamore is also concerned about the potential for cross-detection between plant and animal RNA sequences, given the short length of miRNA molecules, which average about 22 nucleotides, he said. “There’s a real likelihood that there will be at least one sequence in (the mouse or human) genome that matches the sequence from the plant.” As a result, the Zhang team’s findings could reflect degraded animal RNA sequences, rather than plant miRNA, he said, adding that the study design allowed for one mismatch within the detected sequences, increasing the likelihood of a fortuitous cross-detection.

Lam believes otherwise. While mismatching is “possible,” he said, it’s “not very likely.” Zhang added that the group performed an analysis for a chemical signature specific to plant miRNAs that “clearly demonstrated (that) serum miRNAs we detected were the exogenous plant miRNAs.”

Even if one accepts the premise that the RNAs identified in the study were, in fact, of plant origin, however, Zamore questions whether the levels detected have any meaningful impact on the animals. For miRNAs to be effective as interfering RNAs, Zamore said, they must be present in a quantity sufficient to match the quantity of the RNA targeted for silencing. “MicroRNAs function in cells at remarkably high levels,” he said. “For example, miRNA-122, which controls cholesterol production in the liver, is present at a half million molecules per cell.” The Zhang paper describes detecting the equivalent of just 853 copies per cell.

But Zhang argues that even these low levels are relevant, referring to previous studies that have identified “biologically active” levels of miRNAs ranging from 700 to 4,450 copies per cell. Lam noted that the relevant number probably depends on the specific RNA molecule. “It is at least possible that some small RNAs are more potent than others,” he said.

One thing that Zhang, Zamore, and Lam seemed to agree on is that unanswered questions remain, such as whether the RNAs are further modified in some way to pass digestion and how they affect human physiology. Indeed, Zhang says that the editor who rejected the paper as “too extraordinary” expressed interest in the group’s “next similar story.” Given the interest the first installment has generated, the editor won’t be alone in that interest.

Clarification (April 16, 2012): This story has been updated from its original version to clarify that plant miRNAs were found in the bloodstream of both mice and humans and in mice livers.