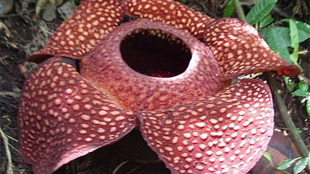 Rafflesia arnoldiiWIKIPEDIA, MA_SUSKAPlant cells photosynthesize using chloroplasts—small structures that were once free-living bacteria and retain their own DNA. Even when plants lose the ability to photosynthesize, they retain a genome in their plastids, and some scientists have argued that these genes are indispensible.

But two teams have now independently found the first examples of plants whose plastids seem to lack a genome, including a giant rot-scented flower and a group of single-celled algae. Neither case is iron-cast yet, but given the teams’ intense searches, these plants’ plastid genomes are either missing, well-hidden, or can be found only at very low levels.

Jeanmaire Molina from Long Island University and Michael Purugganan from New York University focused on Rafflesia lagascae—a Philippine parasite that does not photosynthesize, and lacks stems, roots, and leaves. The only sign of its existence is a huge red flower, which protrudes from its host vine...

R. lagascae still has plastid-like structures in its cells but, despite using a variety of methods, the team could not find any hints of an intact plastid genome. “It’s hard to prove a negative, but we came up with controls to make sure we got it right,” said Purugganan. They tried different methods for assembling fragments of sequenced DNA or identifying plastid genes. They easily found R. lagascae’s mitochondrial genome, which also derived from ancient bacteria. And they showed that in other plants, like Arabidopsis thaliana, non-photosynthetic tissues like roots still contain huge amounts of plastid DNA.

Molina and Purugganan did detect 46 small fragments of plastid DNA, but none of them amounted to full genes. Even if they were, these genes would have so many mutations that they would not be functional. These plastid DNA fragments remain a mystery, although a third of them may have come from the host vine, the researchers proposed.

Meanwhile, David Smith from the University of Western Ontario and Robert Lee from Dalhousie University found similar results in Polytomella—a genus of single-celled, colorless, freshwater algae. It too has a plastid but not a trace of a plastid genome. Smith and Lee also showed that while the alga’s nucleus produces proteins that are used in its plastids, none of these are involved in expressing plastid genes—another sign that such genes do not exist.

If these plants have genuinely lost their plastid genomes, neither team knows why. “One possibility is that Rafflesia parasitism started in the mid-Cretaceous,” said Purugganan. “It may be that it just took some time to evolve the mechanisms whereby you can safely get rid of the chloroplast genome.” Smith and Lee suggested that Polytomella may be generally prone to gene loss in its organelles—its mitochondria have among the smallest genomes of any plant.

“These studies show that plastids can at least lose their genome given the right circumstances, which opens up the big question: Why do they have genomes at all?” said Smith. “We don’t know the answer to that.”

After all, non-photosynthetic plants, including parasites like Rafflesia, still retain plastid genomes, albeit heavily reduced ones. Even the malaria parasite Plasmodium, which descended from the same photosynthetic ancestor as plants, still clings onto its plastid genome.

Some scientists have argued that plastid genomes include essential genes with metabolic roles, such as making heme. But Rafflesia and Polytomella suggest that such genes are either not vital or have been relocated. Both teams now want to completely sequence the nuclear genomes of their respective plants, to see if they contain the missing plastid genes. Smith said he hopes that other scientists will investigate these plants using microscopy and stains that bind to DNA. “The final verdict will come in when lots of people try lots of approaches,” he said.

“Showing convincingly that something does not exist is always a challenge in science,” said Kirsten Krause from The Arctic University of Norway, who has investigated plastid evolution but was not involved in the studies. “The authors of both publications were wise to leave a back door open by indicating that plastid genome loss is a possible conclusion of their findings but not—not yet?—a new fact.”

In an e-mail, she added, “I am, nevertheless, convinced that that the publications will ignite a new wave of scientific dispute and, hopefully, of research in this field.”