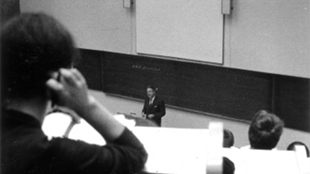 With increased competition for relatively flat research budgets, academics are more often turning to industry for support. But many are concerned that these relationships are pushing academic research towards commercialization, adding a mercenary element to research that should, in principle, be driven by scientific curiosity.

A new report out today (June 13) could help academics navigate the sometimes murky waters of collaborations with industry. From the American Association of University Professors (AAUP), the report tackles academic autonomy, intellectual property, conflict of interest, and other issues arising from the intermingling of academics and industry scientists, and provides both general principles and more targeted recommendations for how to keep things kosher. The AAUP hopes the guidelines, now open for public comment, will give faculty and universities a platform to shape discussions regarding their own institution’s policies.

The AAUP’s report is the product of more than a year of research and discussion by its committee on academic freedom and tenure, with input from several other AAUP departments and outside experts as well. It addresses industry-academic relationships within three major themes, said Gerald Barnett, who researches intellectual property management at the University of Washington in Seattle and gave input during earlier stages of the report: “academic freedom, scientific safeguards in the context of industry interaction, and the nature of governance.” The report emphasizes the need for increased participation by faculty in the decision-making process, and open dialogue between universities and their collaborators when grappling with how to assign intellectual property.

“[The report] is very strong” in the way it focuses on standards universities can adopt to preserve the public mission, said Risa Lieberwitz, a professor of labor and employment law at Cornell University, who commented on earlier drafts. She pointed to principles in the report that encourage faculty participation in evaluating project proposals, rather than ceding project choice to industry. “That wall of separation is extremely important to maintain,” she said. “If corporations have a role in judging research protocols and who gets funding—that wall’s already breached.”

With regard to conflicts of interest (COIs), the AAUP report recommends that both individual and institutional COIs be reported, and that universities draft conflict of interest management strategies and maintain standing committees to review these conflicts. “Overall, it’s a very useful document,” said Marilyn Field at the Institute of Medicine, a non-profit advisory group in Washington, DC. By providing a kind of checklist, the report will give faculty and universities standards to examine their own institutions’ policies, said Field, who added that an incentive, like the grading system used by the American Association of Medical Students when evaluating medical schools’ conflict of interest policies,  might be needed to encourage universities to adopt some of these principles.

Intellectual property is also addressed in the report, which recommends the faculty members retain control of their inventions, rather than being mandated to cede rights to their university or signing away those rights to industry partners. But even more importantly, the terms of the agreement need to be determined from the get go, said John Fuisz, a patent litigator in Washington, DC. Universities are beginning to be run in a more corporate fashion, he said, and thus need to adopt the other aspects of the business world, such as writing out contracts governing ownership before the projects begin.

The report also suggests that faculty should have more control over how their research is patented and licensed, rather than being subject to mandatory university policies. Barnett agreed with these recommendations, contending that the Bayh-Dole Act, on which many universities base their sole claim to their faculty’s intellectual property, has long been misinterpreted. Allowing faculty to control their own entrepreneurial paths will enable more research to become useful products, Barnett argued. “This will spark a real debate” among the tech transfer community, he said, “which is healthy.”

Encouraging universities nationwide to adopt these policies may be daunting, but Nelson is optimistic. The Executive Director of the Canadian Association of University Teachers (CAUT), Jim Turk, who participated in the AAUP’s drafting process, will work to get many of the recommendations adopted by his organization, Nelson said. Because the CAUT represents all Canadian universities except McGill University, this should serve as an example for US institutions. But Donald Stein, a neuroscientist at Emory University who commented on earlier drafts, is not as convinced , arguing instead that external pressures from government, like those that helped amend animal research policies, may be necessary to force universities to comply with such recommendations. At the very least, Nelson hopes the guidelines will spark discussions among faculty and administrators regarding their own institutions’ policies. Not all the recommendations will fit every institution, he said, but inertia should no longer be an excuse for a lack of guidelines.

The public should also be aware of the AAUP’s recommendations, said Stein, who fears that universities are moving away from their primary purpose of serving a public good to become more corporate producers of education. “The public should know about how the academic mission is changing.”