In 2002, conservationist Andrew Balmford and colleagues published a study that reported the disheartening ability of school kids to recognize more Pokémon creatures than real plants and animals. While many simply shook their heads in dismay, science outreach specialist David Ng of the University of British Columbia decided to do something about it, and in 2010 he appealed to the collective wisdom of the internet to help him out.

"We put a line, literally a single sentence that said 'Kids know more about Pokémon than they do about plants and animals in their backyard, and we'd like to do something about that,' and released it to the web, and sat back and waited to see what happened," said Ng.

What resulted was a brand new card game, based on the attributes of real flora and fauna. Phylo asks players to use their species cards to create food chains and ecosystems,...

David Ng is keen to point out though that it's "not his game." Although he's still actively involved in pushing Phylo into new arenas, such as producing decks specifically for museums, Phylo is at its heart a crowd-sourced phenomenon. The games rules were worked out by enthusiastic gamers, all the artwork is donated, and people volunteer for all sorts of other tasks, such as designing a website that allows people at home to print off their own cards and start playing.

Whether Phylo actually does increase children's awareness and knowledge of real creatures and plants is still unknown, but Ng thinks getting the game into schools could help answer this question. A project is underway to allow school children to create their own decks of cards, and Ng hopes to get teachers and other researchers involved, to see if Phylo can transcend being just a fun game to become a true educational resource.

Watch Ng talk more about the project at a recent event where visitors could view some of the Phylo artwork and learn to play. 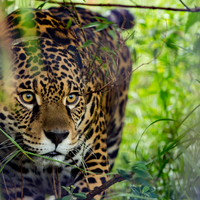