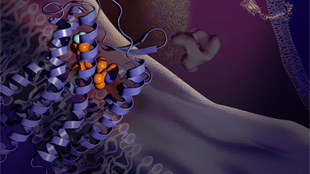 CCR5 bound to MaravirocWU LAB, SIMMAfter a six-year struggle, a team of Chinese scientists has produced a three-dimensional portrait of CCR5, a human protein that allows HIV to invade host cells.

This detailed snapshot, in which CCR5 is attached to the HIV drug Maraviroc, provides important clues about how HIV infections begin and how they might be stopped. “Our hope is to lay a foundation for the next generation of anti-HIV drugs,” said Beili Wu from the Chinese Academy of Sciences in Shanghai, who led the study. Her team’s results were published today (September 12) in Science.

“It’s very exciting,” said James Hoxie from the University of Pennsylvania, who studies how HIV interacts with human proteins and was not involved in the study. “For the first time, we can look at structures that are the keys to how the virus homes in on particular cell types. That’s...

HIV infections begin when gp120, a protein that studs the virus’s outer coat, docks at a receptor molecule called CD4 on the surface of white blood cells. This interaction changes the shape of gp120, allowing it to bind to a second co-receptor—either CCR5 or CXCR4.

Normally, CCR5 and CXCR4 respond to chemicals called chemokines, which help alert the immune system to incoming infections. HIV hijacks these molecules to start infections itself. Once bound, HIV can fuse with the cell’s membrane, infiltrate, and start copying itself.

To better understand the process of HIV infection, Wu set out to solve the structure of both co-receptors in 2007. She cracked CXCR4 in 2010, while a postdoc at The Scripps Research Institute in La Jolla, California, before returning to China to deal with CCR5 as the head of her own research group.

It has been a challenging task. Both CCR5 and CXCR4 are examples of G-protein coupled receptors (GPCRs)—a class of proteins that snake through a cell’s membrane seven times, allowing external signals to trigger biochemical events inside. GPCRs are involved in everything from vision to inflammation. They are also unstable, and only found at very low levels. It is hard to gather enough of them to form the large, pure crystals needed to fully determine their structure.

Wu’s team, led by student Qiuxiang Tan and research assistant Ya Zhu, solved this problem by fusing CCR5 to a small protein, which stabilizes the receptor molecule without changing its shape. They also added Maraviroc, an anti-HIV drug that targets CCR5, and solved the structures of the drug and the protein bound together.

They showed that Maraviroc does not bind to the same part of CCR5 that gp120 or chemokines do. Rather, the drug attaches to a different site, which warps CCR5’s shape, locking it into an inactive state where it can no longer interact with gp120. This ability, which previous studies had suggested but not confirmed, explains how the drug thwarts HIV infection.

“CCR5 is very important in the HIV field,” said Bernard Lagane, who studies HIV at the Pasteur Institute in Paris and was not involved in the study. HIV often evolves resistance against drugs that target CCR5. “Knowing its structure will allow us to rationally and more efficiently design molecules that will act against resistant viruses,” he said. It might also be possible to develop drugs that block HIV without compromising CCR5’s ability to bind to chemokines and propagate immune signals.

Wu’s team also compared the structures of CCR5 and CXCR4 and simulated their interactions with different HIV strains. They found that these receptors have small but important differences in the pockets that gp120 binds to. Subtle features such as the spread of electric charge in the pocket, and physical obstructions from surrounding amino acids, can explain why some viruses prefer one receptor to the other.

And this choice is important. The vast majority of HIV viruses use CCR5 to break into cells, but some eventually switch their allegiances to CXCR4. When this happens, the virus can attack a broader range of cells, and patients progress toward AIDS more quickly. “Now that both structures are solved, we can find ways of blocking binding to both co-receptors,” said Wu.

She also hopes to use the structure of CCR5 to understand why people with a certain mutation in the protein, known as delta-32, are almost invulnerable to HIV.

“The limitation is that any crystal is a snapshot,” said Hoxie. CCR5 can take on many shapes and, by adding Maraviroc, Wu locked it into a shape that would not allow HIV to start an infection. “Obviously, I’d also love to see how the protein enables infection too,” said Hoxie, “but there’s no question that we’re already looking at the molecule in a way we’ve never been able to.”