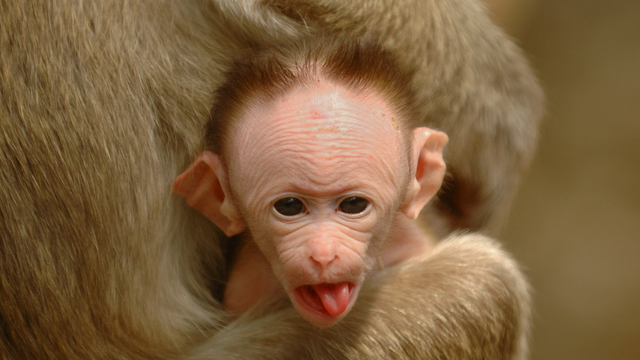 The devastating developmental damage that Zika infection can cause when children are infected in the womb is abundantly clear. But a big question has remained: what about babies infected shortly after birth? To gain some insight, researchers infected infant rhesus macaques with Zika virus after they were born, and observed that monkeys have abnormal brain development and display atypical behavior at six months of age. The research is published today (April 4) in Science Translational Medicine.

The study “is the first of its kind to really show how pathogenic Zika can be in infants, even when infants are postnatally infected,” says Dan Barouch, a virologist at Harvard Medical School who was not part of the study. “There’s certainly correlative clinical data that would make us think that similar problems could very well occur in humans as well.”

Zika infection during pregnancy is associated with congenital...

See “Parts of U.S. Saw an Increase in Zika-Linked Birth Defects in 2016”

“Other viral infections that occur postnatally have been associated with no real overt abnormalities early on, and then learning disabilities [appear] or other things that present in the school-age child,” says study coauthor Ann Chahroudi, a pediatrician at Emory University. She and her colleagues thought the same could be true for Zika.

They infected six infant macaques with Zika five weeks after birth, and monitored the monkeys’ brain development and behavior, as well as that of two healthy controls, for a year. In the infected monkeys, the virus invaded the peripheral and central nervous systems, causing inflammation and cell death. Six months after exposure, the researchers analyzed the macaques’ brain development with magnetic resonance imaging (MRI) scans. They saw structural differences in the infected monkeys’ hippocampi as well as in the functional connectivity between the hippocampus and amygdala. These structures, part of the brain’s limbic system, are involved in processing fear and other emotional responses. 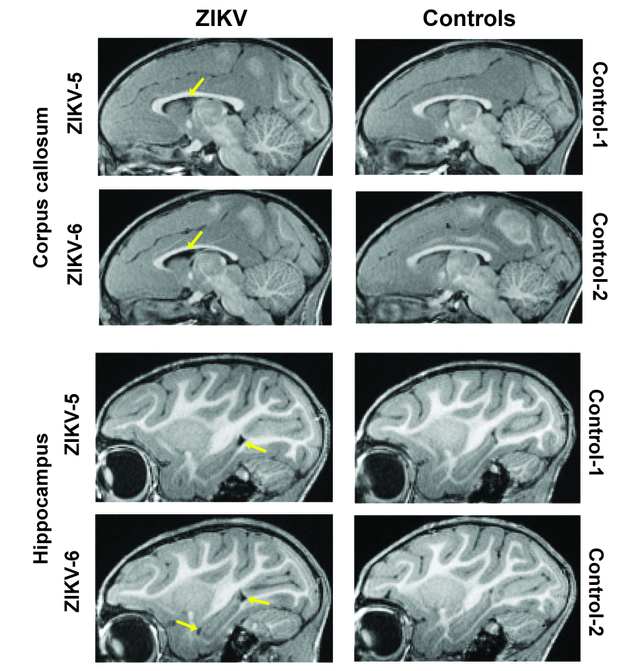 The scientists then measured the macaques’ behavioral responses to a stress test. The Zika-infected animals “behaved in a species-atypical manner,” says Chahroudi. They were making abnormal vocalizations and failed to show the fear responses expected in macaques at that age. The abnormal responses indicate “that the processing in the limbic system isn’t happening correctly,” she explains.

See “Zika Virus Persists in the Nervous System and Elsewhere”

The study “really highlights the need to develop interventions,” says Koen Van Rompay, an infectious disease scientist at the University of California, Davis. If Chahroudi’s findings are confirmed in human studies, “perhaps we should consider immunizing infants,” he says. So far, there are no Zika vaccines approved for use. If a baby does become infected, antiviral drugs that can block Zika—particularly in the brain—will be critical, and “the earlier you can intervene, the better,” he adds.

“We can’t really know whether a Zika vaccine should be given . . . until we see the clinical performance of these vaccines,” says Barouch. Once an immunization is available, men and women should be vaccinated before pregnancy to protect from congenital Zika infection, he says, “but whether that will protect against postnatal infection, I think time will tell,” he says. Infants infected in utero or after they’re born should be monitored at critical times in their development long-term, he adds.

As a pediatrician, Chahroudi says, if she saw a case of postnatal Zika infection in one of her patients, she would recommend monitoring and cognitive testing. She admits she can’t say what the long-term outcomes could be for infected macaques—let alone human infants—based on results after one year. But the study provides important evidence that the postnatal Zika virus infection may have developmental outcomes “that are apparent long after the virus has cleared from the blood,” she says.