The tell-tale stench emanating from cattle farms is more than stinky—it can be devastating for the environment. That’s because an enzyme in cow pies liberates ammonia from the urea in urine, sending it into the atmosphere. This ammonia washes down with the rain, changing soil and water chemistry and leading to effects such as harmful algal blooms, damage to vegetation, and reduced biodiversity.

But a new study published yesterday (September 13) in Current Biology suggests a way to stop this problem at the source: by putting cattle in charge of separating their own waste products. The team, led by applied ethologist Jan Langbein of the Research Institute for Farm Animal Biology in Germany and PhD student Neele Dirksen, successfully convinced calves to utilize bovine latrines, dubbed “MooLoos.”

The Scientist spoke with Langbein about how—and why—his group set out to potty-train baby cattle.

The Scientist: What on Earth gave you and your group the idea to toilet-train calves?

Jan Langbein: The problem is that [90 percent of] ammonia [comes] from agriculture, and 50 percent of this 90 percent comes from cattle farming. . . .We thought . . . can we do something starting from the behavior of the animal to reduce ammonia emissions from the cattle barn?

You can train infants to use a toilet, you can train cats to use a toilet, you can train your dog to use some kind of toilet—or just not void in the flat. You can even train pigs to use the toilet. So why not cattle? Well, the general belief is that cattle walk through the grassland and don’t care about their voiding. They void wherever they stand, wherever they walk. And there was a general belief . . . [that] it’s impossible to train cattle to develop what we call “interoceptive awareness” about signals coming from the bladder. And we thought, well . . . let’s try to train them.

TS: You mentioned in your paper that earlier attempts to toilet-train cattle had only been partially successful. What did your team do differently?

JL: About ten years ago, the first group . . . started to train certain elements of this toilet sequence, and they found that cattle probably can develop some interoceptive awareness, because they trained them [so that] whenever they voided in the barn, [the researchers] gave them a reward. After a while, the cattle oriented towards the guy with the reward before they ended voiding. That means they got the idea—they established some kind of an association between ‘when I void, I get a reward.’

But that is just one step of [the whole] toilet sequence, and another group . . . started toilet-training in a different way. They injected a diuretic while the calf was in a box. . . . Whenever the calf urinated after getting this injection of the diuretic, it got a reward. Later in the test, they did not inject the diuretic, but looked at the frequency of voiding in this box in comparison to control calves. And they found, yes, [the] voiding frequencies of previously trained calves was higher. . . . That gave us some confidence that it should be possible to train the whole sequence.

Eleven out of sixteen calves reached the success rate of about 80 percent of voiding in the latrine. So, eight out of ten urinations happened in the latrine, and only two outside. Not perfect, but quite [good].

A calf demonstrates how researchers can train cattle to urinate in latrines to keep their solid and liquid waste separate, reducing harmful ammonia emissions. Once successfully using the latrine, the calf receives a reward (not unlike a sticker chart for a potty-training toddler!).
Research Institute for Farm Animal Biology

TS: How long did it take from start to finish to get the cows to 80 percent?

JL: Because we had to inject this diuretic to increase the frequency of urination during a 45-minute training session, we were allowed by the ethical committee to do only 15 sessions. So we trained the calves [to perform] the whole training sequence . . . within 15 sessions of 45 minutes.

TS: Did that take days or weeks or months?

JL: We had three training sessions in a week, on Monday, Wednesday, and Friday, so five weeks.

TS: I think parents of toddlers would be very impressed!

JL: That’s what we wrote in the article. It’s . . . comparable to toddlers. But you have to keep in mind that we used a diuretic, so within this 45-minute training session, they urinated between three to eight times.

TS: What if cattle farms wanted to adopt this technique? What sort of infrastructure would they need to implement to actually be able to capture and process the waste?

JL: That’s always the question—how fast can you transfer . . . experimental results into practice? And I have to admit that [it will take] a couple of years. This study was done in a real experimental environment. We had [what we called] a behavior arena, and within this arena, we built up the latrine and a ten-meter-long alley, which leads to the latrine, and the calf could only walk around in the ally or could enter the latrine.

Our study was a proof-of-concept. Is it possible at all to train cattle? Yes, it is. . . . Now we [are planning] a follow-up project where we want to transfer these more experimental results into more practical conditions. 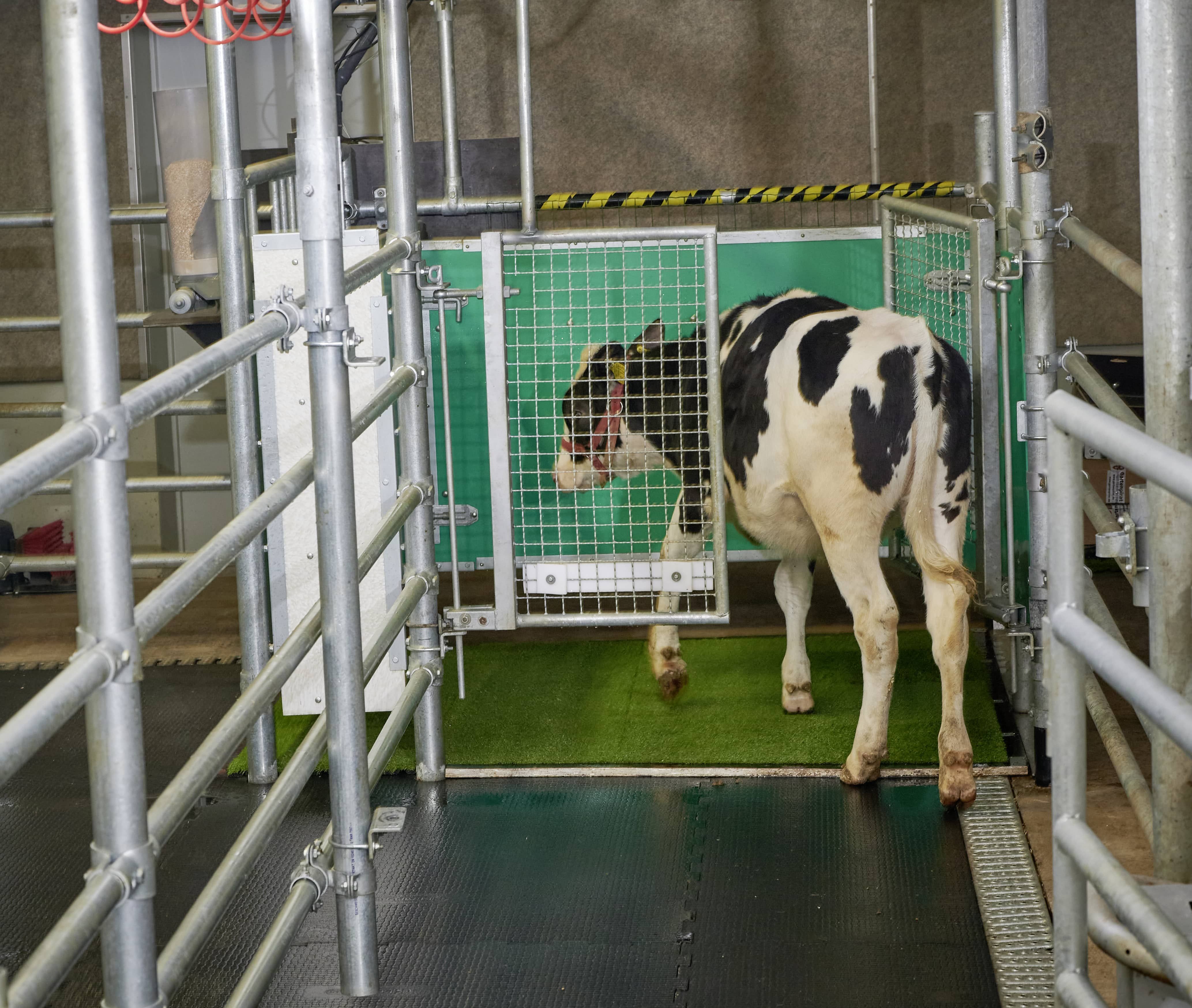 TS: So the latrine wasn’t a literal toilet—can you describe what it was like?

JL: It was an area of two [by] two meters with an entrance gate . . . where the calves could open this swinging door . . . to enter the latrine. The latrine had green walls and artificial turf. . . . It’s semi-permeable, so the urine does not [splash on] the legs of the calf.

Everything is green in this latrine area, so that should help the cows to distinguish the latrine from any other part of the barn. And later on, we will design the latrine in a similar way so it’s easy for the calf to recall, “Hey, this over there in my group housing barn looks like the former toilet. I should go there for voiding.”

TS: What was the most challenging part of this study?

JL: The most challenging part was the step from Phase One to Phase Two. Phase One was . . . a reward for every single urination. And when the calves in this phase oriented towards the reward dispenser before [ending] urination, we opened the door and allowed the calf to continue to the next phase, where it was allowed to stay outside.

And now the question was, would the calf not only associate the urination with the reward while inside the latrine, but will the calf listen to internal signals coming from the bladder and activate the motoric pattern going into the latrine? That was the most tricky thing. But they got it.

[Cows] are not such stupid animals as we think they are. They really look for the best food on the pasture, they have very, very sophisticated social interactions. . . . And if we ask them to solve certain problems, they can learn a lot.

TS: Is there anything about cows that you think people tend to misunderstand?

JL: Cows are farm animals that are . . . in the barn [all day] and have nothing to do. Food is for free, water is for free, so they lay down for most of the day. And if you go into the barn, you can get the impression they are doing nothing throughout the day. But that’s only because we don’t give them the possibility [of doing something].

[Cows] are not such stupid animals as we think they are. They really look for the best food on the pasture, they have very, very sophisticated social interactions. . . . And if we ask them to solve certain problems, they can learn a lot.

We here in Germany . . . try to introduce cognitive enrichment into the housing of cows, of sheep, of pigs—because the normal environment there on the farm is really boring for them, and so they are not challenged enough.

We think [the latrine] is not only a way to reduce ammonia emissions, maybe it’s some kind of cognitive challenge for the cow, too.

TS: Is there anything else you want to mention about the study or about cows?

JL: Well, I like cows. They are clever . . . and they are really cute animals, if you try to understand them.