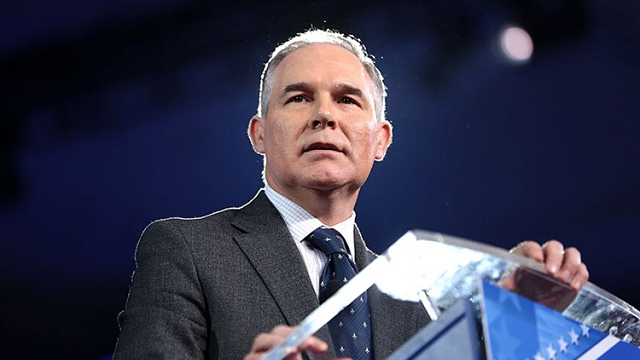 WIKIMEDIA, GAGE SKIDMOREScott Pruitt, head of the US Environmental Protection Agency, is under growing pressure to resign amid snowballing allegations of ethical misconduct. The latest criticisms follow a report by The Washington Post earlier this week that exposed Pruitt’s efforts to use his position to line up job opportunities for his wife.

Senator James Inhofe (R-OK.), once Pruitt’s political ally, was particularly critical in a conversation with conservative radio host Laura Ingraham on Wednesday (June 13), Vox reports. Inhofe noted that the EPA’s deputy administrator, Andrew Wheeler, was well qualified to take over the top post. Speaking of Pruitt's role, “I think something needs to happen to change that, and one of those alternatives is for [Pruitt] to leave that job,” he said. Ingraham herself has called on Pruitt to resign.

According to Reuters, Inhofe and several other Republican senators yesterday called for Pruitt to testify before...

Also on Wednesday, conservative magazine National Review published an editorial entitled “Scott Pruitt Should Go.” In the article, the editors write that “we are now at a point where a good week for Pruitt sees only one report of behavior that is bizarre or venal.” They also noted Wheeler’s ability to take over. “Pruitt is replaceable. And he should be replaced,” they write.

The pressure on Pruitt has been building for some time. Already by the middle of April, four House Republicans had called on Pruitt to leave the post after reports surfaced about the administrator’s use of taxpayer money to fund first-class travel and to build a $43,000 soundproof booth in his office. “Yes EPA Administrator Scott Pruitt should resign,” tweeted Representative Frank LoBiondo (R-NJ) on April 22. “Wrong fit from start for agency dedicated to protecting our environment.”

Not everyone has been critical. Last week (June 6), President Donald Trump told an audience at the Federal Emergency Management Agency headquarters that “EPA is doing really, really well,” Reuters reports. Addressing Pruitt directly, he added, “Somebody has to say that about you a little bit, you know that, Scott.”

Combined with a $3.5-million bill for a round-the-clock security detail, Pruitt’s spending has now cost the taxpayer more than $3,750,000, according to a tally kept by The Washington Post. The EPA has yet to comment on the matter, according to the Post.