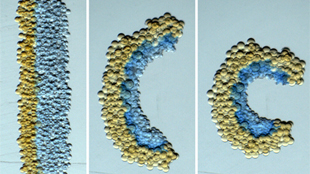 Synthetic tissue folds from a sheet into a tubeVILLAR ET AL, SCIENCE/AAASThree-dimensional printers have used plastics and metals to make everything from dolls to planes to replica dinosaur skulls. Now, researchers at the University of Oxford have created a 3-D printer that extrudes grids of watery droplets that mimic the properties of living tissues.

These synthetic tissues can be printed with the consistency of brains or fat, and they can be loaded with proteins that allow them to conduct an electric current, like neurons, or be programmed to contract and fold like a sheet of muscle. The results, published today (April 4) in Science, could lead to new ways of packaging drugs or repairing damaged tissues.

“It's still too early to know how the technology will be used in different arenas, but it is nonetheless an important step forward for 3-D printing,” said Christopher Chen, a bioengineer...

Although some 3-D printers have already been customized to print with actual cells, the researchers opted for a different approach. “We don’t know if, in the long term, those cells would proliferate in the body and cause problems,” said Oxford’s Hagan Bayley, who led the study. “We’re making very simple materials that can mimic tissues but don’t use living cells.”

The project had a simple beginning. Bayley’s team was studying the properties of membrane proteins by recording the currents that flow across them as they sat in artificial cell membranes lying between two separate chambers. The researchers found a way of replacing each of the chambers with a tiny droplet, containing just 100 nanoliters of fluid, minimizing the amount of reagents needed for the experiments. “Then we thought: if we could put two droplets together, maybe we could put lots of droplets together,” said Bayley.

Oxford collaborator Gabriel Villar eventually created a customized 3-D printer that ejects droplets of around 65 picoliters from two nozzles, at the rate of one per second. The droplets are “printed” into oil and, as they settle, they build up a membrane of lipids just like living cells. Tens of thousands of them can be positioned in rows just a few micrometers long. “No commercial printer can do that,” said Bayley.

By loading a subset of the droplets with conductive membrane proteins, Villar could create a path through the tissues that conducts electricity. This mimics some of the properties of a neuron, and allows one end of the tissue to communicate with the other side very quickly and along a fixed path.

Villar also created self-folding tissues by printing droplets with different salt concentrations. Once laid out, the droplets automatically fold into shapes that would be very hard to print directly—such as a tube from a sheet, or a hollow sphere from a four-petal flower. “It’s the beginnings of a muscle-like material if we could make that reversible,” said Bayley.

These synthetic tissues are surprisingly stable. The droplets can be printed within a small ball of oil sitting on a metal frame and once the excess oil is drawn away, the remaining tissue can last for several weeks and is “quite happy to survive in water,” said Bayley. This means that they could be injected into the body, opening up a variety of potential medical applications.

Bayley imagines that the tissues could be used to smuggle in molecules that need to react together to produce a drug, but are too unstable to put in a pill or intravenous drip. By loading them into separate droplets, they could be sent to a target and mixed at the target site within the body.

“The longer term—and very speculative—goal is to see these materials being used to support or replace failing organs,” Bayley said. “We want to make hybrids where we can couple them with living tissues and have them interact with each other.”

“This type of research not only aids in marketing the power of synthetic biology, but it could also spark interest in 3D-printing communities that have historically focused on traditional engineering materials, like alloys and polymers,” said Andy Sarles, a mechanical engineer from the University of Tennessee. “They could greatly benefit from expanding their choices in printable inks to biomolecules and soft materials.”