ABOVE: Berna Gomez wears the special glasses that interface with her implanted device, allowing her to see shapes and certain letters.
COURTESY OF EDUARDO FERNÁNDEZ, MIGUEL HERNÁNDEZ UNIVERSITY

A woman who totally lost the ability to sense light 16 years ago temporarily regained enough vision to discern letters and shapes thanks to a brain implant that interfaced with special glasses, reports an October 19 paper in The Journal of Clinical Investigation. A clinical trial of the device involving up to four other patients is scheduled to continue into 2024.

“One goal of this research is to give a blind person more mobility,” coauthor Richard Normann, a researcher at the University of Utah's Moran Eye Center, tells NPR. “It could allow them to identify a person, doorways, or cars easily. It could increase independence and safety. That's what we're working toward.” 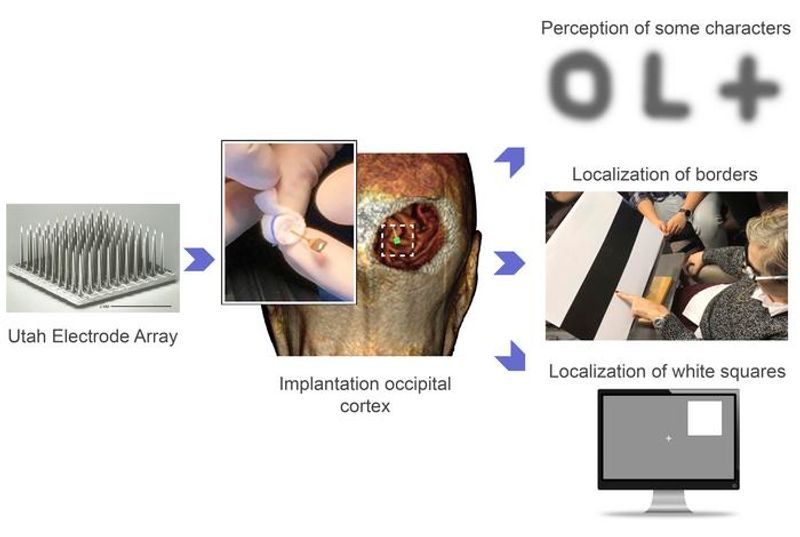 Berna Gomez, now 58, lives in Spain and taught high school biology until she became completely blind in a matter of days after a condition known as toxic optic neuropathy severed the connection from her eyes to the brain, according to a statement from the University of Utah. Gomez was the first person to receive the Utah Electrode Array (UEA), which was developed by Normann with the aim of restoring sight for millions of people experiencing blindness.

The UEA is a 4-square-millimeter implantable device that contains 96 electrodes, each 1.5 mm in length. This device is surgically implanted into the brain, penetrating the surface of the visual cortex, and when activated in certain patterns, it can allow the brain to perceive shapes. Eduardo Fernández of Spain’s Miguel Hernández University and his colleagues developed glasses with a specialized camera that can perceive the outside world and translate a rough version of what it sees to the UEA.

After getting the device, Gomez worked with Fernández’s lab for six months, eventually learning how to detect the edges of simple shapes, certain letters, and even play a video game that required her to identify which side an action happened on. At the end of the trial, the device was surgically removed, and the authors report no complications following its removal.

During the trial, the number of shapes and letters Gomez could discern were limited. The researchers estimate that between 7 and 10 UEAs could provide enough information to give a blind person a level of independence, though further studies are needed to determine how long the implants are effective and can safely remain in the brain.

“As a blind person you don’t know where a door is, or a window, or a person,” Gomez explains in the University of Utah statement. “With this you would at least know something was there.”