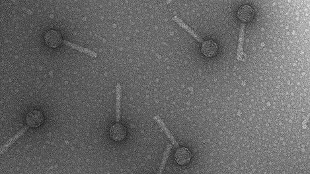 BacteriophageWIKIMEDIA, MOSTAFA FATEHIAs research surfaces supporting the role of beneficial bacteria in human health, immunity, and normal childhood development, some scientists are beginning to look at even smaller biological entities in our gut. In a study published today (May 2) in Proceedings of the National Academy of Sciences, researchers have shown that bacteria-attacking viruses, called bacteriophages, reside in the protective mucus layer of many animal species and can help keep bacterial populations in check.

“The study is ground breaking and quite novel,” Rick Bushman, a microbiome researcher at the University of Pennsylvania Perelman School of Medicine, told The Scientist in an email. “The finding that phage can bind mucous and thereby protect cells from bacterial infection is convincing and exciting.”

Working with corals, fish, and human samples, researchers from Forest Rohwer’s lab at San Diego State University began to notice there was a much higher percentage of...

The team found that bacteriophages expressing an Ig receptor on their surface are more likely to get stuck in the mucus layer. Although mucus is normally quite sticky, phages are small enough to “diffuse throughout without getting stuck. With the receptor, they get stuck longer,” said first author Jeremy Barr, a postdoc in the Rohwer lab. An estimated 25 percent of sequenced bacteriophages contain a gene for the Ig receptor, although Barr thinks that the total number of phages in nature with the receptor may be much higher.

To test whether mucus-bound bacteriophages could protect against bacterial infection, researchers added E. coli to mucus-producing human cell lines that had or hadn’t been pretreated with bacteriophage. Cells with a pretreated mucus layer were protected from the bacterial infection, whereas those that lacked the phage were not. Although it’s unclear whether mucus-bound phages can specifically kill pathogenic bacteria or if they simply expand an animal’s normal innate immune mechanisms of keeping beneficial bacteria growth in check, Barr said it’s a question the lab is interested in pursuing.

“The possibility that humans aggregate phage on our mucosal surfaces to help our immune system defend against bacteria, and that phage may benefit by gaining easier access to bacteria within the mucus, suggests a new type of mutualism is occurring between humans and phage,” microbiome researcher Justin Sonnenburg from Stanford School of Medicine, who was not involved in the research, said in an email. “The implications for human health and the resident microbiota are intriguing and warrant further investigation.”