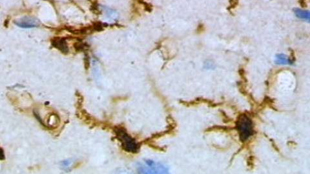 Rat microgliaWIKIMEDIA, GRZEGORZ WICHERAs the brain matures, a group of resident immune cells called microglia crawl between the growing neurons and engulf invading microbes or damaged cells. They are also thought to pluck off some of the synapses that connect different neurons.

This destructive act is important for the developing brain. The microglia prune away weak or unwanted connections, allowing more productive ones to become stronger. Without this “synaptic pruning,” a team of researchers led by Cornelius Gross at the European Molecular Biology Laboratory has shown that mice grow up with weaker connections between different parts of their brains.

“This is one of the few robust features seen in people with autism: their brain regions don’t synchronize well,” said Gross. “We looked and found that these mice have what are typically thoughts to be autism-like behavioral features.” In other words, mice without microglia were more likely to show...

“The finding of a microglial role in synaptic pruning, and ultimately the emergence of efficient distributed networks, is very interesting,” said Ralph-Axel Müller from San Diego State University in an e-mail to The Scientist. But while this mechanism may be involved in some cases of autism-spectrum disorders (ASDs), “it probably captures only a small facet of the biology underlying ASD,” he added. After all, hundreds of genes and many environmental factors are suspected to play a role in the onset of autism.

During their first weeks of life, when baby mice grow large numbers of new synapses, their neurons also produce a signaling protein called fractalkine. The protein binds to a receptor called Cx3cr1 that is found exclusively on microglia, and attracts them.

In 2011, Gross’s team severed this line of communication between neurons and microglia by breeding mutant mice that lacked the Cx3cr1 protein. Although the mice ended up with more synapses than usual, these connections were also weak and immature.  Now, postdocs Yang Zhan and Rosa Paolicelli have shown that these early differences persist into adulthood.

In particular, the rodents’ neurons lacked a feature called “synaptic multiplicity.” When one neuron first meets another, it initially connects through a single synapse. Over time, it sprouts new synapses and makes two or three contacts with its target. This strengthens the connection between the two cells, so that an electrical signal in one leads to a more pronounced response in the other.

“That’s what missing in these mice,” said Gross. “They keep the one-to-one contact.” He suspects that the microglia, by pruning away unwanted synapses, free up space or some other resources for the survivors to sprout more connections to their targets.

This weakened the longer-range connections between different regions of the rodents’ brains. Zhan and Paolicelli measured this connectivity by using electrodes to check if the electrical activity in different brain regions was fluctuating in sync. They also used functional magnetic resonance imaging (fMRI) to measure whether blood was flowing synchronously to connected parts of the brain.

Both techniques showed that the mutant mice had weaker connections between an area called the prefrontal cortex (PFC) and several other parts of the brain. The PFC is involved in higher abilities like planning, predicting future outcomes, and controlling social behavior. “This is very suggestive of what people see in the autism literature,” said Gross. “The functional connectivity of PFC is most affected in autism.”

The team also found that the mutant mice showed differences in their social behavior. For example, they spent more time grooming themselves when placed in a new cage. They were also less likely to explore tubes that housed their mothers or other mice, especially when these other animals were active and awake.

These behavior changes related to the differences in the rodents’ brain. The team found that the electrical activity in two regions—the PFC and the hippocampus—became more tightly coupled when typical mice explore tubes containing other animals, but not when the mutant mice did so.

Gross admitted that these behaviors are not direct parallels to human ones, and noted that people’s social interactions are far more complicated. “These mice are not an autism model but they’re the best things we have,” he explained.

Müller added that people with autism show subtler differences in brain connectivity than the researchers presented for the mutant mice. Rather than weaker connections overall, they actually show signs of both over- and under connectivity in different parts of the brain.

“In my view, these patterns reflect differences in the ‘sculpting’ of functional networks,” said Müller. “There is less robust connectivity within the neurotypical networks, but more residual and ‘noisy’ connectivity with brain regions outside.” And impaired synaptic pruning might still explain this pattern.

Next, Gross wants to actually catch microglia in the act of plucking off a synapse, and to understand how they choose their targets. “What are the ‘Eat me’ or ‘Spare me’ signals?” he asked. “And are any genes that have been linked to autism involved?”

“Importantly, microglia, unlike other cells in the brain, can be replaced in the adult brain,” added Jonathan Kipnis from the University of Virginia in an e-mail. “We need to gain a better understanding of these cells to be able to better manipulate them in adulthood.”