ABOVE: Reconstruction of one of the pterosaur fossils
YUAN ZHANG/NATURE ECOLOGY & EVOLUTION

Scientists have announced the discovery of feathers in pterosaurs today (December 17) in Nature Ecology & Evolution. If confirmed, this report pushes the origin of feathers back 80 million years, into the Triassic.

“Our interpretation is that these bristle-type structures are the same as the feathers on birds and dinosaurs,” says palaeontologist Mike Benton at the University of Bristol in the UK. “This shifts the origin of feathers from 160 million years ago to 240 million years ago.”

The new research describes four kinds of cover on two pterosaur fossils dug up in China. One kind is a fuzzy, fur-like insulation that coated their heads, torsos, limbs, and tails. On parts of the heads and wings, the authors describe three types of curved, thread-like fibers that resemble modern feathers found in birds. “In a...

Before this discovery, feathery structures had been viewed as unique to the group of dinosaurs that includes the ancestors of modern-day birds and were presumed to have evolved during the Mesozoic Era. Pterosaurs, most paleontologists had thought, never evolved feathers.

Not everyone agrees that the fur-like cover on these two pterosaur specimens, technically called pycnofibers, are feathers. “I would challenge nearly all their interpretations of the structures. They are not hairs at all, but structural fibers found inside the wings of pterosaurs, also known aktinofibrils,” says pterosaur researcher David Unwin at the University of Leicester in the UK who was not part of the study. “They discovered lots of hair-like structures, but [don’t report any] wing fibers. I find that problematic.” Unwin suspects these fibers are likely to be present but have been mislabeled as feathers.

Unwin personally had viewed one of the fossils in China. He describes the two pterosaurs as looking like bats from a distance, but really weird creatures up close. “They look rather like small, naked bats. The animals described in this paper generally are agreed to be insectivores, analogous to swallows or swifts,” he explains, and thought to have hunted insects on the wing.

Twenty years ago, feathers were viewed as the distinguishing feature of birds. The ancient, bird-like Archaeopteryx was seen as the exception, a “missing link” evolutionarily for having a dinosaur-like skeleton, but also feathers. Then, feathered dinosaurs came to light around 1996.

Whereas modern birds boast around four types of feathers, their dinosaur relatives had many more. “Birds don’t have any other fundamental feature type that we don’t find in dinosaurs,” says Benton.

The feathered pterosaur fossils are 160 million years old, and the new study used microscopic and spectroscopic imaging techniques to describe the feather-like structures. “The latter is a non-destructive chemical analysis that produces a spectrum, with peaks corresponding to different chemical bonds,” explains coauthor Maria McNamara, a scientist at University College Cork, in an email. “The spectrum from the pycnofibers contains peaks present in modern melanin and keratin, supporting our hypothesis.” Unwin says chemically distinguishing between wing fibers and pycnofibers is not practical, as both likely contain keratin.

If pterosaurs had feathers then, it puts feathers’ origins further back in time, because the ancestor of dinosaurs and pterosaurs lived around 240 million years ago in the Triassic. The study scientists believe that the structures they describe are so similar to bird and dinosaur feathers that they have a shared origin. “This discovery shows that feathers originated much deeper in time and presumably evolved first for insulation,” says Benton. “That tends to confirm that warm bloodedness originated much earlier than we had thought and in a much wider group of dinosaurs and their relatives.”

“This is a very important discovery,” says Kevin Padian, a palaeontologist at the University of California, Berkeley, “because it shows that integumentary [skin] filaments evolved in both dinosaurs and pterosaurs. That’s not surprising because they are sister groups, but it is good to know.”

Padian draws attention to the pycnofibers’ “hair-like structure” as illustrating that they served as insulation. This is yet another characteristic of dinosaur and pterosaurs, along with high growth rate, pointing to their common ancestor as warm blooded.  “I wish the illustrations in the paper were better, but there is no reason to doubt them,” he adds. 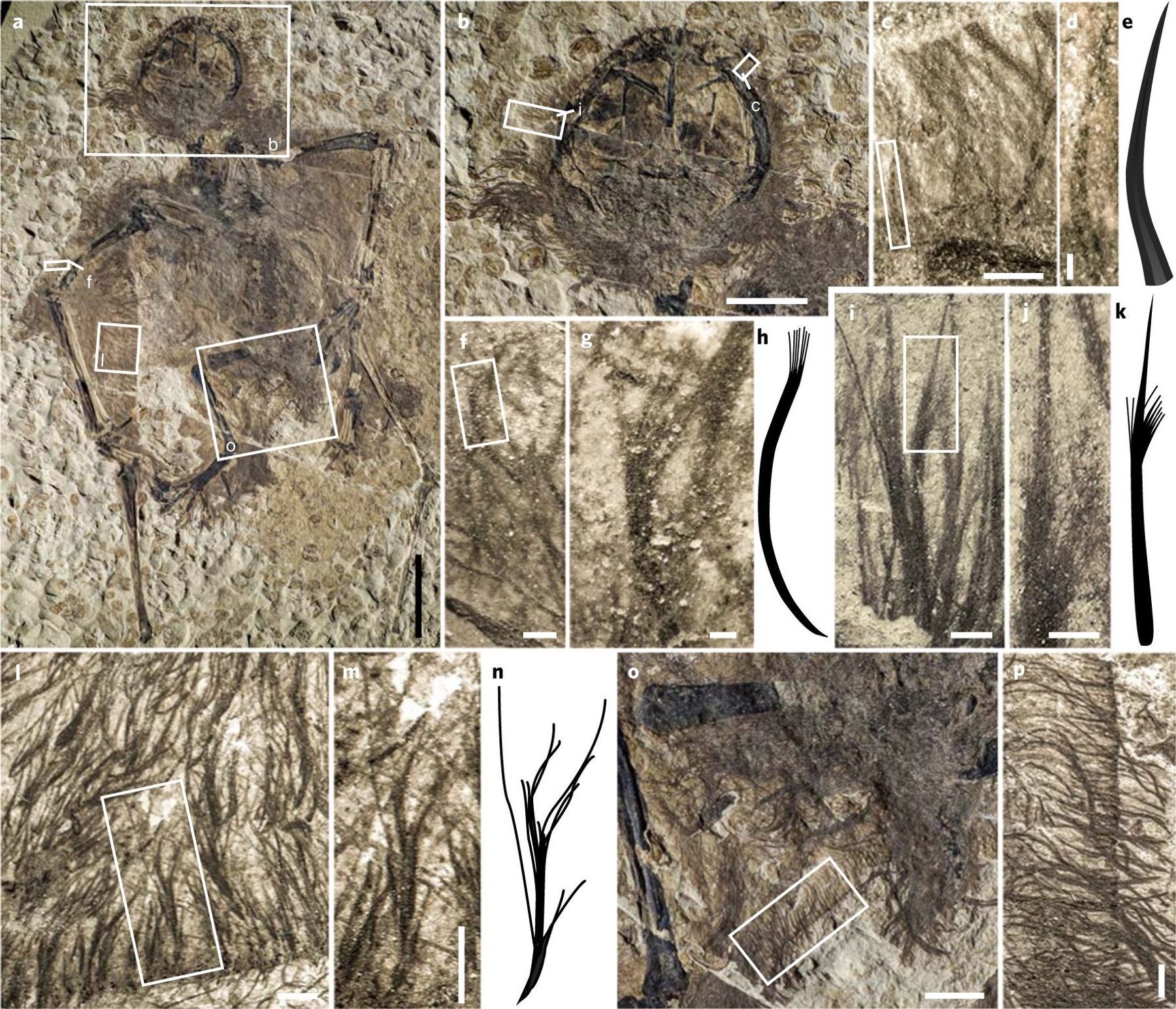 “The thing that is cool is that it bolsters the idea that pterosaurs and dinosaurs are sister taxa, if they are correct in interpreting these structures as a type of feather,” writes paleobiologist David Martill of the University of Plymouth in the UK, in an email.

The specimens described in the paper are very interesting, agrees Chris Bennett, a palaeontologist at Fort Hays State University in Kansas, but in an emailed comment he describes the interpretation of the structures as problematic. “The authors’ characterization of the integumentary structures as ‘feather-like’ is inappropriate and unfortunate,” he writes. Some of the structures look like they could be from fraying or other decomposition, rather than feathers.

Bennett adds that filamentous structures for insulation and sensation are fairly common, from hairy spiders to caterpillars to furry moths. “It seems to me to be premature to use filamentous integumentary structures to support a close phylogenetic relationship between pterosaurs and dinosaurs,” says Bennett.

Benton stands by his conclusion that pterosaurs wore plumage. Asked about the suggestion that the feathers could be wing fibers, he writes in an email, “Actinofibrils occur only in the wing membranes, whereas the structures we describe occur sparsely on the wings, but primarily over the rest of the body.”