To see if the spiky fish shares signaling pathways found in other organisms, scientists scooped up specimens during a mating frenzy on the shores of Japan.

ABOVE: A CT scan of the Japanese grass pufferfish (Takifugu niphobles), displaying its spines and skeletal structure
GARETH FRASER

A single set of genes drives the development of pufferfish spines, zebrafish scales, mouse hair, and chicken feathers, researchers reported July 25 in iScience. The new study, conducted in the Japanese grass pufferfish (Takifugu niphobles), confirms recent findings that the same signaling pathways shape all vertebrate skin appendages but represents the first attempt to demonstrate this in such an obscure species.

“The building blocks of these structures are pretty much conserved across vertebrates,” says coauthor Gareth Fraser, an evolutionary developmental biologist at the University of Florida in Gainesville. “Even these spines from this really odd, derived group of fishes, the pufferfish, still use the same set of genes that makes hair, feathers, fish scales, and shark dermal denticles.”

To watch spine development unfold, Fraser and his colleagues ventured to Japan during the short T. niphobles breeding season. During two months of the summer, adult fish ride the tide ashore, wiggling wildly as they release eggs and sperm onto the sand. The researchers gathered breeding males and females from Arai beach in Kanagawa prefecture and fertilized thousands of their eggs at a local marine station. 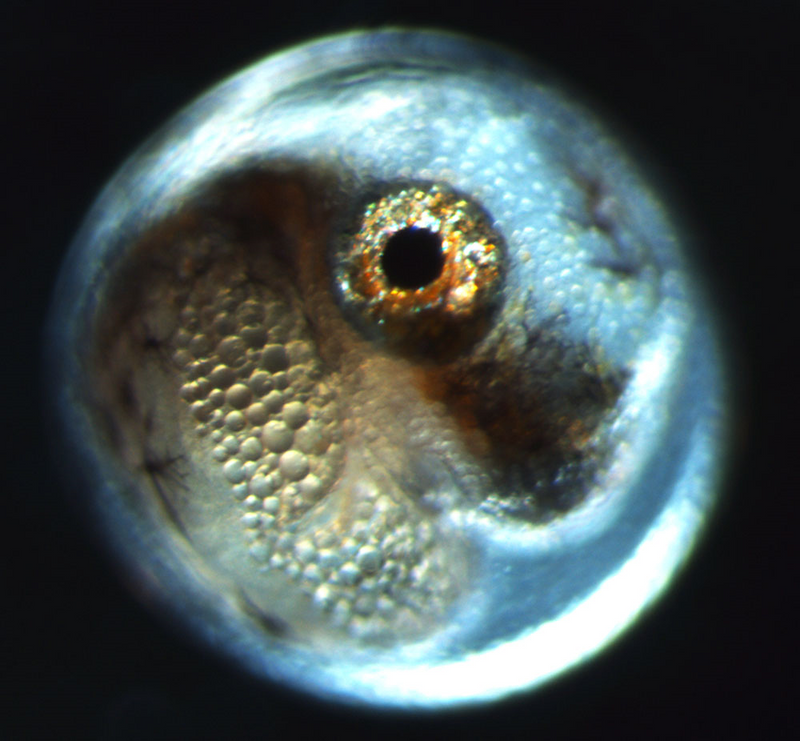 The embryos began to grow spines on their underbellies about 12 days after fertilization, without passing through a scale-like stage. Regardless of how different the final appendages appeared, the researchers predicted they would all be governed by the same genetics, given what has been found to control the development of other animals’ skin accoutrements. Indeed, gene expression analyses revealed that the same suite of signaling pathways seen in feathers, scales, and hairs also drove spine development. The researchers tinkered with these pathways—namely Wnt, Hh, FGF, and BMP—using small-molecule gene inhibition and were able to alter the total number and arrangement of spines in the mutant fish.

The authors also used CRISPR-Cas9 to disrupt the Eda signaling pathway, known to help determine the size, shape, and spacing of skin appendages in various vertebrate species. Eda proved critical to normal pufferfish spine development, and the researchers suggest that modifications to the pathway may have driven the appendage’s evolution.

The pufferfish study confirms, “in a way, unsurprisingly,” that skin appendages are governed by the same molecules in all animals, he says. The next step will be to learn how the conserved network has been tweaked to produce pufferfish spines of varying size and skin coverage. Having now successfully bred pufferfish at the University of Florida, Fraser plans to pursue the research in the coming year.

Although its results may be expected, the pufferfish study signals an exciting shift in developmental biology toward complementing data from common model organisms with that from more exotic creatures, says R. Craig Albertson, an evolutionary developmental biologist at the University of Massachusetts Amherst.

“We take these organisms that are amenable to being reared in high densities and being inbred in the lab to generate the rulebook of genetics and development,” says Albertson, who was not involved in the study. But traditional laboratory animals “just aren’t normal,” he says, so the rules that apply to them don’t necessarily dictate development in all animals. “So then we can take insights from these more obscure organisms and more broadly apply it.”

Although well-known to neuroscience, the Takifugu genus has remained largely untouched by evolutionary developmental biologists, according to Fraser. Conducting standard developmental studies in nonmodel organisms was once considered a mammoth undertaking, says postdoc Andrew Aman, an evolutionary developmental biologist at the University of Virginia in Charlottesville. “But with the advent of inexpensive genome sequencing, transcriptome sequencing, and CRISPR-Cas9 technology, that’s no longer really necessary. And an individual lab like the Fraser lab can construct the tools necessary to make progress in any organism,” says Aman, who was not involved in the study.