Diagnosing neurobiological disorders, such as the autism spectrum disorders, focuses on complex clinical evaluations. But a study published last week (March 6) in eLife shows that an objective measure—how the pupil varies in size while viewing an optical illusion—reveals differences in perceptual styles and correlates with a self-reported score of autistic traits. The findings suggest that tracking fluctuations in pupil size, which is called pupillometry, could be used alongside clinical assessments to help researchers and clinicians understand autism.

“We used to think that the pupil was a simple light reflex or that it just indexed arousal,” says Stefan Van der Stigchel, an attention and perception researcher at Utrecht University in the Netherlands who did not participate in the work. This study shows “how the pupil can be informative of, in this situation, perceptual styles.”

Previous research has shown that people... 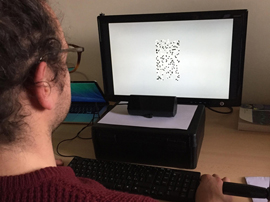 Coauthor Marco Turi completes the visual task while his pupils are monitored.MARCO TURI AND PAOLA BINDAIt’s possible to measure what people pay attention to by having them look at images with both bright and dark areas. Their pupils are slightly larger when they attend to the dark parts and slightly smaller when they attend to the light parts. Burr, Paola Binda of the University of Pisa in Italy, and Marco Turi, a postdoc at the University of Pisa, decided to take advantage of this phenomenon and study how attention, via pupil size, tracks with autistic traits.

Burr and colleagues had 50 college students without neurodevelopmental diagnoses answer the Autism-Spectrum Quotient (AQ) questionnaire. Higher scores on the AQ indicate more autistic traits. Because autism is a spectrum of disorders, these traits extend into the typical population.

While watching the video, the subjects reported with a joystick or arrow keys whether the cylinder appeared to be rotating right or left. The team found that students who focused their attention on only one set of dots had oscillating pupil sizes from shifting between the black and white dots, while the pupils of people who attended globally to both bright and dark aspects had much smaller fluctuations in diameter. The greater the changes in pupil diameter, the results showed, the higher a participant scored on the AQ survey.

It could be an important aid to the diagnosis of these patients because it would be an objective measure that would complement the subjective clinical evaluation.

“I would not have expected such a clear and replicable relationship between just a few verbal questions and the likelihood that these bi-stable objects will shift in a particular way and that will be also reflected in the pupils,” says Bruno Laeng, a psychology researcher at the University of Oslo in Norway who did not participate in the study.

The team wants to start testing people with high-functioning autism spectrum disorders, says Burr. But he adds that the more interesting challenge will be to apply pupillometry to people who are not able to report what they perceive. “We want to devise a version of this test where they don’t have to report anything, where we actually force stimuli to go one way or the other. They can just look at the screen, and we’ll just record.”

“It could be an important aid to the diagnosis of these patients because it would be an objective measure that would complement the subjective clinical evaluation,” says Binda. We’re not claiming that pupillometry will address all the issues of complexity in autism spectrum disorder diagnosis, she adds, “but . . . we need objective measures to help [with] diagnosing any disorder, and in particular the autistic spectrum disorders.”