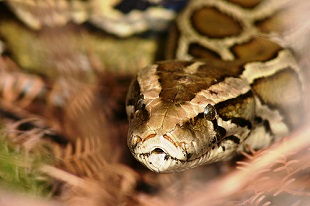 FLICKR, FLORIDA FISH AND WILDLIFE, KEVIN ENGEBurmese pythons may have a homing sense that can guide them over distances as long as 20 miles, according to a study published this week (March 19) in Biology Letters. Python bivittatus, a native of Southeast Asia, is one of largest snakes in the world; individuals can grow to be nearly 20 feet long.

A research team, led by Michael Dorcas of Davidson College, implanted 12 snakes with GPS radiotransmitters. The researchers released half back into same habitat and moved the other half to a more appropriate habitat. When the transplanted snakes returned to their home ranges instead of exploring and adapting to their new habitats, the...

“I suspect that, if pythons can do this, all snakes can do it—rattlesnakes, vipers, the lot,” Stephen Secor, a herpetologist at the University of Alabama who was not involved with the study, told BBC.

Coupled with a recent report that pythons are incredibly difficult to find in the wilds of Florida, the finding is bad news for wildlife officials trying to rid the state of the invasive snakes.