After four mysterious cases of a potentially fatal bacterial infection since March of this year, the US Centers for Disease Control and Prevention is urging clinicians, medical providers, and public health laboratories to be on the lookout for the disease, known as melioidosis. According to the CDC, melioidosis is easily mistaken for other conditions because symptoms vary and the bacterial species responsible, Burkholderia pseudomallei, isn’t considered endemic to the United States.

As transmission nearly always occurs from contact with contaminated materials such as soil, water, food and drink, or personal care products—person-to-person transmission is thought to be exceedingly rare—doctors typically don’t consider melioidosis unless a patient has recently traveled to areas where the microbe is known to persist in the environment. But none of the patients in the four recent cases—which occurred in Georgia, Kansas, Texas and Minnesota—had traveled to melioidosis-endemic areas, leading the CDC to suggest an imported product may be spreading the bacteria. There have been previous reported instances of US melioidosis in nontravelers, including a few in the last fifteen years. 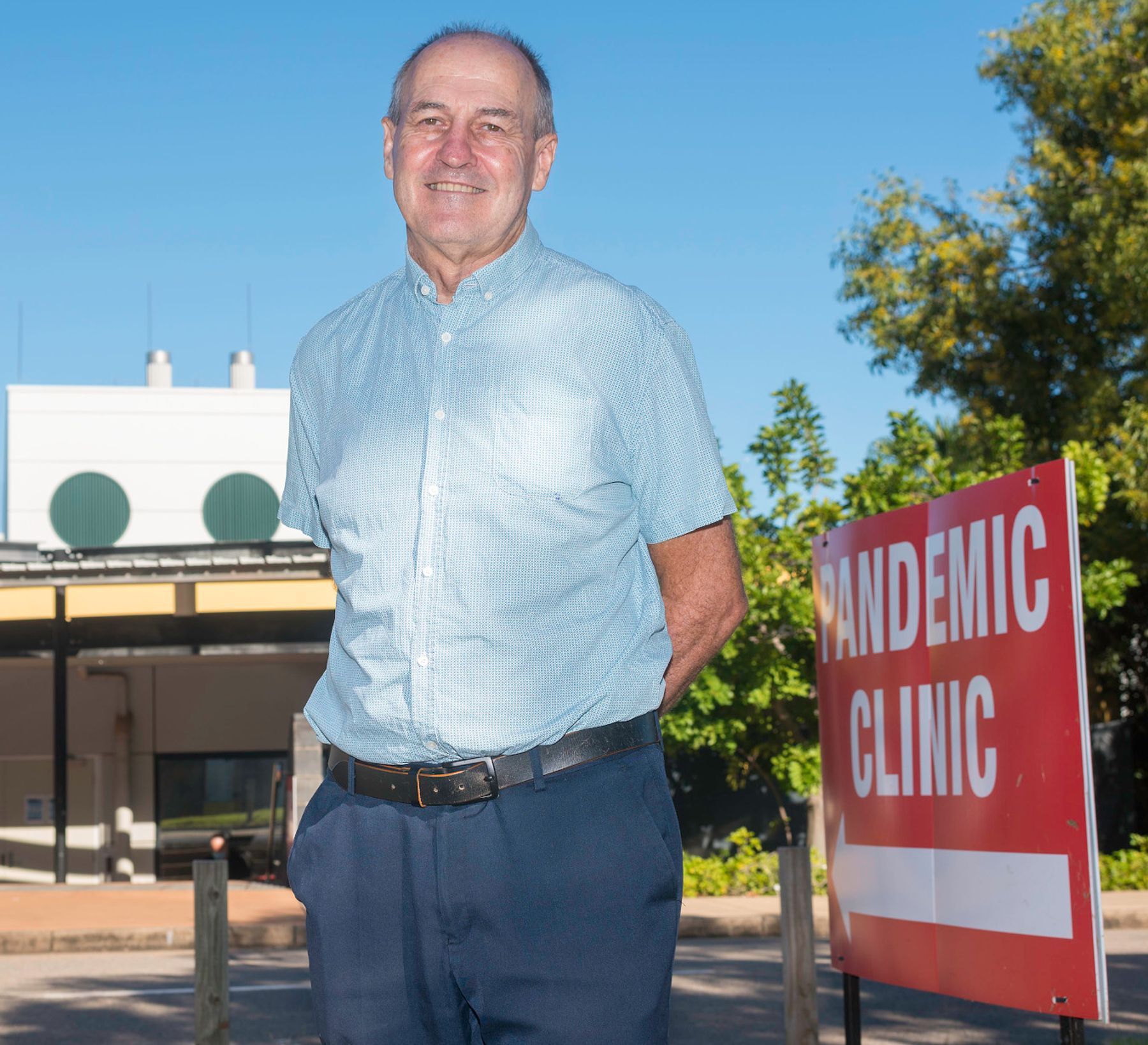 “I know that CDC are on the right path with all the investigations with the state health authorities,” says Bart Currie, a physician-scientist with Menzies School of Health Research in Australia who studies the disease, adding that he would be surprised if the source of the bacteria isn’t identified. However, he notes that additional cases may occur, as the disparate locations suggest the culprit is contamination in a product that is widely distributed. “Until the answer is found, the possibility of further cases is there.”

The Scientist spoke with Currie for more insight into this spate of infections.

The Scientist: What is melioidosis?

Bart Currie: Melioidosis is an infectious disease caused by a bacterium, which lives in soil and surface water in areas where melioidosis is endemic.

TS:  And what are those areas?

BC: The areas where it’s known to be endemic, commonly, are particularly Southeast Asia and Northern Australia, but [also] other parts of Asia, including China and India, and Sri Lanka. . . . What’s happened in the last 20 to 30 years is that the global distribution of the organism Burkholderia pseudomallei has been recognized to be much more than was originally thought, such that it’s been described from Madagascar, and then from [mainland] Africa, and then the most dynamic area of description in the last decade has been from the Americas.

The interesting thing about that is that the global mapping that’s occurred has also predicted areas where it should be but has not yet been described or found in the environment. And of importance to the United States is that the southern US is considered, from the global modeling studies, to be certainly receptive to Burkholderia pseudomallei. And therefore, it can certainly get there and survive there or potentially may already be present. The CDC has been investigating some cases in Texas where it’s thought to potentially be reflecting a local strain, but that has not been confirmed yet—and that’s a whole separate story from this story of what is almost certainly imported bacteria [in the four new cases].

TS:  You say “almost certainly imported.” What makes you say that?

BC: Well, the cases that have occurred in the four states of the United States—those people have never actually left the US, as I understand from the CDC reports. But with molecular genotyping . . . when the CDC have looked at the genomic profile through genetic fingerprinting and compared that with a large global data set of these bacteria, this strain that has been found in these four cases links closely with Southeast Asia or, indeed, probably Asia. In the latest report from the CDC last week, they are suggesting, in fact, possibly South Asia, as opposed to Southeast Asia.

The reason that this sort of makes sense is that this is not the first time that there has been imported melioidosis into the US. Obviously, return travelers can bring it back in if they’re infected overseas. But there have been five other previous published reports where individuals had never left the United States, and it is thought that those five had been infected from bacteria that . . . one way or another entered the United States. For the 1950 and ’71 cases, obviously, the bacteria haven’t survived, so they can’t be genotyped. But the subsequent three preceding this cluster of four cases have all been genotyped, and . . . [for] all three cases, the genotypes have linked on the global genotype data set to strains from Southeast Asia.

These three cases were all circumstantially linked to something being imported into the United States. Having said that, substantial investigation in those three cases, and also around these four cases at the moment, has not actually found what it is, in any of those circumstances, that has come in. But what has come into the US this time must have come into four states or been distributed to the four states from a point in the United States. So it’s a very interesting and baffling situation, which really requires what you call ‘shoe leather epidemiology,’ matching up the histories of what things each of the individual patients may have been exposed to in the days to weeks before they got sick.

TS:  Why is it so hard to figure out that source of the bacteria?

BC: It’s a bit like with food poisoning outbreaks; you’ve got to go and actually make lists of all the different things they’ve been exposed to. But with a foodborne outbreak, you’re only talking about food, so you can quickly figure [it] out.

The . . . range of possibilities here is quite diverse because it could be a food that’s been imported. It could be drinks that have been imported, because this organism survives in water very easily. It could be cleaning products. It could be personal care products. There’ve been outbreaks, for instance, of other related bacteria, but not this particular one, in contaminated toothpaste—I’m not saying that’s what the case is here, but that’s an example. Or it could be plants that are brought in, and certainly with one of the cases that was previously looked at, the main possibility, which was never actually completely found out, was an imported plant or soil around plants that were brought in. . . . One of the other previous cases in the United States was potentially linked to imported reptiles.

It may be that there’s a particular manufacturing facility somewhere in Southeast Asia or Asia where products that are being manufactured for export globally, including the US, are being contaminated. . . . The CDC investigators will need to be looking at what previous medications each of the people may have been exposed to, particularly vials of intravenous solutions for injection, or vials of intravenous fluid. . . . [The bacterium] can actually survive in some common antiseptics.

TS:  How concerned should people in the US be about this?

BC: Without wanting to, in any way, [dictate] what needs to happen with this, there are much bigger issues with COVID in the US, and the same here in Australia.

But having said that, this is something that needs to be solved, because it is related to the movement of organisms around the world with products, and so understanding how it’s coming in will potentially prevent further importations.

The other thing is that of these four cases, two have died. So that’s a mortality of 50 percent.

The organism is hard to identify for those laboratories who haven’t got experience with it, so the CDC have been advising state health laboratories to be on the lookout. What’s been well published in recent years is that a number of the standard automated identification processes or machines for identifying bacteria cultured from blood or cultured from other sites can misidentify Burkholderia pseudomallei. That includes MALDI-TOF [matrix-assisted laser desorption ionization time-of-flight mass spectrometry], which is now increasingly used around the world, and certainly in the US, for identifying bacteria. MALDI-TOF has, on a number of occasions, misidentified Burkholderia pseudomallei as either another Burkholderia species or indeed as a completely unrelated bacterium.

However, labs that are experienced with handling this organism, such as the CDC labs—it’s pretty easy for them to identify it. But for people who’ve never seen it before, they may well misidentify it as something else, and that means a delay in antibiotics that are effective against the organism, because melioidosis is very hard to treat. And the antibiotics you need to use for treating it are limited, because it has a broad intrinsic resistance to commonly used antibiotics.

TS:  Is there anything else that you feel our readers need to know?

BC: Just one thing, as an aside: This is not something that’s only happening in the US.

Here in Australia, where melioidosis is endemic for us, we have a minority strain . . . [that] is clearly not an Australian strain. It’s clearly a strain from Asia, and it was first recognized by us in 2005. Since then, we’ve had over 60 cases in humans and a number of cases in animals, and we still haven’t figured out how it got into Australia. . . . And indeed, in the last couple of years, we’ve recognized two other strains, which we think have been imported from Asia. So even in our endemic area where we understand melioidosis and study it, we’re struggling to figure out how it’s actually getting into to [Australia] from outside the country.

Editor's note: This interview has been edited for brevity.