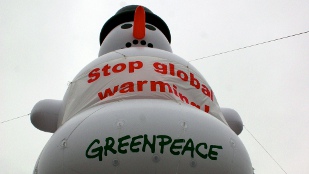 In June, a working group of the Intergovernmental Panel on Climate Change (IPCC) published a report that reviewed options for mitigating climate change that limit greenhouse gas emissions—such as renewable energy technology—and enhance activities that remove greenhouse gases from the atmosphere.

Over a month before the report’s publication, the IPCC highlighted an optimistic scenario for future renewable energy use—that it may comprise 77 percent of the total world energy supply by 2050—in press releases and summary reports issued to policy makers. But when the full report was released last month, it became clear that the scenario was based on data from a study by Greenpeace—a non-profit environmental campaign organization that supports renewable energy as a solution to energy shortages and dependence on foreign oil—and that the IPCC report chapter that included the data had been drafted in part by Greenpeace’s Renewable Energy Director Sven Teske.

The Scientist: What is your concern about the inclusion of Greenpeace campaigner Sven Teske on the IPCC panel?

Mark Lynas: Sven Teske was a lead author within one of the report chapters which gave possibly undue prominence to his own [organization’s] work and his scenario of 80 percent renewables by 2050. The IPCC is in the process of formulating conflict of interest procedures, and they make it clear that it’s the appearance of conflict of interest which matters. It doesn’t have to be proven. I think there is a perceived conflict of interest with having a campaigner with a clear agenda, reviewing their own work, which then becomes highlighted as the lead figure for the entire report.

I’m not suggesting that Greenpeace submitted tainted data; I’m suggesting that the presence of Greenpeace as a campaigning organization within the IPCC, which is supposed to be disinterested and composed of scientists, is problematic.

TS: What do the Greenpeace data show?

ML: It’s a very optimistic scenario for a world where primary energy use decreases massively despite population growth and economic growth up until 2050, and which sees a roll-out of 77 percent renewable power supply by 2050, even in the context of a complete phase-out of nuclear. I would say it’s a highly unrealistic scenario, but that’s a separate concern from whether it was given undue prominence in the IPCC report.

TS: Do you think the outcome of the IPCC’s findings would have been changed if Teske hadn’t been on the panel?

ML: I have no idea. I have no involvement with the IPCC, so it’s impossible to tell from outside. But that’s why it’s so important that there’s no appearance of bias or conflict of interest in these kinds of records.

TS: Are there other panel members who may have a conflict of interest?

ML: It’s been pointed out that there were panel members from industry who potentially also have conflicts of interest. For example, in the chapter on hydro-power, some of the co-authors are involved in companies which build dams. That’s an obvious financial incentive to promote hydro-power. This isn’t just a one-off. That’s why I’m insisting that it needs to be looked at much more seriously by the coordinating lead authors.

TS: Ottmar Edenhofer writes that the inclusion of data from panel members is not an unusual occurrence and shouldn’t be viewed as bias. “For all IPCC assessments, teams of leading experts consider large bodies of literature. These will often include some of their own work, as leading experts in an area will have contributed to the relevant literature.” Do you agree?

ML: That’s why you need a conflict of interest policy. Because there will be occasions where lead authors are such acknowledged experts in their field that they will be put in a position of reviewing some of their own work. So this isn’t just about campaigners or industry, conflict of interest exists for supposedly good-interested sciences as well. If you read Edenhofer’s statement, he does seem to suggest that [this working group] needs a different set of standards [than other IPCC working groups] because they have a broader spectrum of expertise that they need to draw from, which includes campaigners and industry. If [this working group] has a lower [conflict of interest] standard, that would potentially bring the IPCC into disrepute.

TS: What are the consequences of a public perception of bias within the panel?

ML: The challenges that have been made about the rigor and impartiality of climate science in general and other controversies which surrounded the IPCC recently have made it apparent that it’s doubly important for the IPCC to be beyond reproach in how it carries out its work. If we are to move urgently forward with climate change solutions, as I think we should, we need to have a scientific point of reference which is really beyond reasonable challenge.