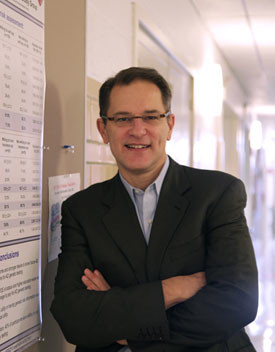 Robert GreenGENOMES2PEOPLEWith a goal of eventually enrolling 480 infants from two Boston-area hospitals—half from well baby nurseries and half from neonatal intensive care units (NICUs)—the researchers behind the BabySeq Project have begun to analyze the first sequenced exomes. BabySeq is the first randomized clinical trial studying the effects of at-birth genome sequencing on children and their families. Parents who consent to have their babies’ genomes sequenced also agree to 18 years of follow-up study.

Enrollment has been a challenge, Robert Green of Brigham and Women’s Hospital reported October 19 at the American Society of Human Genetics (ASHG) meeting, held in Vancouver this week. Only around 7 percent of families the researchers approached have agreed to participate. Families who have declined to participate  have cited logistical and privacy issues, among other concerns.

To date, Green explained at ASHG, the team has only reported to participating families pathogenic or likely...

Following his presentation, Green—along with genetic counselor Shawn Fayer of Brigham and Women’s and Ingrid Holm, an associate professor of pediatrics at Harvard Medical School and Boston Children’s Hospital—addressed reporters’ questions on these early results. What follows are excerpts from that conversation, edited for clarity and space.

The Scientist: You’re collecting lots of exome sequence data. Why did your group decide to only return information related to childhood-onset conditions?

Robert Green: There was a strong conclusion from the IRB, [which] argued that it is most appropriate to return [information related to] childhood-onset conditions. We were starting a study that could be controversial in many ways. . . . We did anticipate having to confront a decision [such as returning BRCA2 result], and now have.

TS: You found this BRCA2 variant and approached the IRB.

RG: There was consistent agreement that it was appropriate to return it . . . and we did.

TS: What was the mother’s response?

RG: I think it’s fair to say she was appreciative.

TS: You’re planning to follow these children for 18 years. What does the follow-up protocol look like? What are you hoping to learn?

Ingrid Holm: Re-querying sequence [data] periodically [for new disease-linked variants]—at this point it’s not built in, but it certainly makes sense because our knowledge of the meaning of variants changes over time.

RG: There’s such an emphasis on big data. And what we’re doing is deliberately small data. . . . That’s the heart of the study. What are we gonna find? How much does it cost? What’s the impact of [sequencing] on the medical system? What’s the impact on the family dynamics? When does it trigger cascade [genetic] testing throughout the rest of the family? How much does that cost? What does it [help us] to discover? Where does it lead us astray? There are so many interesting downstream questions. We won’t have the numbers that some observational studies have, but the strength of the randomized trial methodology is that . . . we can hopefully isolate the impact of the sequencing.