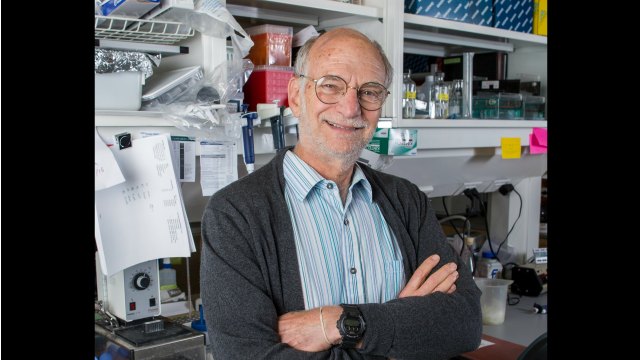 Michael Rosbash of Brandeis University shared the 2017 Nobel Prize in Physiology and Medicine for work on circadian rhythms.SCOTT EISEN/HOWARD HUGHES MEDICAL INSTITUTEToday (October 2), Michael Rosbash, Jeffrey Hall, and Michael Young were awarded the 2017 Nobel Prize in Physiology or Medicine for explaining how organisms synch their behavior and physiology to Earth’s 24-hour spin cycle. Brandeis University’s Rosbash spoke with The Scientist about what inspired the award-winning work and what the biggest challenges are now in understanding circadian rhythms.

The Scientist: How did you become interested in studying genes related to circadian rhythm?

Michael Rosbash: The origin of the interest is a basic understanding of questions like, why your mother has the quirks she does or why your two children come out differently. It is just a natural curiosity about the world around us. The...

I always had an interest in the biological underpinnings of behavior, but as a biochemist or molecular biologist, it always seemed difficult to study. My colleague Jeff Hall here was doing this in fruit flies, and it was through his work that I realized what a fantastic system this was for studying the relationship of genes and behavior, mostly because the phenotype, the measurements of the behavior, are so precise and so remarkably easy and so remarkably faithful. That’s what turned my head.

TS: How has the technology changed from when you were first dissecting the period gene in the 1980s compared to today? How much faster would the work be done today?

MR: Today, it would have been faster, a month or two, instead of two years. . . . The sequencing would have been more informative a decade later because when we sequenced that protein, we still didn’t know much. There weren’t that many proteins in the database. There weren’t very many genes that had been sequenced, so when you are looking for relatives with known functions, as a clue for what the gene was doing, we were so stuck. It took us a few years to figure out what was going on.

There’s a very profound question that remains unanswered in circadian rhythms, which is, how do they remain temperature-invariant? Nobody has a good answer to that yet.

TS: Did you see the Nobel coming or was it a complete surprise?

MR: It was a complete surprise. But it was always a possibility, it seemed to me, with the first prize the three of us won in 2009. The Gruber Prize started a little series of prizes. Not that the prizes were little, I mean a small number of prizes, and that seemed like it might culminate in something bigger. But then things have been quiet for four or five years, and so I think I suspected our time had passed.

TS: What scientific questions would you like to see answered or that you are working to answer?

MR: There’s a very profound question that remains unanswered in circadian rhythms, which is, how do they remain temperature-invariant? Why doesn’t the timing change with temperature? Nobody has a good answer to that yet, although people are making progress. The second is sleep. Sleep is a bedfellow of circadian rhythms. Forgive the expression. Nobody really knows why we sleep. There are hypotheses but there’s no agreed-upon principle, and so I think the function of sleep is a big challenge. We could call it a brain-behavior problem or brain-function problem. Those are the two big challenges related to circadian rhythms.

TS: What do you think has been your most important achievement or contribution in science?

MR: I think it isn’t so much the discovery of the circadian clock genes but the mechanistic underpinning, the fact that this transcriptional feedback loop is intimately involved in how the brain keeps time, and I think the fact—which is only partly my discovery, it’s our discovery—that the circadian clock controls so much of animal physiology. You name it, the clock is orchestrating it.

TS: What do you wish the general public would appreciate or take away from the press coverage of the Nobel Prize being awarded for the discovery of circadian rhythm genes?

MR: The importance of basic research, the importance of this little fruit fly and how it is really linked to human sleep cycles, to human sleep disorders. . . . How really important, ground-breaking discoveries and things that link to human health and disease come from studies that occasionally politicians make fun of.