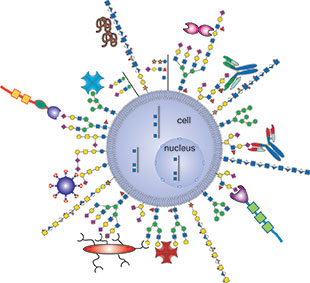 RICHARD CUMMINGSGlycans are part of an elaborate communication system vital for cellular recognition, cell-cell interactions, protein transport, immune defense, and more. These three-dimensional sugar structures attached to most proteins encode a vast amount of information that researchers are just beginning to tap (See “Getting Your Sugar Fix,” The Scientist, April 2015). “With glycans, there are several levels of information,” says Carlito Lebrilla, a chemist at the University of California, Davis: the number of positions carrying a glycan, the location of each of those glycosites, and the chemical composition and branching structure of each glycan. Despite being the most common posttranslational modification, the complexity of glycosylation has left glycobiology lagging behind other fields, such as protein sequence analysis and genomics. But that’s changing, as researchers identify glycosylation as an important player in many diseases, including cancer. A handful of aberrant glycoproteins are already used as...

Problem: One easy and widely used way to compare glycan regulation in healthy and diseased states is to enzymatically release all the glycans in a given sample from their proteins and analyze them in bulk. Researchers use stable-isotope labeling mass spectrometry to identify up- or downregulation of certain glycans between samples. Glycans from one sample receive a light isotope label, such as C12, while a heavier carbon isotope such as C13 is attached in the other sample, and the relative abundance of each ion reveals the relative abundances of the labelled glycans. One common way to attach these isotopes to free glycans is to tack on stable-isotope-labelled methyl groups using a method called permethylation. The data generated through this technique are highly variable, however, because it methylates a variable number of a given glycan’s hydroxyl groups. “It doesn’t take much to make permethylation difficult for quantification,” says Muddiman. “The more analytical variability you have, the less ability you have to pull out a subtle biological signature.”

Solution: In 2013, Muddiman and his colleagues developed a workflow to improve the reproducibility and sensitivity of glycan quantitation using liquid chromatography-mass spectrometry (J Am Soc Mass Spectrom, 24:1376-84, 2013). Their technique, called “individuality normalization when labeling with isotopic glycan hydrazide tags” (INLIGHT), labels glycans with a one-to-one stoichiometry, reducing variability and improving the sensitivity of the quantitative analysis. The hydrophobic tag also makes the glycans easier to ionize, improving detection by mass spectrometry. In their study, the team published code which uses multivariate modeling to identify individual glycans with significantly different abundances between samples. “Anybody else can just take that code and modify it for their study,” says Muddiman.

Later, his group used INLIGHT to identify eleven plasma glycans that were altered in 82 women with ovarian cancer compared to case controls (J Proteome Res, 14:4394-401, 2015). The INLIGHT method allowed them to detect changes in glycan abundance as low as 17 percent. They are now using the strategy to analyze samples from hens that spontaneously develop ovarian cancer in search of glycans that change in abundance over the course of disease.

The INLIGHT reagents are commercially available from Cambridge Isotope Laboratories ($950 per kit, about 25 experiments). Muddiman’s team is now adjusting the reagents’ polarity to increase their mass spectrometry signal. “This tag has been tremendous for us, but we’re scientists, so we always want to make things better,” he says.

Glycans in their natural habitats 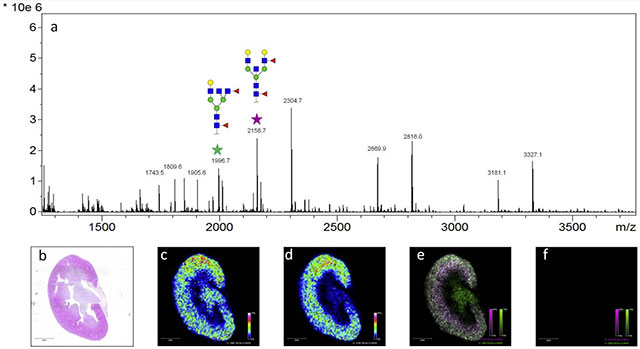 MAPPING IT OUT: Using matrix-assisted laser desorption/ionization imaging mass spectrometry (MALDI IMS), Anand Mehta and his colleagues visualized two glycans known to be present in mouse kidneys (shown on above spectral graph). The researchers freed the glycans by exposing kidneys to a recombinant version of the enzyme PNGaseF (C-E). A negative control (F) showed that the glycans were not detectable unless exposed to the enzyme. Heat maps (C and D) showed the abundance of each glycan and a color overlay (E) in which one glycan is green and one is purple demonstrated their distributions on the outer edge or center of the tissue section.PLOS ONE, doi:10.1371/journal.pone.0106255, 2014

Project: To identify changes in protein glycosylation that can serve as early biomarkers of liver cancer.

Problem: Bulk analysis of glycans from serum or homogenized tissue doesn’t differentiate diseased tissue from nearby healthy tissue. When Mehta and his colleagues analyzed glycan profiles from homogenized hepatocellular tumor tissue and adjacent healthy tissue, they saw no detectable difference. So he and Drake set out to map glycans within intact formalin-fixed or frozen tissue samples using matrix-assisted laser desorption/ionization imaging mass spectrometry (MALDI IMS). The problem, he says, was enzymatically releasing glycans without destroying the tissue—or breaking the bank. Glycans are typically released from tissue by applying an enzyme called peptide N-glycosidase F (PNGase F), but dousing the tissue in the required amount was too expensive. “The lack of an [affordable] enzyme was one of the reasons why no one had done it,” says Mehta.

Solution: Mehta and Drake designed a lower-cost, recombinant version of PNGase F, which is now commercially available from Bulldog Bio ($250 per 100 microliters), bringing the cost of the process down threefold to $1 per tissue section. (Anal Chem, 85:9799-806, 2013; PLOS ONE, doi:10.1371/journal.pone.0106255, 2014). The MALDI IMS process itself is similar to proteomic analysis, Mehta says. The researchers identified glycans by mass or by on-tissue collision-induced dissociation and created heat maps that revealed the relative abundances of glycans in mouse brain and human kidney tissue. When they applied the method to hepatocellular carcinoma samples, the differences between tumors and adjacent tissue were striking, says Mehta (Biomolecules, 5:2554-72, 2015).

SEEING IS BELIEVING: After releasing glycans with a novel recombinant enzyme, Anand Mehta and his colleagues used MALDIIMS to visualize glycans in normal and in liver cancer tissue samples. Glycans were identified by their mass to charge ratios (m/z) and heat maps portrayed relative abundances of each one (A and B). Levels of two glycans were also compared by assigning colors to indidual glycans (red for the glycan in A and green for the glycan in B) and overlaying their signals (C).BIOMOLECULES, 5:2554-72, 2015 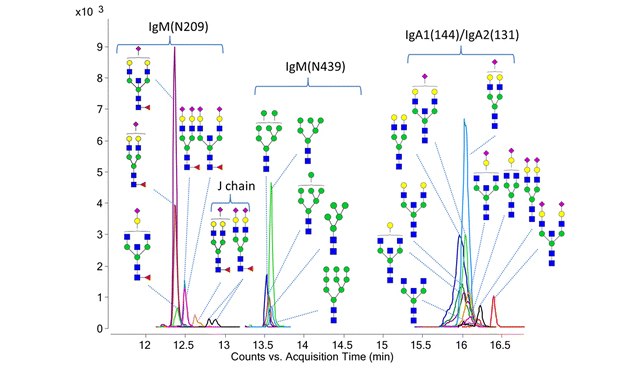 Project: To characterize glycosylation of serum and breast milk proteins from healthy and diseased individuals.

Problem: Quantitation of free glycans by definition leaves out information about the levels of proteins formerly attached to those glycans. Usually, Lebrilla says, one form of information is sacrificed for another. For example, you can determine detailed branching structures of individual free glycans or how many glycan binding sites on a protein are occupied, but generally not both.

Solution: Lebrilla set out to come up with a way to quantitate glycans at specific sites on glycoproteins and distinguish changes in glycan levels from changes in protein levels. Members of Lebrilla’s lab spend much of their time systematically mapping out glycosylation sites on common serum and breast milk proteins. Having such maps made it possible to use a type of mass spectrometry called multiple reaction monitoring (MRM) to compare abundances of site-specific glycans between samples. MRM uses a triple-quadrupole mass spectrometer, which allowed Lebrilla’s team to home in on an ion species of interest and set the parameters to optimize detection of that species. Also, they used electrospray ionization to increase the charge on trypsin-digested peptides, which makes them fit within the narrow mass detection range of the triple-quadrupole instrument. Because MRM allowed them to select which ions to measure, they could quantify samples directly from serum, which allowed them to skip the protein enrichment step normally required. “As long as your sensitivity is good enough, it doesn’t matter what else is there,” says Lebrilla.

Putting it all together 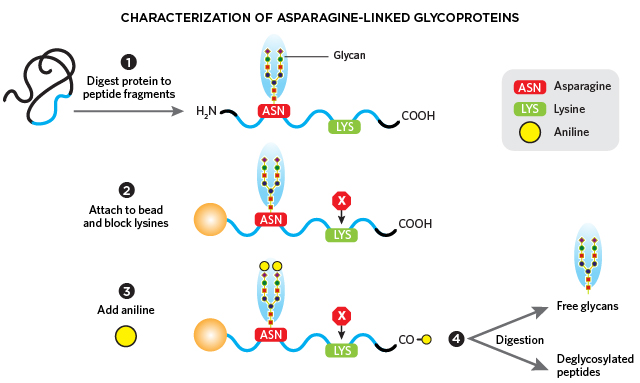 BEAD-BASED SEPARATION: Hui Zhang and her colleagues developed solid phase extraction of asparagine-linked glycans and glycosite-containing peptides (NGAG) to quantitate glycans and glycoproteins from complex samples simultaneously. They attached digested glycopeptides to hydrazide beads (2) and used aniline groups to “protect” glycans and the exposed carboxy termini of the proteins (3). Aniline also blocks the carboxyl groups on aspartic acid and glutamic acid (not shown). Peptides remain attached to the beads after glycans are released (4), allowing the two to be separated by centrifugation.

Problem: Fifteen years ago, Zhang developed a technique called solid-phase extraction for quantitating glycoproteins and identifying their glycan binding sites, but only after all the glycans had been removed. This limitation still applies to most of the field: a lab like Lebrilla’s may study intact glycopeptides after the glycosites have been mapped, but for the most part, labs focus on either freed glycans or empty glycosites on proteins. “We tried to integrate all of these things into a single pipeline,” she says.

Solution: Zhang and her colleagues reworked the solid-phase extraction method so that they could collect information about glycans, glycoproteins, and glycosites all at once. (Nat Biotechnol, 34:84-88, 2016). The method, which they call solid-phase extraction of N-linked glycans and glycosite-containing peptides (NGAG), starts with attaching digested glycopeptides to hydrazide beads and stabilizing the peptides and the bound glycans by covering each carboxy group and each glycan with a chemical compound called aniline. Because the peptides are attached to the beads, the glycans can easily be cleaved off and separated by centrifugation in 96-well plates. Removal of the glycan reveals an aspartic acid where the glycan was attached, and since all of the other aspartic acids are hidden by aniline groups, it’s easy to pinpoint where the glycan chains/oligosaccharides had been attached. The peptides are then released from the beads using an enzyme that specifically cuts at the exposed aspartic acid.

After separation, the released glycans and glycosite-identified peptides are analyzed by tandem mass spectrometry. Zhang’s team used this method to build a database with all potential glycan-glycopeptide combinations in a sample from an ovarian cancer cell line. They also developed a program called GPQuest, available on Zhang’s website, biomarkercenter.org, which matches identified glycans to their protein binding sites.

Zhang’s team is now using NGAG to do glycoproteomics on serum and to identify biomarkers for prostate cancer. She also intends to streamline the method into a ready-to-use kit.