ABOVE: Fluorescently labeled amyloid-β (green) is cleared from the mouse eye along the veins (blue) within the optic nerve.
WANG ET AL.

Instead of a traditional lymphatic system, the brain harbors a so-called glymphatic system, a network of tunnels surrounding arteries and veins through which fluid enters and waste products drain from the brain. In a study published March 25 in Science Translational Medicine, researchers show that the rodent eye also has a glymphatic system that takes out the trash through spaces surrounding the veins within the optic nerve.

They also found that this system may be compromised in glaucoma and is capable of clearing amyloid-β, the build up of which has been implicated in the development of Alzheimer’s disease, glaucoma, and age-related macular degeneration.

As Wang’s project was getting underway, Nedergaard met Lu Chen, a neuroscientist at the University of California, Berkeley, at a meeting. Chen’s group had done previous research on ocular lymphatics that focused on the front of the eye.  There, the majority of the aqueous humor—the fluid that fills the chamber between the cornea and the lens—drains from the eye to the surrounding vasculature through a circular lymph-like vessel called Schlemm’s canal. This helps regulate intraocular pressure. Chen tells The Scientist that she and Nedergaard decided to collaborate to connect the knowledge about the front of the eye with their questions about the back of the eye.

Because Nedergaard’s group showed in their 2012 study that the brain’s glymphatic system was capable of clearing amyloid-β, they used that molecule to investigate the existence of an ocular glymphatic system. They injected fluorescently tagged human amyloid-β into the vitreous humor, the fluid that fills the space between the lens and the retina, in mice. The protein left the eye along expected routes through front of the eye, but also moved into the spaces surrounding the veins within the optic nerve. From there, the tagged protein ended up in what looked like traditional lymphatic vessels in the membranes supporting the optic nerve and eventually in the animals’ lymph nodes. The route is similar to that taken by amyloid-β when it is cleared by the glymphatic system of the brain in mice.

The researchers found that the constriction of the pupil in response to light in both mice and rats increased glymphatic clearance from the eye. They also showed that the pressure in the eye, which is higher than that in the cranium, is necessary to drive the drainage through the ocular glymphatic system. Because of this, they hypothesized that glymphatic clearance might also be disrupted in glaucoma, a disease that typically involves increased intraocular pressure.

The research team determined that there was more amyloid-β clearance from the eyes of two different mouse models of glaucoma than from age-matched control mice. But the increased drainage did not seem to be caused by changes in intraocular pressure. Instead, excessive outflow was actually leakage into the spaces between axons in the optic nerve, not into the glymphatic system, that was related to a breakdown in the barrier between the eye and the optic nerve. The researchers hypothesized that this barrier normally diverts fluid, facilitating solute transport along the optic nerve’s veins, a process that may fall apart in a diseased eye.

“This represents only the starting point for further investigations on the impact of the ocular glymphatic system on the pathogenesis of several ocular diseases,” Peter Wostyn, a physician and researcher at Psychiatrisch Centrum Sint-Amandus in Belgium who did not participate in the study, writes in an email to The Scientist.

“It’s the first time anyone has really shown the ocular glymphatic system to be . . . an additional route of metabolite clearance in the eye and relevant to amyloid-β,” says Maya Koronyo-Hamaoui, a neuroscientist at Cedars-Sinai Medical Center who was not involved in the work. Her group has shown that people with Alzheimer’s disease have amyloid-β deposits in the retina and associated vasculature. It’s possible that glymphatic impairment is playing a role in the eyes of these patients, she says, adding that the parallels between the waste clearance system in the brain and this ocular system are exciting.

The eye is “a simplified version of the central nervous system,” Nedergaard says. “One of our hopes is to take this knowledge and move it back to the brain.” 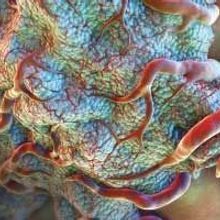