A study has sparked controversy by suggesting that cells made using a popular lab protocol have been misidentified, with potentially serious repercussions for brain research. Critics say the significance of the findings has been overstated.

A well-known in vitro model of the blood-brain barrier that is widely used in studies of neurodegenerative diseases and in preclinical research is made from the wrong kind of cells, according to claims made in a PNAS paper this month (February 4).

The authors of the paper, which has fueled debate in the BBB research community since it was first posted as a preprint on bioRxiv in 2019, say that the findings raise serious questions about the value of the model in ongoing neuroscience and drug studies. Other researchers, including the designers of the protocol, tell The Scientist that the paper’s a useful contribution to the field—although they defend the protocol’s role in advancing BBB research over the years.

David Begley, who leads a BBB group at King’s College London and was not involved in the paper or the design of the protocol, says he thinks the PNAS study contains a lot of good data and highlights the need for researchers to evaluate their models’ limitations. “To make an absolutely perfect in vitro model of the in vivo blood-brain barrier I think is going to be very, very difficult, if not impossible,” says Begley, who doesn’t use the protocol in his own work. “It’s understanding your in vitro models that is critically important—what they will do, what they won’t do.”

The BBB endothelium acts as a semipermeable wall between blood vessels in the brain and the central nervous system. Drugs given systemically to treat brain disorders need to pass through this wall to have their intended effect, making BBB models a critical part of many drug development programs.

The protocol in question was first described by University of Wisconsin (UW)–Madison researchers Ethan Lippmann, Samira Azarin, Sean Palecek, Eric Shusta, and colleagues in Nature Biotechnology in 2012. The method involves treating hPSCs in vitro to encourage them to differentiate into cells that exhibit many of the properties of the BBB, including electrical resistance and impermeability to various molecules.

These reprogrammed cells, which Lippmann and colleagues termed hPSC-derived brain microvascular endothelial cells (BMECs), could be made quickly and in large quantities, and offered an alternative to animal models and more-cumbersome in vitro approaches in use at the time. The protocol and its many derivatives have since been widely adopted by both academic and industry scientists.

If your aim is to target the brain, you need expression of those transporters. They’re not there.

Raphaël Lis, a stem cell researcher at Weill Cornell Medicine and a coauthor on the PNAS paper, says that he gave research associate Tyler Lu the task of working with the protocol when Lu joined the lab several years ago, thinking they might start working on BBB models.

Using bulk and single-cell RNA sequencing to analyze the resulting cells, Lis says, the team was surprised to find that the cells lacked many of the typical characteristics of endothelium, while possessing other properties usually seen in epithelium, a type of cell layer that sits around internal organs and forms the outermost layer of skin.

In analyses described in the team’s paper, Lu, Lis, and Weill Cornell colleague David Redmond determined that the hPSC-derived cells didn’t express several key endothelium-associated genes, some of which encode membrane transport proteins that may be critical in determining which molecules can pass through the BBB. “These cells were completely misidentified” in earlier research, says Lis. “If your aim is to target the brain . . . you need expression of those transporters. They’re not there.”

Lu notes that further experiments indicated that the hPSC-derived cells don’t react the way endothelial cells should to certain stimuli, such as inflammatory signaling molecules—a finding with repercussions for disease research based on these models. “To put it in layman’s terms,” Lu says, “it’s as if we’re testing drugs meant for the brain on the skin or on the intestine.”

The paper includes some steps designed to improve the protocol, specifically, by adding transcription factors to make the cells more endothelial-like. These steps have the undesired effect of disrupting some other BBB properties, such as electrical resistance, but Lis says he thinks it’s a substantial improvement on the epithelial-like cells being used currently. “It’s the first stage of a correction,” he says, adding that the team is now working to improve its own version of the model. “I’d rather have an endothelial cell to test things than an epithelial layer.”

The team’s findings were replicated by Dritan Agalliu of Columbia University Irving Medical School and colleagues, who are also authors on the PNAS paper. Lis says that his group has since been contacted by several biotech companies about the work, although he declined to name them. 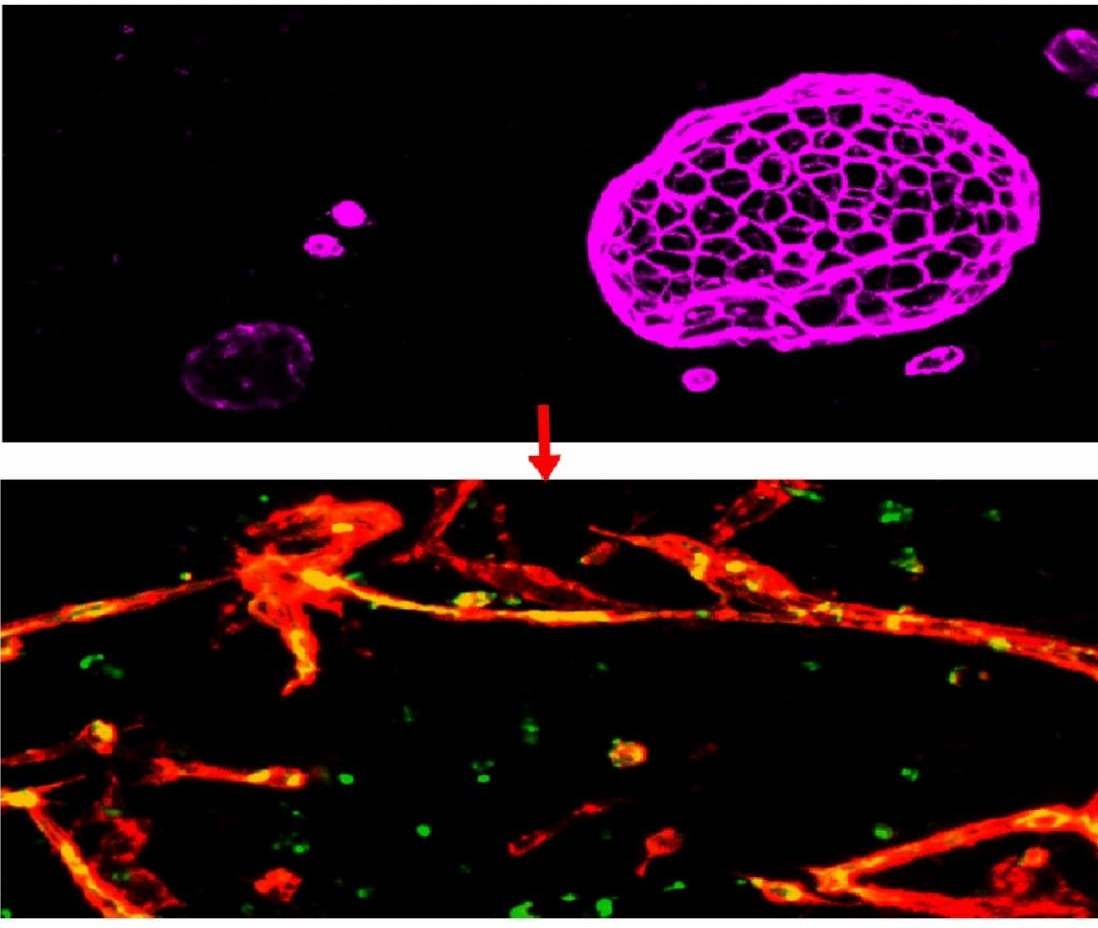 Researchers at Weill Cornell Medicine report that cells created with a popular lab protocol formed epithelial-type structures rather than endothelial ones (above, epithelial cell marker EPCAM in purple). Overexpressing certain transcription factors pushed the cells into a more endothelial-like state (below, endothelial cell markers VE-Cad and PECAM1 in red and green, respectively).
COURTESY OF LIS LAB

Acknowledged limitations of the UW protocol

Speaking to The Scientist, UW’s Palecek and Shusta, who hold several patents on the protocol, say that the Weill Cornell team’s thorough analysis of the hPSC-derived cells is useful, but dispute some of the assertions made by the authors. For one thing, “we and others never claimed that these were bona fide, completely identical to in vivo endothelial cells,” says Palecek. “There are multiple models of the blood-brain barrier out there, and none of them is an exact replication of the in vivo blood-brain barrier.”

Shusta adds that the UW team’s work has been replicated in many other labs—showing both that the cells produce endothelial protein markers and that they exhibit BBB properties considered important in drug delivery and disease research. With Palecek and others, he also recently published a modified protocol to create cells for use in research on the BBB’s interactions with the immune system.

Shusta highlights a commentary from last October that he coauthored with Palecek, Lippmann, and Azarin, in which the team addresses the Lis team’s bioRxiv preprint as well as a couple of other recent studies showing some epithelium-like gene expression in the hPSC-derived cells. The commentary proposes from now on calling the cells “hPSC-derived BMEC-like cells” (emphasis theirs).

As for possible implications of the findings for industry research, Shusta says, “I think it’s dangerous to suggest that a pharmaceutical company or a biotech company would use one model exclusively for drug development and design. . . . It’s one of a battery of tests.” (Biogen, one of the companies that has used the technology, declined a request for comment.)

Johns Hopkins University’s Peter Searson, who has worked with the protocol but is not involved in either team’s work, says it’s worth remembering that the protocol represented a vast improvement on other approaches available a decade ago, when the most frequently used models of the BBB contained MDCK (Madin-Darby canine kidney) cells, which are “epithelial cells from a dog.”

Toward better in vitro models

Searson says that, while he agrees with the objective of characterizing gene expression in these models, he thinks that the Weill Cornell team has omitted important context in their paper. Rather than being a demonstration that the Lippmann protocol isn’t useful, he says, the paper is “part of the ongoing scientific process.”

Researchers who spoke to The Scientist say that the debate, some of it heated, has been going on for several years now. Lis says that early on in their project, he and his colleagues offered to collaborate with Shusta’s group to evaluate the protocol, but that their offer was rebuffed. Shusta says that his team also tried, unsuccessfully, to collaborate with the Weill Cornell researchers.

Lis, Lu, and Redmond tell The Scientist that they think proper evaluations of the protocol have been hindered by BBB researchers’ reluctance to challenge well-established methods, and by the millions of dollars that have been invested in work based on the protocol over the years. “A lot of people . . . after the first couple of big papers [were] published, they stopped scrutinizing the characteristics of these cells too much,” Lu says.

Anna Herland, who works on in vitro neural models at the KTH Royal Institute of Technology and the Karolinska Institute in Sweden and who collaborated with Shusta’s team a few years ago, says that there is a certain dogma in the field when it comes to methodology. Researchers often struggle to justify developing new and improved BBB models to funders and institutions—something she says she hopes might change following the Weill Cornell team’s study and the ensuing discussion about models’ limitations.

“We need to improve our in vitro models,” Herland says. In her view, the one developed by Lippmann and colleagues is still “one of the better models,” she adds, but the PNAS paper is an important reminder that researchers have to fully characterize and understand what they’re working with. Scientists reprogramming stem cells should ask themselves, “what are we getting, and what are we using it for?” she says. “I like that we’re bringing up this discussion more and more.”