Sounds with a frequency of 40 hertz and lights that flicker at the same rate stimulate a pattern of brain activity known as gamma waves, which are associated with excitement or concentration and typically have a frequency of 40 hertz as well, though can range from 25 to 100 hertz. Exposing mice with signs of Alzheimer’s disease to an hour of such stimuli every day for a week somehow helped clear their brains of disease-related amyloid-β plaques, reduced levels of tau protein, and improved the animals’ performance on cognitive tasks, according to a study published yesterday (March 14) in Cell.

“That’s a very exciting finding, that it can actually affect cognition,” Tara Tracy, a neuroscientist at the Buck Institute for Research on Aging who did not participate in the research, tells Science News.

Previous research has demonstrated that disruption to gamma waves in the brain may contribute to the development of Alzheimer’s, and that promoting such brain activity could be a potential avenue for treatment. In 2016, neuroscientist Li-Huei Tsai of MIT’s Picower Institute for Learning and Memory and colleagues found that lights flickering 40 times per second elicited gamma waves in the brains of mice, and that this reduced amyloid-β in the visual areas of the brain.

In the new work, Tsai and colleagues found that sounds humming at 40 hertz have a similar effect and extended the clearing of amyloid-β plaques to the hippocampus, a brain region that is affected in Alzheimer’s. The researchers also noticed increased activity of immune cells called microglia, which digest cellular debris including plaques, and an expansion of blood vessels in the mice’s brains, likely aiding in the remove of amyloid-β and tau proteins.

After a week of hearing an hour of such clicks each day, the animals were more quickly able to find an underwater platform and recognize previously seen objects, compared with mice that had heard randomly spaced clicks.

“The effects on cognitive function are pretty big,” Walter Koroshetz, director of the National Institute of Neurological Disorders and Stroke (which funds some of Tsai’s work), tells The New York Times. “[It’s] definitely something that I don’t think anybody could have predicted.”

Using 40-hertz stimulation of both light and sound yielded even better results, with reductions in amyloid-β plaques also apparent in the prefrontal cortex and even greater immune activity, with microglia congregating around the amyloid plaques, Tsai tells Science News.

It’s still unclear how the sensory stimulation and the resulting gamma waves have all of these effects, but so far the treatment has not led to any noticeable side effects. “I think it’s an absolutely fascinating paper to be honest,” Shannon Macauley, a neuroscientist at Wake Forest School of Medicine who was not involved in this work, tells Scientific American. “It’s a very provocative idea. It’s noninvasive and easy and low cost, potentially, so if it were to come to fruition in humans—that’s fabulous.” 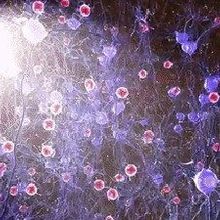