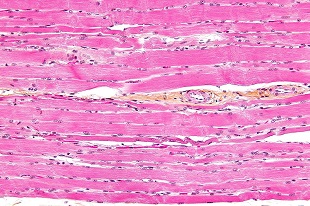 WIKIMEDIA, NEPHRONResearchers have refined a method for regenerating large amounts of muscle lost after injury using material from pig bladders, according to a study published today (April 30) in Science Translational Medicine. A team from the University of Pittsburgh, led by Stephen Badylak, implanted extracelluar matrix, denuded of cells, from the lining of pig bladders, first into mice and eventually into five male patients.

“It’s a good correlation of a treatment of a muscle volumetric defect—in people—with an effort to understand the actual effect on muscle repair that’s occurring,” said Jason Pomerantz, who focuses on tissue regeneration at the University of California, San Francisco, but was not involved in the study.

The male patients all had traumatic muscle injuries—three from military incidents, two from skiing accidents—large enough to be classified as volumetric muscle loss. Muscle tissue is adept at repairing itself, but if a large enough chunk...

But pig bladder lining has long been used in human reconstructive surgeries. It is often used as a passive supportive material in repairs of herniated abdominal walls, breast reconstruction, and other applications. So the Pittsburgh researchers decided to test the substrate. The team removed all the cells from the bladder lining, leaving behind only an extracellular protein matrix. Badylak noted that the most immunogenic molecules are part of cellular membranes and by removing all the cellular material—the most likely reason for a patient’s body to reject an implant—the risk of rejection decreased.

With muscle-regenerating scaffolds in hand, the researchers first conducted preclinical trials in mice that had sections of their quadriceps removed. Two weeks after implantation, the researchers noticed that perivascular stem cells moved out of their usual niche near blood vessels and into the implanted extracellular matrix, which was degrading over time. They also saw signs of muscle regeneration up to six months post-implantation. The regenerated muscle in treated mice was eventually innervated and vascularized. In untreated mice, perivascular stem cells rarely left their niches and there was no evidence of muscle repair at the six-month mark.

“These degraded materials, these peptides that are released, serve as a homing device for the body's own stem cells [which] are recruited into the site of injury and then are available to differentiate into a site-appropriate of tissue”, Badylak said.

The team then moved on to clinical trials, testing its approach on patients who had all had at least six months of physical therapy without any signs of progress. Each man had been injured between 13 months and seven years before the surgeries and had lost most—58 percent to 90 percent—of the muscle of interest. The patients underwent rigorous physical therapy for 12 weeks to 16 weeks. When they plateaued in their progress, the researchers removed the built-up scar tissue and implanted the pig bladder extracellular matrix. Within a few days of surgery, the patients were put back on a physical therapy regimen, which they continued for up to 25 weeks. Clinicians measured their muscle growth using CT scans and MRIs, as well as biopsies. All the patients experienced muscle regrowth and improved abilities carrying out day-to-day tasks. Three of the five patients met all the requirements the researchers had set for successful surgeries. The two remaining patients did improve in most areas of function, but fell short of the cut-off.

The researchers had previously shown that lack of mechanistic stress on the surgery site leads to less muscle regeneration.

“The sheer stress and stretch applied to these cells release what we call paracrine factors, which means the cells talk to each other, and recruit progenitor cells to that area, and kind of turn them on,” said study coauthor Brian Sicari.

“It’s obviously disappointing they weren’t able to see a consistent improvement, but expected considering the conditions” of the small clinical trial, said Dawn Cornelison from the University of Missouri, who was not involved in the research. Cornelison expressed interest in whether the technique could be readily reproduced in the lab to address basic research questions about the cellular mechanisms that underlie the recoveries.

The researchers are now continuing to perform case studies of patients with volumetric muscle loss and trying to better understand the cellular mechanisms behind this process.