Contrary to what you likely learned in school, ferrying oxygen isn’t the only function of red blood cells. In a study published today (October 20) in Science Translational Medicine, researchers show that these cells, the most abundant in circulation, also alert the immune system to the presence of bacteria, parasites, and circulating cell-free mitochondrial DNA, which can signify severe disease, such as sepsis or pneumonia. This pathogen-sensing role comes at a cost, however: red blood cells (RBCs) that cart around snippets of DNA are killed, likely contributing to inflammation-associated anemia.

When Nilam Mangalmurti, a critical care physician and researcher at the University of Pennsylvania, was a pulmonary critical care fellow in 2005, she became interested in how transfused RBCs could cause lung injury. That research provided one of the first hints that RBCs could interact with the immune system, but that was in the context of transfused cells.

Over the past decade, though, Mangalmurti’s team and other groups have found that both transfused and circulating RBCs are not just bags of hemoglobin, but “actually have a multitude of non­–gas exchanging functions,” she says, that “probably have an effect on the host response that we’ve just ignored for all these years.” In 2018, for instance, her group showed that RBCs use TLR9 to scavenge cell-free mitochondrial DNA, which is present at low levels during normal cellular turnover and circulates at high levels during illness or extensive cell death.

Following their 2018 publication, the researchers had some open questions. First, they wanted to know where TLR9, a receptor involved in immune response, is in the RBCs. In the new study, they show that the DNA-binding domains of TLR9 can be found on the cell surface of both human and mouse RBCs. They also find that, normally, some TLR9 is detectable on a small percentage of healthy RBCs, but in patients with sepsis or malaria, upward of 40 percent of RBCs had detectable TLR9 on their membranes.

Changes in surface protein levels are unexpected because RBCs don’t have nuclei and thus can’t change their expression of genes and consequent protein levels based on environmental cues. So to understand what they were seeing, the authors treated RBCs in vitro with DNA. They found that the cells underwent changes in their membranes and took on weird shapes that exposed more TLR9 nucleic acid–binding domains, which likely explains the increase seen in patient blood samples.

Mangalmurti and colleagues also used antibody staining to show that these morphological changes mask the CD47 antigen that RBCs display. CD47 acts like a company badge to indicate to the immune system that red cells belong—their so-called sense of self. Without it, they can appear foreign. Indeed, the researchers exposed RBCs to DNA or saline, then infused the cells into mice. Within hours, the DNA-exposed cells were engulfed by white blood cells in the animals’ spleens, which triggered increases in innate immune signals, such as interferon, in the spleen. 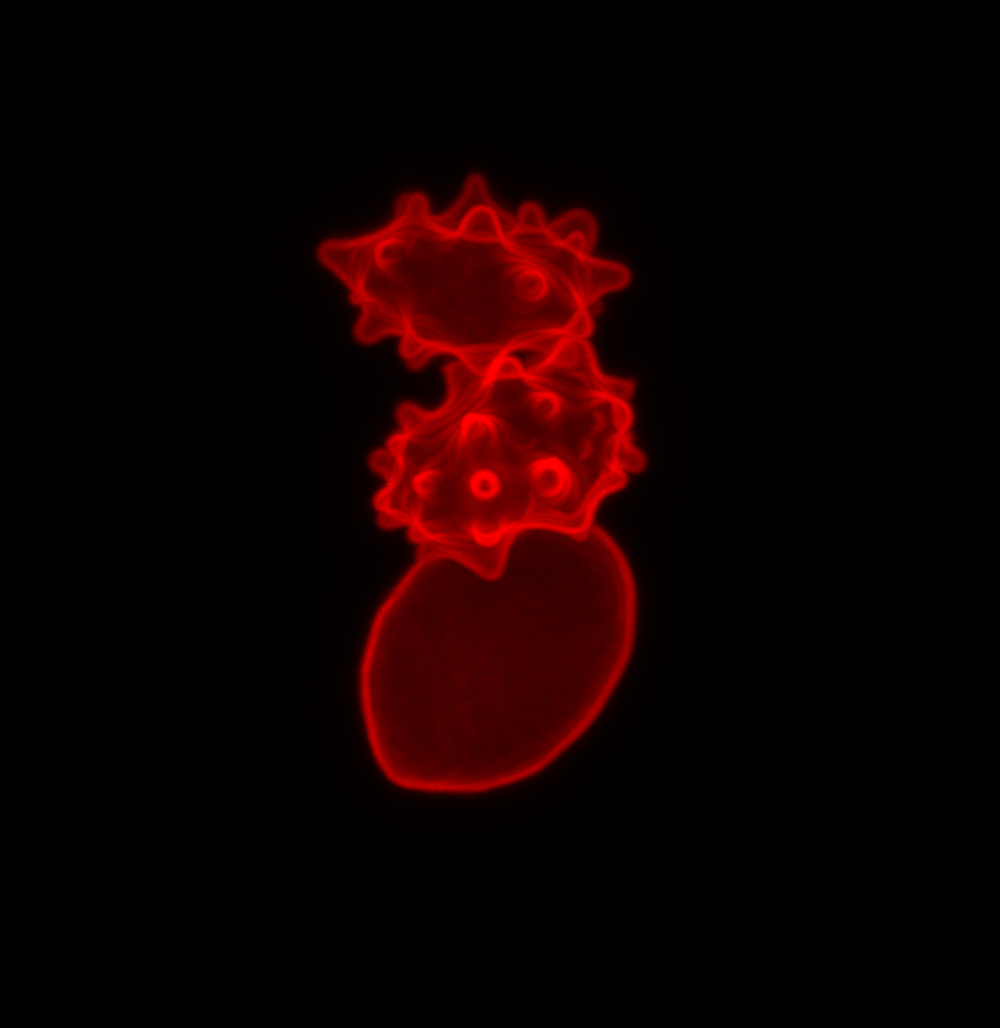 The removal of RBCs from circulation also seems to have a role in anemia, which is common in patients in intensive care units. In people with sepsis and anemia, the researchers found more DNA associated with RBCs than in patients with sepsis who did not have anemia. It’s also been shown that circulating mitochondrial DNA is increased during COVID-19 infections. When the authors looked, they found that the amount of mitochondrial DNA stuck to the red cells correlated with disease severity in COVID-19 patients.

During normal conditions RBCs live their 120 days in circulation, occasionally picking up DNA, and then get cleared, Mangalmurti explains. “But when there’s an acute inflammatory insult, they’re really picking up the DNA, losing their sense of self, getting cleared, and triggering the innate immune response.” In critically ill patients, this can result in acute inflammatory anemia and strangely shaped RBCs, which physicians have seen for years without understanding why.

“The role of RBCs in pathogen sensing is often overlooked,” Sizun Jiang, who investigates host-disease interactions at Beth Israel Deaconess Medical Center and Harvard Medical School and was not involved in the work, writes in an email to The Scientist. “The authors did a fantastic job of identifying TLR9 on the surface of RBCs, adding to the growing number of studies defying the traditional view” that TLR9 is only found inside cells, he adds.

“The paper indicates that red blood cells can serve as innate immune cells,” not just oxygen transporters, says Rio Sugimura, a biomedical engineer at the University of Hong Kong who was not involved in the study. Sugimura’s group makes red blood cells more easily than T cells in the lab, he says, which raises the possibility that RBCs could be engineered to prime immune defenses against pathogens or other attacks.

Another potential application, according to Rafael Polidoro Alves Barbosa, an immunologist at Indiana School of Medicine who was not involved in the study, is “to develop early biomarkers of systemic inflammation.” If researchers could detect an increase in the nucleic acid-positive population of RBCs and track its levels over time, he explains, it could signal the need for intervention without the need for more complex diagnostic tests.

Mangalmurti agrees that the potential for diagnostics and therapeutics is there. “Just thinking about these red cells differently and how these findings might apply to different diseases is really fun,” she says. In COVID-19 infections, for instance, people who are infected with the same pathogen have different responses. “Red cells might be very different in different patients,” which could help explain the variation in disease severity, she explains. “I’m really hoping that this is going to be the start of a lot more people looking into red cells and their immune function.”