ABOVE: Neural progenitors in a human brain organoid are labeled in purple/red and newborn neurons are labeled in green.
CHARLES ARBER, SELINA WRAY, CHRISTOPHER LOVEJOY

Charlie Arber, a stem cell biologist at University College London, works with induced pluripotent stem cell models of inherited forms of dementia. When he and his colleagues started studying several cell lines derived from patients with familial forms of Alzheimer’s disease a few years ago, one of the first things that they noticed was that the cells developed into neurons more quickly than stem cells derived from healthy individuals did, he says.

The researchers looked more closely at the Alzheimer’s cell lines and, in a study published January 12 in Cell Reports, confirmed that neurogenesis—the production of neurons from precursors—in these lines does happen much sooner. When they looked in the brains of familial Alzheimer’s patients after death, they found fewer newborn neurons than in the brains of healthy donors, indicating that the premature neurogenesis observed in stem cell lines is likely a feature of familial Alzheimer’s disease that leads to bursts of newborn neurons in early adulthood followed by defects in neurogenesis as people age.

Well before this study, scientists have suspected that adult neurogenesis and Alzheimer’s disease are linked. In 1998, Rusty Gage, a neuroscientist at the Salk Institute, and colleagues examined human brains postmortem and found evidence for adult neurogenesis in the hippocampus, the brain center linked with learning, memory, and emotional responses—several of the cognitive tasks that are disrupted in Alzheimer’s disease. The birth of neurons had been previously shown in rodents and nonhuman primates, but not people.

Neural stem cells in the granule cell layer (GCL) and subgranular layer (SGL) of the dentate gyrus of the hippocampus are indicated by arrows. Cell nuclei are blue.
Ahmed Disouky

Researchers have been making progress looking directly at neurogenesis in people, but their efforts are not without challenges.

As a graduate student, María Llorens-Martín, now a neuroscientist at the Autonomous University of Madrid, showed that increasing adult neurogenesis had neuroprotective effects on mice that were cognitively impaired. Then, as a postdoc about 10 years ago, she started collecting human brain samples to study adult neurogenesis in people. But she quickly realized that the samples that are available in most brain banks are not suitable for studying adult neurogenesis because of how they’re processed and preserved.

When the researchers compared healthy subjects with patients who had cognitive impairment—in particular, those with Alzheimer’s disease—the reduction in the number of new neurons was dramatic.

When a brain is donated to a brain bank, the standard procedure usually involves immersing the tissue in fixative for several weeks, which later allows researchers to cut thin tissue sections and image them. But that lengthy process fixes telltale markers of newborn neurons so that the antibodies researchers use to detect them don’t work on the samples, Llorens-Martín explains.

When the researchers fixed brains for 24 hours instead, they were able to detect evidence of neurogenesis in the hippocampus. In a study published in 2019, Llorens-Martín and her colleagues confirmed prior work showing that adult neurogenesis gradually decreases with age, even in healthy people. And when the researchers compared healthy subjects with patients who had cognitive impairment—in particular, those with Alzheimer’s disease—the reduction in the number of new neurons was dramatic. “Even in very young subjects that were diagnosed as Alzheimer’s disease patients, the number of new neurons was very much reduced compared to the neurologically healthy aged subjects,” she says.

In another 2019 study, a group led by Orly Lazarov, a neuroscientist at the University of Illinois at Chicago, examined the postmortem hippocampi of 18 people between 79 and 99 years old. They found evidence of neurogenesis in all subjects, including those diagnosed with mild cognitive impairment or Alzheimer’s disease. The number of neural progenitors and newborn neurons was associated with cognitive status: people with higher numbers of these cells generally had higher cognitive scores and a less severe diagnosis.

“There’s more and more evidence to suggest that adult hippocampal neurogenesis plays a major role in Alzheimer’s disease cognitive decline,” says Lazarov. Her work and that of others has shown that neurogenesis is impaired early in Alzheimer’s disease (AD). In mouse models, for instance, her group has found differences in neurogenesis as early as two and three months of age—the equivalent of a person in their 20s. They and others have also found that further depleting neurogenesis exacerbates cognitive defects in AD rodent models. It’s possible that “impairments in neurogenesis are not just a side effect of AD pathology,” she says, but “part of the mechanism by which memory is impaired in the disease.”

In their latest paper, Arber and colleagues show that neurogenesis in induced pluripotent stem cells looks similar to what happens in the human brain, meaning that stem cell models could help address the question of cause or effect. And if indeed defects in neurogenesis are driving neurodegeneration, a new avenue to intervention opens up. 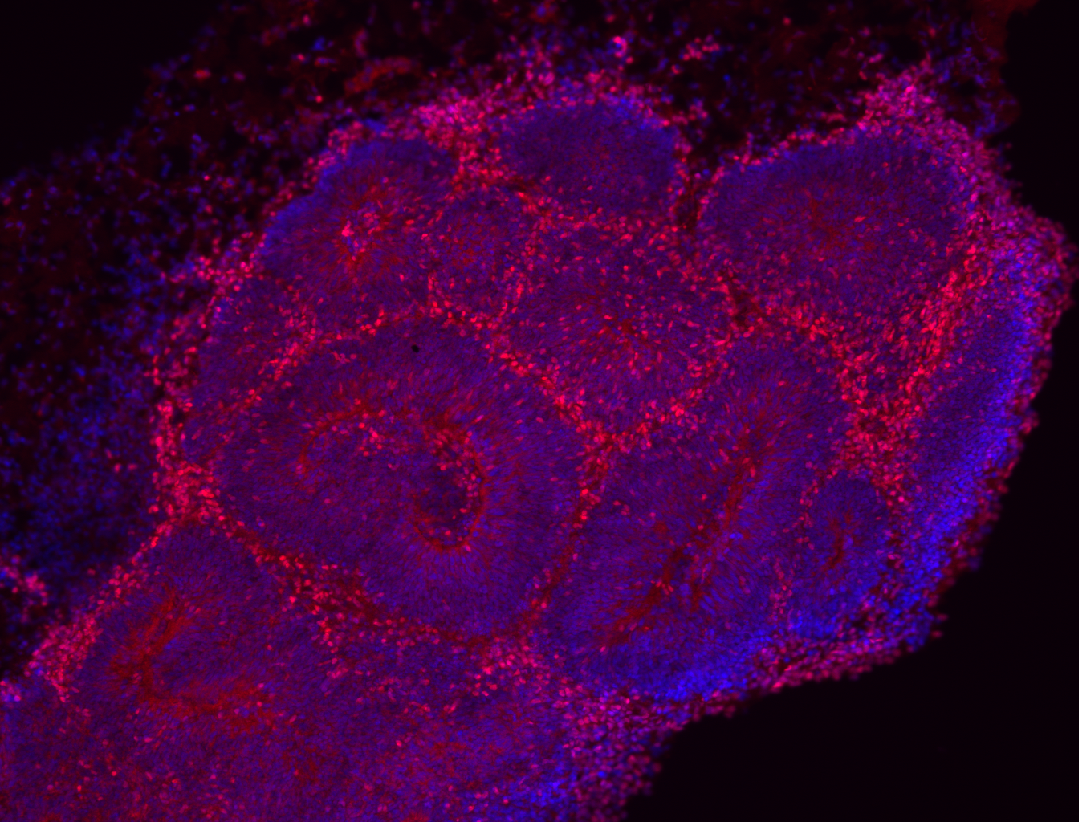 All cells in a human brain organoid are labeled in blue and newborn neurons are in red.
Charles Arber, Selina Wray, Christopher Lovejoy

“We diagnose people at seventy years old or seventy-five years old. That’s too late to intervene,” says Caghan Kizil, a neuroscientist at the German Center for Neurodegenerative Diseases. “But we know that the molecular or pathological onset starts much earlier,” he adds, and that means there’s a chance scientists and physicians could stall the process, perhaps by tweaking neurogenesis.

In a study published in January 2020, Kizil and colleagues identified two different populations of neural stem cells that respond to signaling pathways that regulate neurogenesis in a zebrafish model of Alzheimer’s disease. They found a role for brain-derived neurotrophic factor (BDNF), a protein that when elevated was also implicated in cognitive improvements in a mouse model of Alzheimer’s disease. BDNF supports neuron survival, maturation, and maintenance in healthy brains. In the study, Rudolph Tanzi, a neuroscientist at Harvard University, Gage, and colleagues improved cognition in the animals by stimulating neurogenesis either genetically or with drugs and artificially raising BDNF levels in the hippocampus. The findings indicate that manipulating neurogenesis and tweaking neuron survival could be a possible treatment for Alzheimer’s disease.

The next steps for research and treatment

Even if researchers develop therapeutics that block or reduce the progression of the disease, they will not reverse the damage, says Nicolas Toni, a neuroscientist at Lausanne University Hospital in Switzerland and a former Gage lab postdoc. “Neural death has already occurred once the patient recognizes he or she has memory issues, and these neurons are lost,” he says, but adult neurogenesis in the hippocampus could be a way to partially right that wrong. “The most important question is, can we manipulate adult neurogenesis? And is that sufficient to alleviate some of the symptoms of Alzheimer’s disease?”

Developing pharmaceuticals that increase neurogenesis and an inexpensive, live-imaging strategy or a diagnostic test that can directly link neurogenesis and cognition in people will be important steps, but far in the future, Gage says. “At least in rodents, where increased neurogenesis has positive impacts, there’s very little evidence that you can hurt yourself by increasing your neurogenesis, but there’s always [safety] as a concern,” he adds.

The most difficult question to answer, according to Llorens-Martín, is what happens to the few new neurons that are born in the brains of people with neurodegeneration. “What is failing in the environment that is making these neurons die prematurely or making it very difficult for them to get connected appropriately?” she says. “It is known that systemic changes occur in in blood, for example, in Alzheimer’s disease patients several decades before the appearance of the cognitive impairments,” she says. It’s possible that those changes in the systemic environment or the environment of the brain are somehow decreasing the neurogenic potential of the hippocampus, she adds.