Humans tend to embrace good news, while discounting bad news. We overestimate our odds of winning the lottery or living long lives, while underplaying our risk of cancer, divorce, or unemployment. Now, researchers from University College London (UCL) have found a way of removing these rose-tinted glasses, by aiming a magnetic field at a brain region called the left inferior frontal gyrus (IFG). Their results are published today in the Proceedings of the National Academy of Sciences.

“So much of the work on psychological biases over the decades has been correlational,” said Dominic Johnson, a political scientist from the University of Oxford, who was not involved in the study. “Here we have a rare example of a direct manipulation experiment. This is a great step forward and promises to open up whole new avenues for research in this area.”

The optimism bias was recognised decades ago, and seems to exist across genders, nationalities, races, and ages. UCL’s Tali Sharot has been studying how the brain creates this bias since 2007. In an earlier study using functional magnetic resonance imaging (fMRI), she had linked the IFG to people’s ability to update their beliefs with new information. “The left IFG was tracking information that was better than expected, and the right IFG was tracking information that was worse than expected,” she said, “and [the right IFG] wasn’t doing as efficient a job.”

“But fMRI only gives us a correlation,” Sharot added. “To show causation, we wanted to see whether manipulating these brain regions would alter how people learn from good and bad information.” She and UCL colleague Ryota Kanai used transcranial magnetic stimulation (TMS)—a technique for temporarily shutting off part of the brain—to disrupt the right IFG, the left IFG, or an unrelated area in 30 volunteers. Five minutes later, the researchers asked the volunteers to estimate their chances of experiencing 40 different nasty fates, from Alzheimer’s disease to robbery. Sharot and Kanai then revealed the actual frequencies of each event and, later, asked the volunteers to recalculate their estimates.

Optimism bias was alive and well among volunteers receiving TMS to the right IFG or the unrelated region, who were more likely to update their beliefs when the bad events were less common than expected. But such bias vanished in the group whose left IFGs were disrupted who, on average, gave equal weight to statistics showing that events were either more or less likely than they had expected. Questionnaires revealed that TMS did not affect other traits that could have explained the volunteers’ changed behavior, such as emotional arousal or negativity. Nor did the treatment affect their memory—they were just as likely to remember the actual probabilities that they had been told, no matter where the magnetic fields were aimed.

Based on her earlier work, Sharot thought that disrupting the left IFG would reduce the optimism bias by reducing our ability to learn from good news, while disrupting the right IFG would boost a person’s inclination towards good news. Her results showed otherwise. In fact, with the left area shut down, people were just as likely to adjust their beliefs based on good news, but better at adjusting their beliefs based on bad news.

“There are many implications of such research, from potential mechanisms of depression at a personal level, to ignoring financial errors at a societal one,” said Daniel Bor, a neuroscientist from the University of Cambridge, who did not participate in the research. However, he added, “previous research in this area has more implicated the right, rather than the left, IFG. More research needs to be carried out to further validate and explore this intriguing finding.”

Sharot and Kanai also found some individual variations. Even though disrupting the left IFG negated optimistic tendencies on average, 40 percent of the volunteers still showed the bias. “This raises interesting questions about whether some people have a greater or lesser ability to resist cognitive biases,” said Johnson, although he noted that “some of this variation is likely due to noise or the treatment not working for whatever reason.”

Of course, it may not always be beneficial to suppress such natural biases. Unwarranted optimism can lead us to take unnecessary risks with our health or finances, but Sharot and Kanai noted that it could also be adaptive, by encouraging people to try new things or avoid the stress of potential illness or failure.

In certain cases, however, Sharot thinks that her work might have clinical relevance. Targeting the right brain area could, for example, help boost optimism in people who tend to lack it, such as those with depression. “If you start off in depressed individuals, my hypothesis would be that disrupting the right IFG would create a bias that isn’t there,” she said. 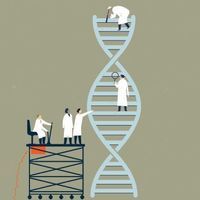