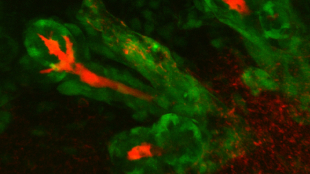 Bioengineered salivary gland (green, GFP-epithelial cells and TRITC-gelatin-injected)TSUJI ET AL.A team led by investigators at the Tokyo University of Science (TUS) has created precursors to salivary and lacrimal glands that, when transplanted into mice, successfully connected to the host ducts and nervous system. Once connected, these lab-grown secretory glands helped to restore the production of saliva and tears in animals from which healthy salivary or lacrimal glands had previously been excised. TUS’s Takashi Tsuji and colleagues reported their results in two papers published today (October 1) in Nature Communications.

“People have done a lot of work with stem cells, but this is the first time I’ve seen transplantation of a whole [bioengineered] salivary gland,” said the University of Buffalo’s Olga Baker, an assistant professor of oral biology, who was not involved in the work. “To my knowledge, this is a first.”

Dysfunction of the salivary and...

To create the secretory glands, Tsuji and his colleagues built on previous work that used a bioengineering technique they developed to reconstitute organ germs from teeth and hair follicles via a 3-D cell processing method.

First, they created the glandular precursors—or “germs”—in vitro using single epithelial and mesenchymal cells isolated from embryonic glands. After three days in organ culture, the bioengineered glands had undergone branching morphogenesis, followed by stalk elongation and cleft formation—three tell-tale signs of organogenesis. By that time, the researchers also observed an accumulation of saliva in the ducts of the bioengineered salivary gland germs.

Tsuji’s team next engrafted these secretory gland germs in mice—from which healthy salivary or lacrimal glands had been removed—using a nylon thread-guided, interepithelial tissue-connecting plastic method it published in Nature Communications last year. Not only did the precursor secretory glands innervate, but in response to stimulation by the nervous system, they began to secrete saliva and tears, moistening dry mouths and eyes in the animal models.

“We have provided a proof-of-concept for bioengineered secretory organ replacement,” study coauthor Masatoshi Hirayama, an assistant professor of ophthalmology at the Keio University School of Medicine in Japan, told The Scientist in an e-mail. “The bioengineered glands developed in vivo with the correct connection to the recipient parotid or lacrimal gland duct, which was confirmed by the transport of saliva and tears without leaking.”

Though the transplanted bioengineered salivary gland—which was about a third of the size of the construct it’s meant to replace—did secrete saliva, it was not of the quantity and quality to fully replace fluid produced by a healthy, full-grown gland, Baker said. Further, the study did not indicate “whether the blood supply can reach the transplanted gland,” which would be critical for survival. “It would be interesting to know how the cells in the transplanted gland develop beyond [what] is reported,” she added.

Much remains to be seen before lab-grown salivary and tear glands are ready for use in humans. For example, the cells that Tsuji’s team used to create these organ germs are not ideal for clinical use.

“To fully realize the practical clinical application of secretory gland regeneration, suitable cell sources must be identified,” said Hirayama. To that end, the team is working to see whether human embryonic or induced pluripotent stem cells can be prodded to form functional glands in the lab. “We will need to identify cell sources from various tissue-derived stem cell populations isolated from patients who have the organ-inducible ability to reproduce the epithelial and mesenchymal interactions for organogenesis,” Hirayama added.

In addition, the clinical potential of the particular engraftment approach the team took must be evaluated in the context of both health and disease. Transplanting a lab-grown gland into diseased tissue, which is often subject to inflammation, will likely be more difficult than engrafting an organ germ into a healthy host. “Further investigation of the clinical application of these methods, including engraftment and recipient niches for organ regeneration, will contribute to the development of . . . gland regeneration therapy in humans,” Hirayama said.

Still, the study points the way to building replacement secretory glands for humans. And the bioengineering approach may be more widely applicable, said Hirayama, to not only other glands and sense organs, “but also endodermal endocrine organs, including the liver and pancreas.”